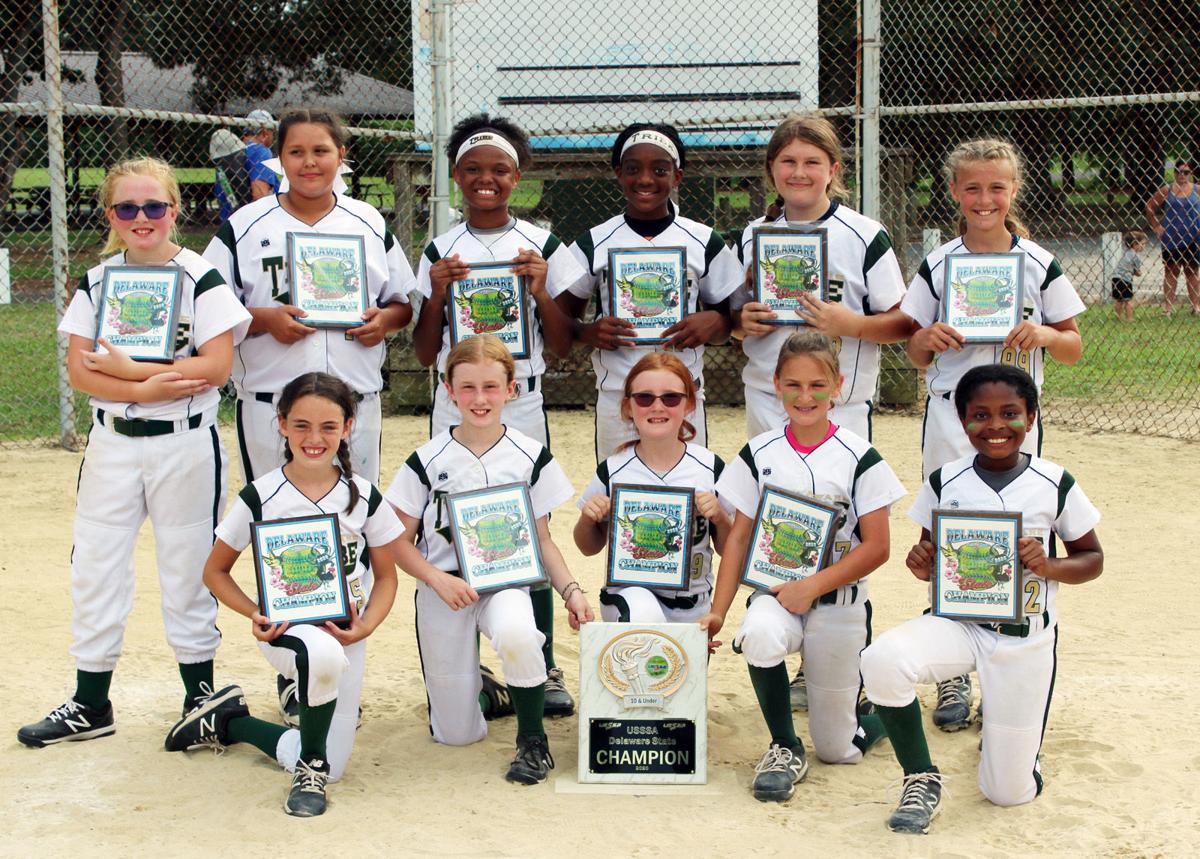 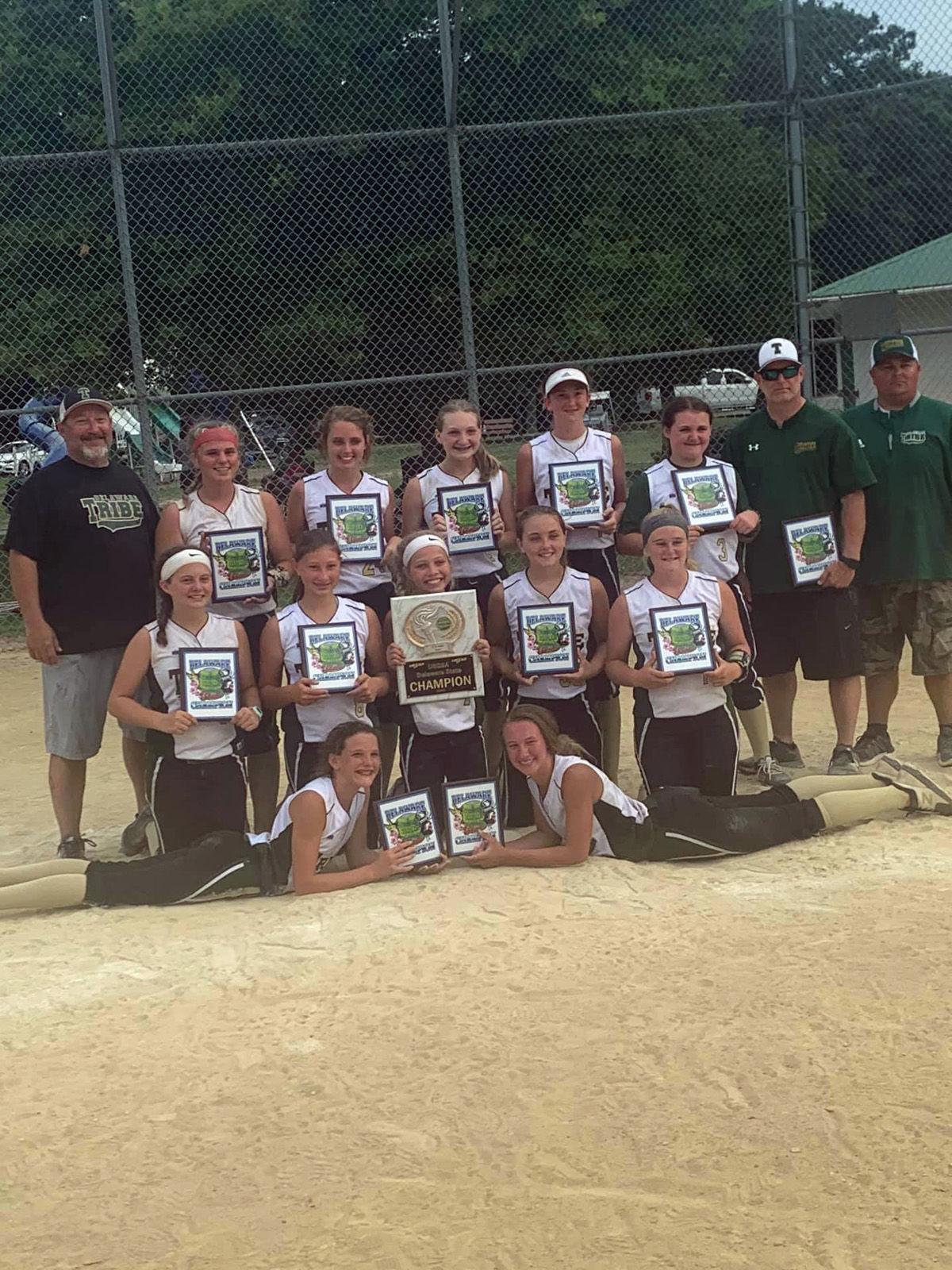 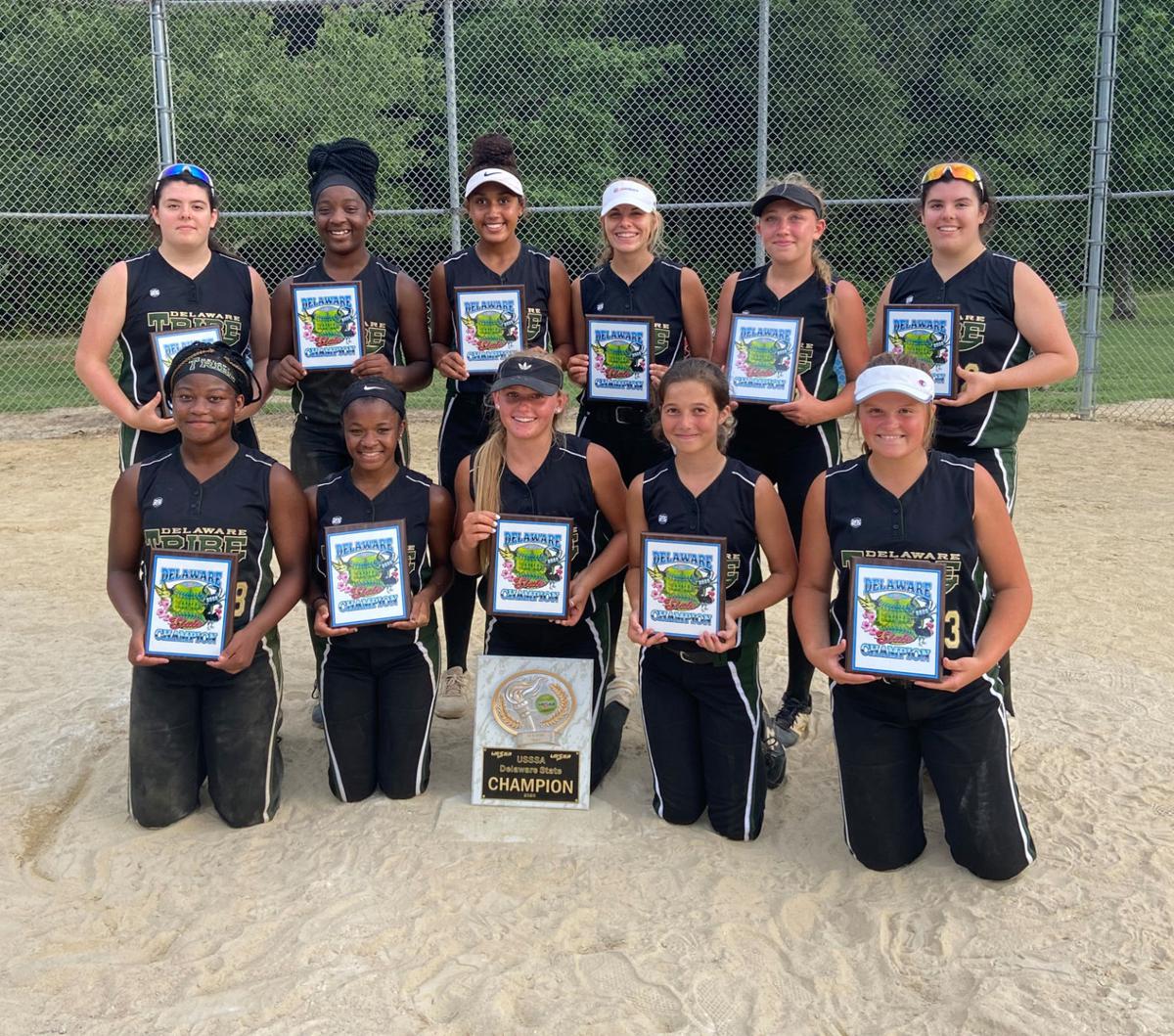 The Delaware Tribe is one of those great programs, and the proof is in the hardware. Last weekend, the Tribe sent three different teams — 14U, 12U and 10U — to the Delaware State Championship tournament, and all three teams walked away with the coveted state title in their respective division.

Even more impressive — all three teams went undefeated en route to the championships. It is not known officially, but it is believed it was the first time in state tournament history that one program has taken the title in all three divisions.

“Watching all three Tribe teams take the states was one for the memory books for me,” said Tribe 14U head coach Sarah Hoban. “After our 14U finals finished, I raced over to the 12U game where my youngest daughter [Grace Hoban] was pitching, and got there just in time to see the winning run cross home plate. Their team erupted from the dugout! I turned around, and there was the 10U coach [Tim Hall], who had brought the majority of his young team to come cheer on the older girls.

“It’s what I love about this organization. We have dedicated coaches all around that work to teach the game of softball, and realize all of the other important life lessons this game has to offer. When I say I could not be prouder of my team, it is not only because of their amazing talents and hard work on the field, but also for the true role models they are off the field.

“I have been blessed with the opportunity to coach an amazing group of young ladies with supportive families and love that the younger girls have them to look up to. It truly is a ‘tribe,’ from the coaches, players and family that support us through it all.”

In the championship game, the Tribe shutdown and shutout the Delaware Diamonds, 8-0.

It was the 14U Tribe’s first tournament of the season playing as a 14U team. Since last fall, they have posted a 36-9-1 overall mark, with most of their competition coming against 16U teams.

“This has been a crazy spring with the COVID-19 virus,” Hoban said of the preparation, or lack thereof, due to the pandemic. “All of our girls were very disappointed that their school ball season was canceled — especially those entering their freshman year at the varsity level. I was very impressed with how the team adjusted to the virtual workouts during the quarantine period. They showed that they were able to hold themselves accountable, while working on their craft from home. This break was the longest some of these girls have been without seeing each other since 2016.”

Laniya Lewis led the team offensively, hitting .556 for the weekend, with a home run in Game 1, and a clutch walk-off double in the semifinals against the Delmarva Freedom.

The Freedom “is a solid team with a great group of girls and coaches,” Hoban added of their opponents.

Bailey Ullman, Jaya Shaub and Lily Hoban all batted .500 over the five games, with Ullman leading the team with eight RBIs for the tournament. Lily Hoban added five RBIs to the offensive effort.

Camryn Ehlers and Kinsley Hall were the two-headed monster in the circle for the 14U Tribe. Both girls battled intense heat and humidity over the five games, to lead the team. Ehlers struck out eight, with Hall adding 10.

“Our outfield was flawless [last] weekend, with lots of action led by centerfielder Aniyah Blake,” continued Coach Hoban. “They all covered their ground and backed each other up. [Last] weekend was a total team effort, and I could not be more proud.”

On the 12U side of things, head coach Dennis Scurci saw his Tribe roll through the competition, including a convincing 12-2 win over the Delaware Fury Red in the semifinals to avenge their only loss of the 2020 season thus far.

In the title game, the Tribe came from behind to take out the Delaware Cobras, 7-5. Trailing 5-1 after two innings, the Tribe mounted their comeback, with Sam Witte driving in the game-tying run on a single in the third inning off an impressive 11-pitch at-bat. Sophie Scurci then plated Ava Snelsire for the game-winner in the fourth inning.

Grace Hoban picked up the win in the circle for the championship. On the weekend, Grace Hoban and Hayden Adkins combined for the 5-0 record with a 1.90 ERA, while throwing 70 percent of their pitches for strikes. The dynamic duo issued just three walks in five games.

During their perfect run to the state title, the Tribe outscored their opponents 55-9.

It was a stellar performance for the 12U Tribe, especially considering their lack of preparation and playing due to the COVID-19 pandemic. However, Coach Scurci still was able to get his girls ready when it mattered most.

“We had a lot of Zoom [video conferencing] calls to stay connected,” Scurci admitted. “We were able to get them something called a ‘Blast Sensor’ that attaches to the end of their bats. It connects to their phone, and sends video and information on their swings to my account. From there, we can see how the girls’ swings are progressing, or where they need to get more work.

“The girls are the best athletes of any team in the state, in my opinion. We have bonded very well. We voted on captains — Ryleigh Smith and Sophie Scurci — and they really took charge and became leaders for the team. We are a family. I could talk forever about these girls. I am so proud of them and all their work. There is some really good ball going on in this area.”

For the weekend, Smith batted a staggering .818, with a pair of doubles, a triple and seven RBIs. Sophie Scurci hit at a .643 clip, with two doubles, two triples, six RBIs and seven stolen bases. Ava Calciano chipped in a .625 batting performance, with three RBIs and six stolen bases.

“We faced some good teams, and that Cobra team really wreaked havoc on the base paths early,” added Coach Scurci, whose Tribe team is 35-5 overall since the fall, and 14-1 since the spring. “People don’t realize it, but there are a lot of great teams here in Delaware.”

The 12U Tribe will be heading to Virginia for a big tournament next weekend as they prepare for the USSSA Eastern Nationals World Series the weekend of July 15. They will also be playing in the USA Nationals during the first week of August.

The 10U Tribe squad cruised to an 8-0 win in the championship game, sweeping a 4-0 run to the title. Head coach Tim Hall said he was thrilled with the effort from his team, which consists of Kara Bak, Rogue Garcia, Aleandra Bennett, Cierra Lewis, Cheyanne Willey, Lauren Myers, Mikayla Pollard, Olivia Mekulski, Kylee Hutton, Autumn Willey and Timora Hall.

“It was our first action since the COVID-19 pandemic,” noted Coach Hall. “Going undefeated against good talent was definitely an accomplishment. Being able to put the pandemic and the summer heat aside to play the game these girls love, and actually win it all, was amazing.”

The Tribe took out the Delaware Ducks in the opener, 7-2, before slipping by the East Coast X-plosion, 4-3, in Game 2.

Another convincing win over the Ducks, 9-1, in the semifinals led the Tribe into the state championship game. There, they cruised to an 8-0 win over the Delaware Cobras for the title.

Cierra Lewis led the Tribe with a stellar performance in the circle. She went four scoreless innings, allowing just one hit, while striking out eight with four walks. The defense was behind her the whole way with strong play.

“The energy and sportsmanship these girls displayed was amazing. We are beyond proud of every single player on the team,” Hall said. “After COVID-19 interrupted team practices and canceled several tournaments, the team was able to quickly prepare for the Delaware state tournament and make it count.”