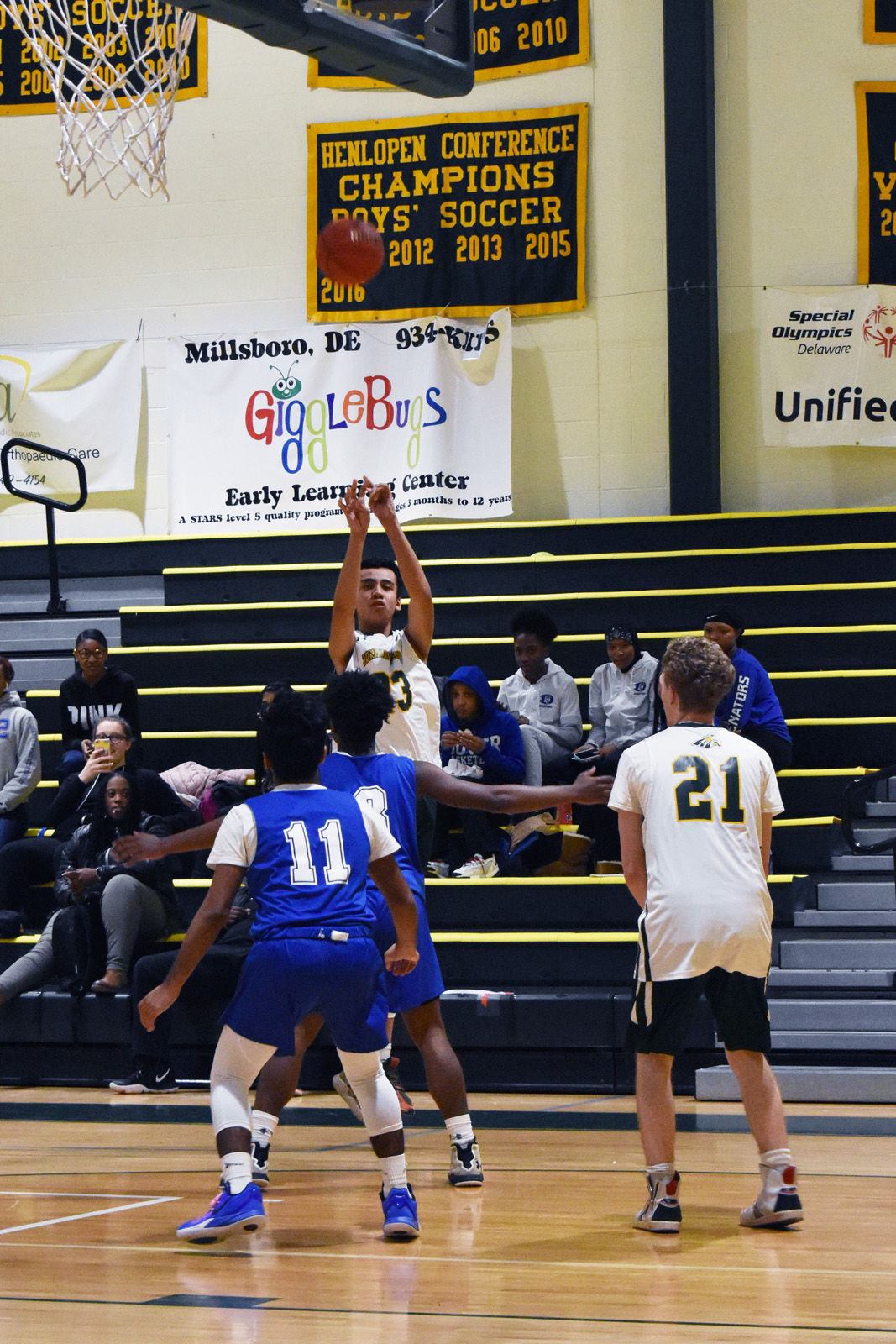 Indian River sophomore Gabe ‘Big Shot’ Mouynivong shoots over the Dover defense for one of his two three-point baskets in the Indians’ 24-18 win over Dover last week. Mouynivong led all scorers with 14 points in the victory. 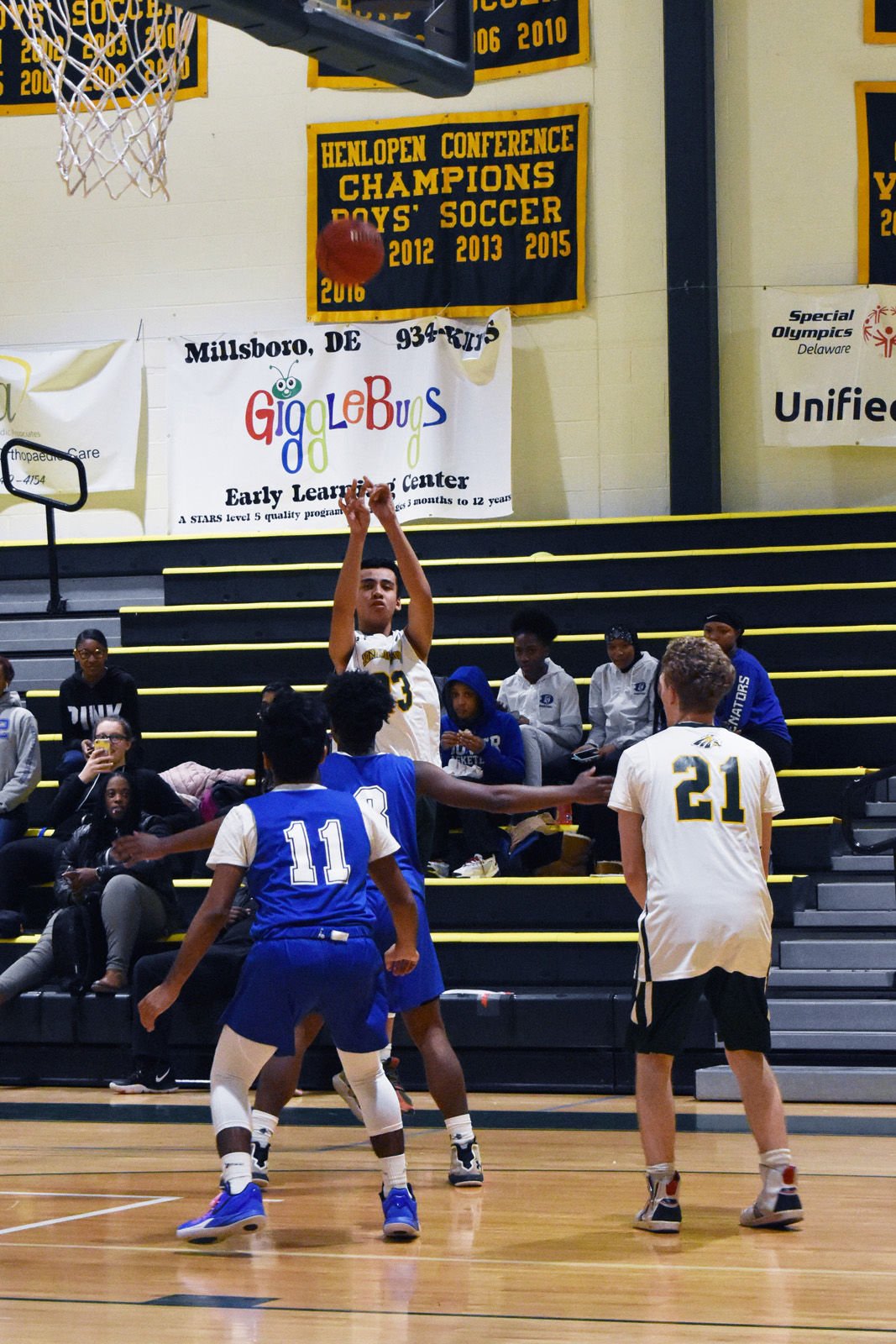 Indian River works toward a 24-18 win over Dover last week.

Indian River sophomore Gabe ‘Big Shot’ Mouynivong shoots over the Dover defense for one of his two three-point baskets in the Indians’ 24-18 win over Dover last week. Mouynivong led all scorers with 14 points in the victory.

Indian River works toward a 24-18 win over Dover last week.

In just their second season of existence, the Indian River High School Unified basketball team has certainly made a very good name for itself in the state, especially in the eyes of their DIAA peers.

The Indians wrapped up the regular-season portion of their 2020 season with an impressive 24-18 win over visiting Dover to clinch a 5-1 overall record, with their lone loss coming against defending DIAA state champion Caesar Rodney, 36-30, back on Jan. 30.

The win over Dover likely clinches for IR one of the top seeds in the upcoming DIAA state playoffs, as well as a home playoff game in the postseason showcase. They will find that out for sure on Friday, Feb. 28.

“We have played very well this season,” head coach Steve Kilby said. “We have had a lot of success, and that is a credit to the kids we have on this team. They are having a good time.”

In their most recent win over the Senators, the Indians were led by sophomore Gabe Mouynivong’s 14 points, including a pair of long distance “three-balls” that reinforced his nickname of “Big Shot Gabe.”

“Gabe was huge for us again, putting up 14 points even though he was not feeling well,” Kilby said of his leading scorer. “We are really proud of his efforts.”

Mouynivong and fellow Unified teammate Nariah Showell both hit key baskets in the game. They both were having a little extra fun by touching their index fingers to their noses to signal to the Dover fans in attendance to quiet down.

It was all in good fun for all the kids.

“We are really proud of Nariah and her efforts as well,” added Kilby. “She sunk two baskets and was really all smiles. Clara [Shepherd] continues to be our most enthusiastic player, giving her best efforts at all times.”

The Indians saw themselves facing a small 6-4 hole after the first quarter of play. However, Showell’s two big baskets, as well as Mouynivong’s first three and then a put-back layup, turned that deficit into a 13-11 advantage.

Both teams traded buckets in the third quarter, with the Senators making one more than their hosts and the teams heading into the final quarter deadlocked at 18-18.

Defense and rebounding are what led the Indians to a shutout in those final six minutes, especially Joseph “Mr. Windex” Snyder cleaning the glass of the errant Dover shots. IR created the final verdict by outscoring their guests, 6-0, to win the game.

“Joseph Snyder worked both end of the court, grabbing critical rebounds for us, and picked up some huge assists,” Kilby concluded. “Reece Stone and R.J. Rybicki also helped us with some key baskets.”

Now, the Indians turn their focus to the postseason, where they hope to take the next step in their progression as a program — one that sees them playing for the DIAA state title this year. They won’t have to wait much longer to find out where that journey begins.