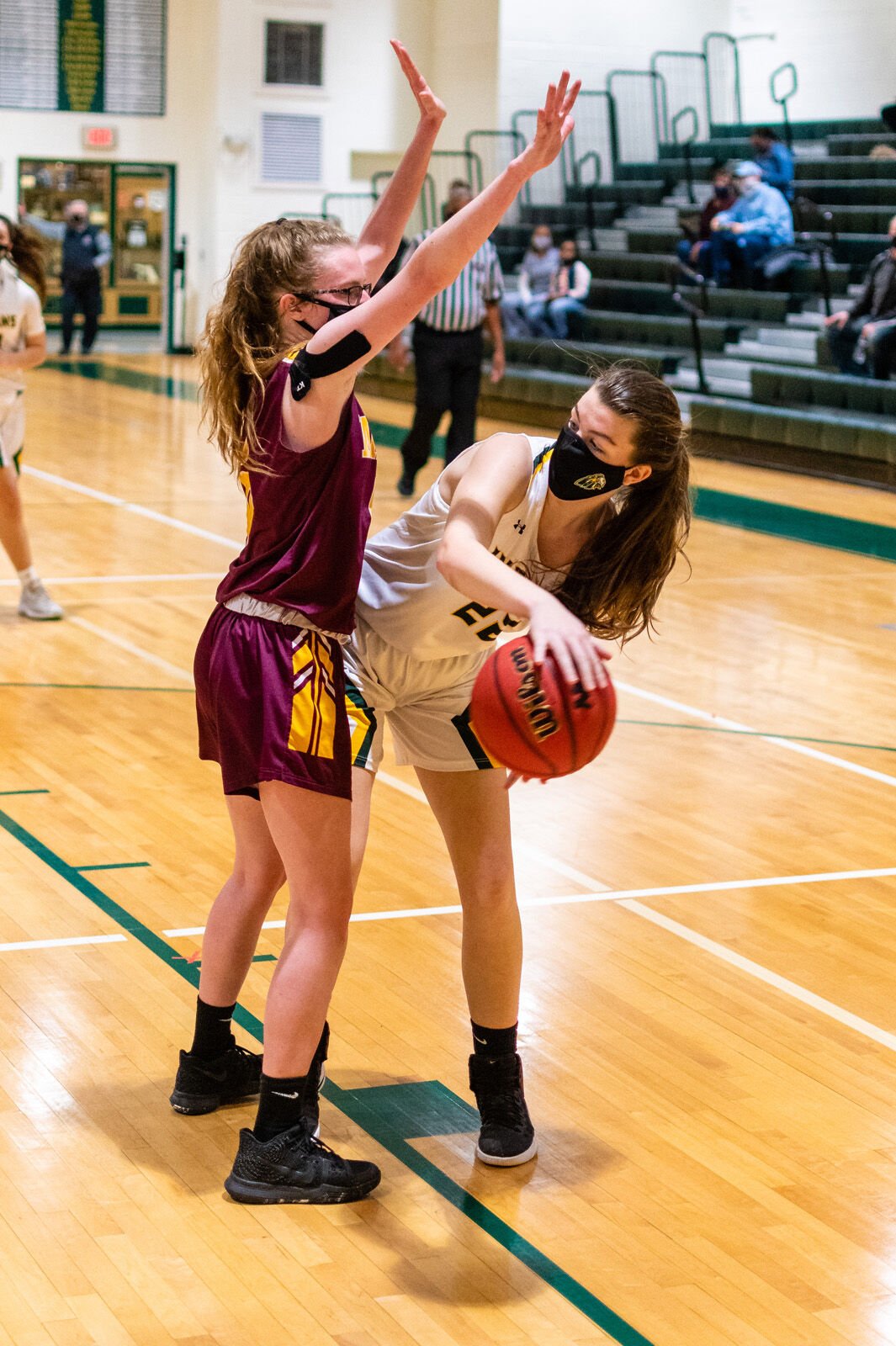 Indian River’s Faith Predeoux, right, makes a pass behind her defender in IR’s 38-21 win over Milford. 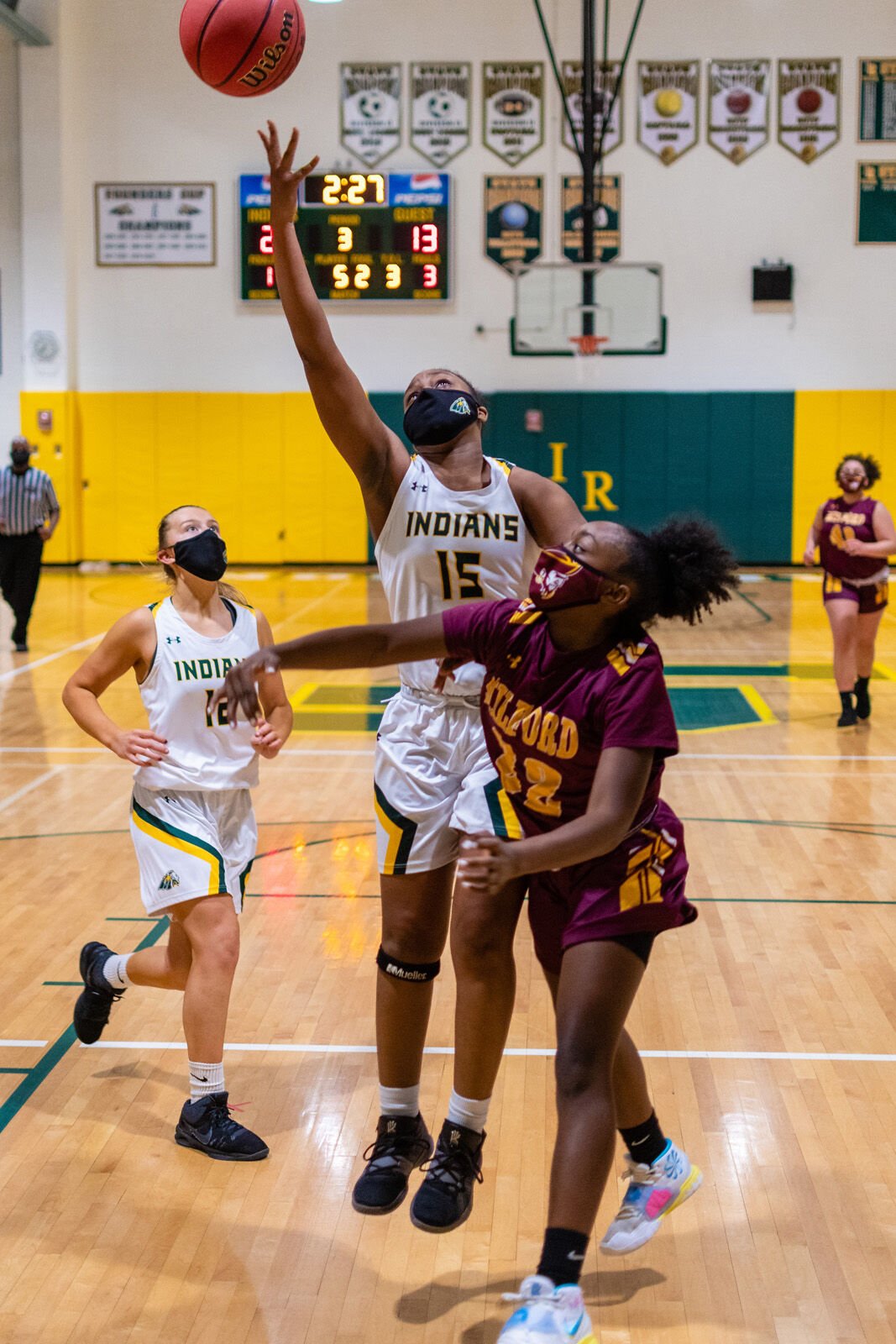 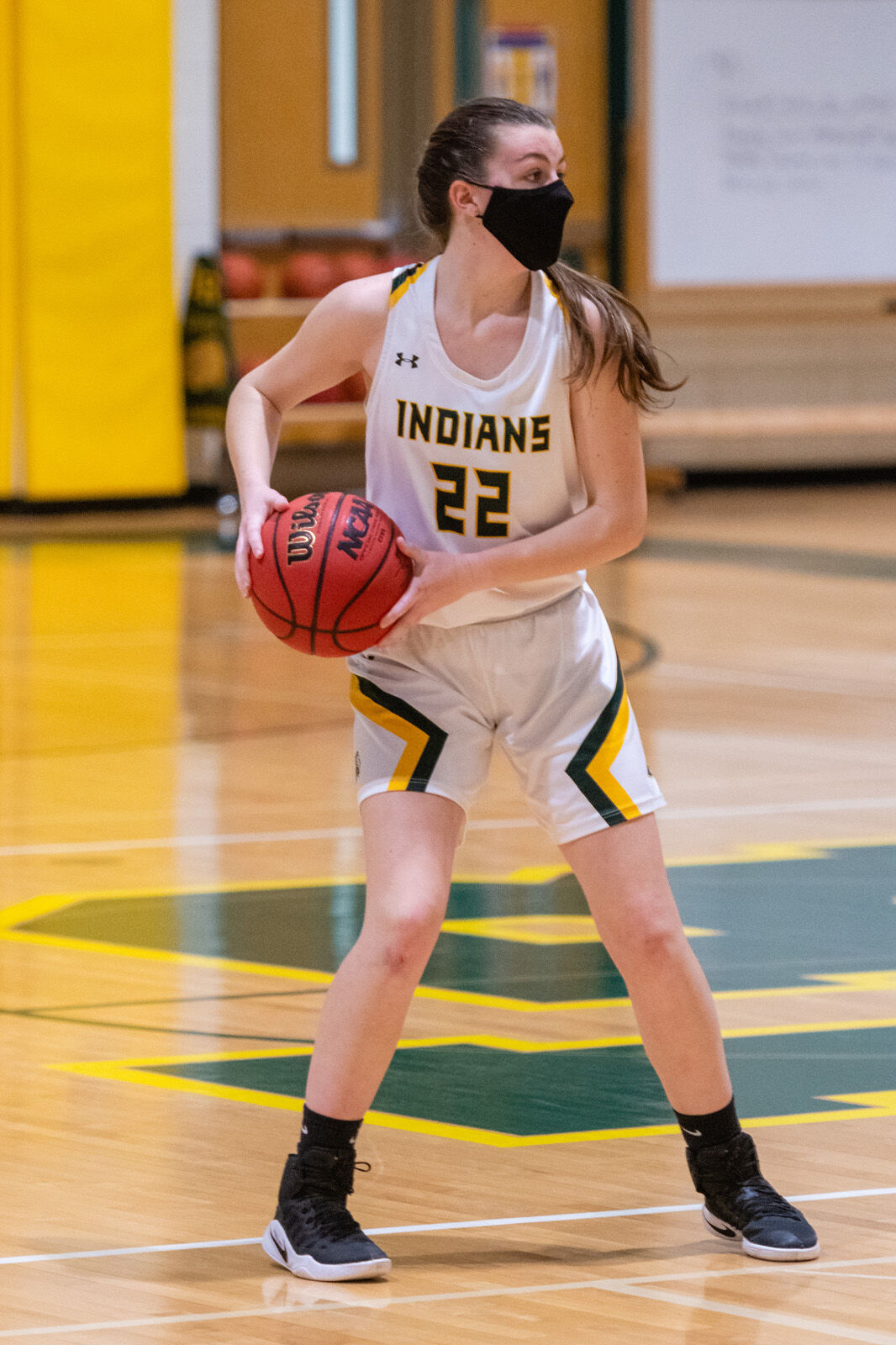 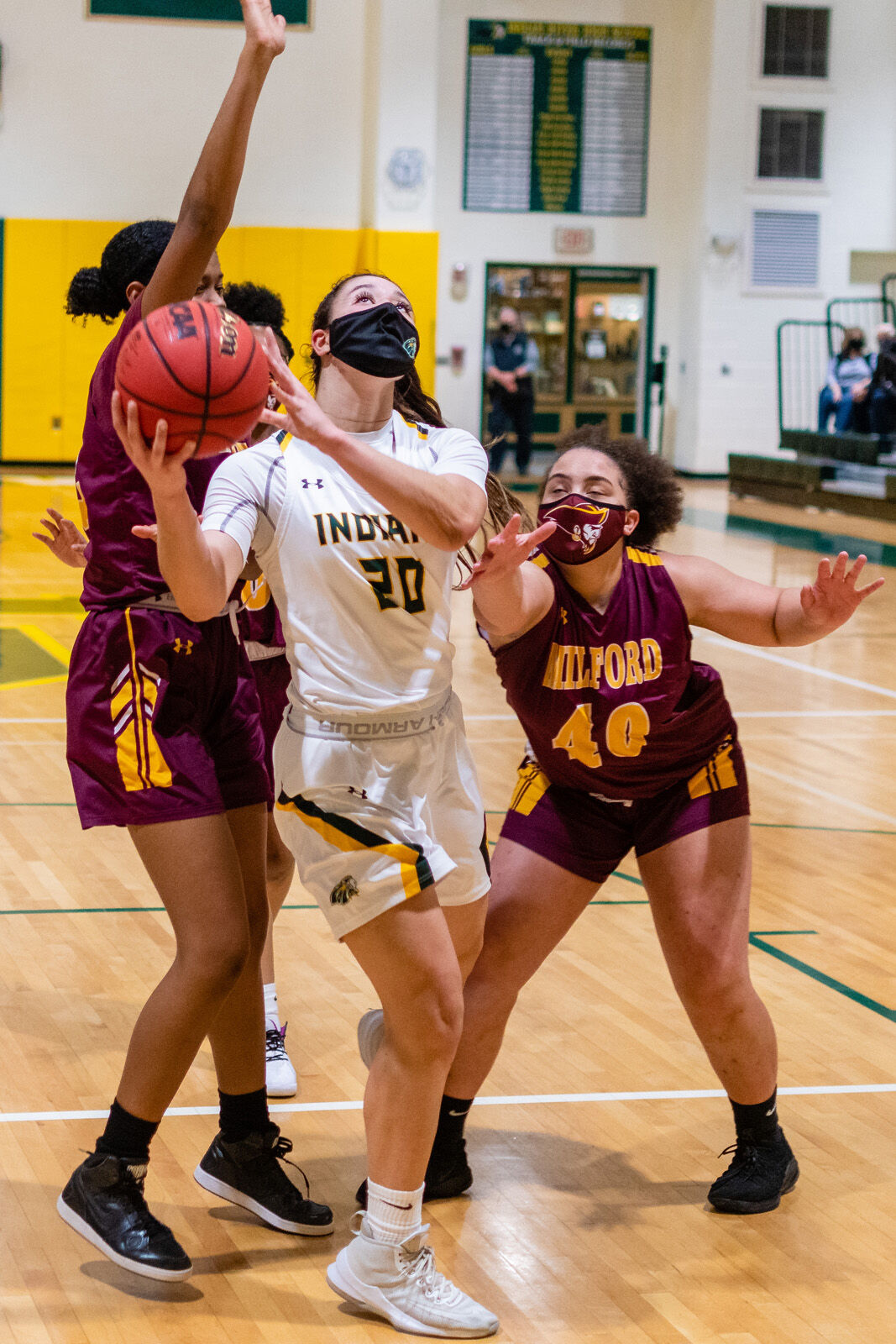 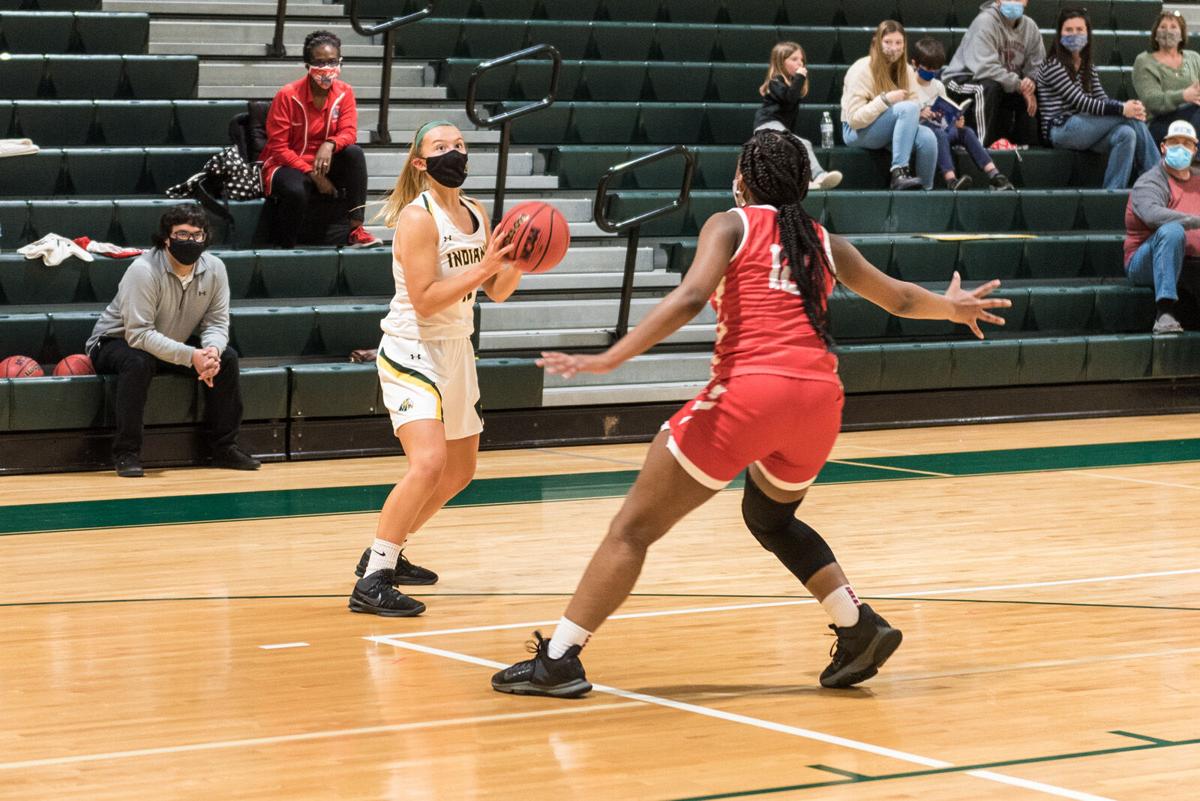 Indian River’s Savannah O’Shields eyes up a shot against Laurel on Wednesday, Feb. 24. 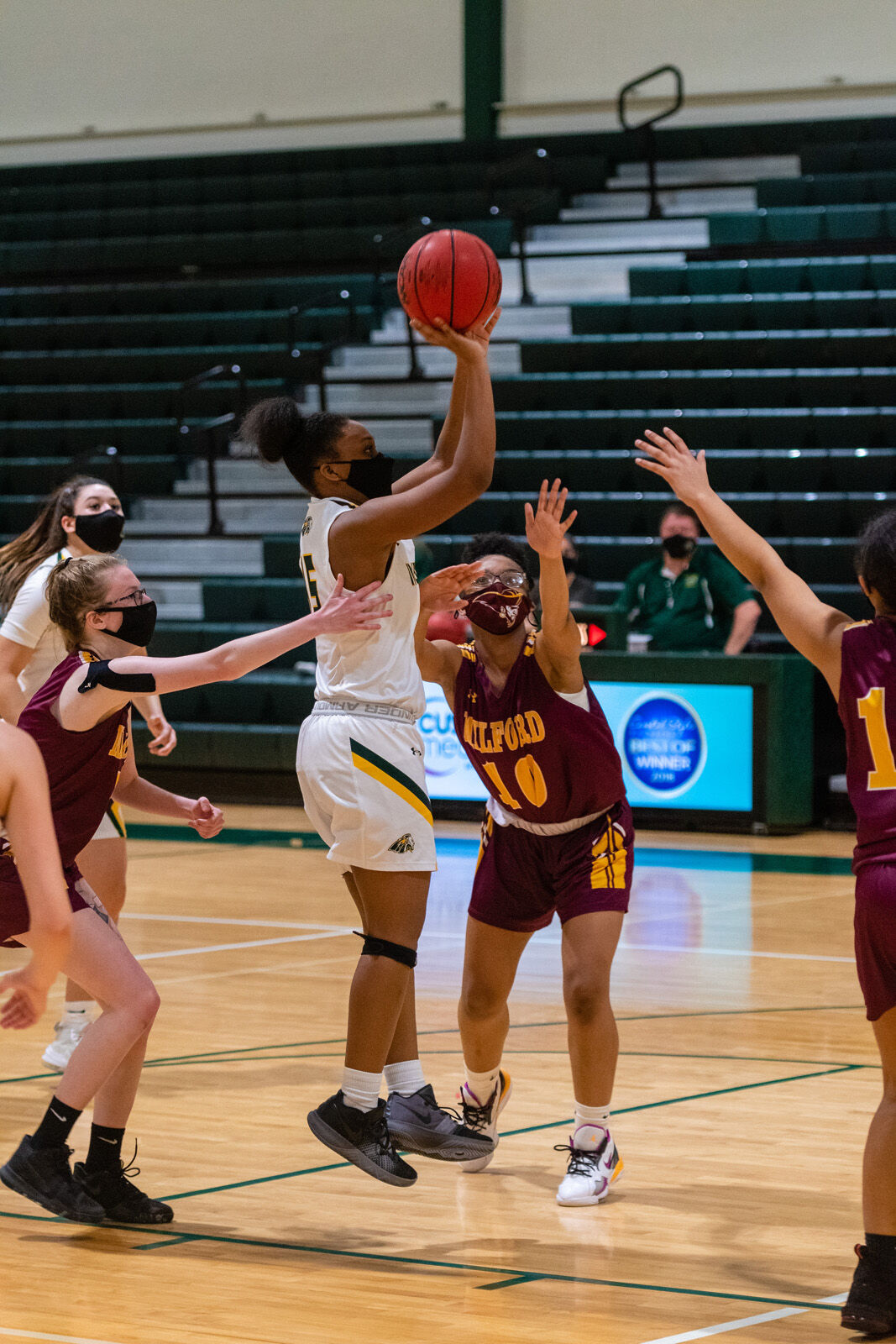 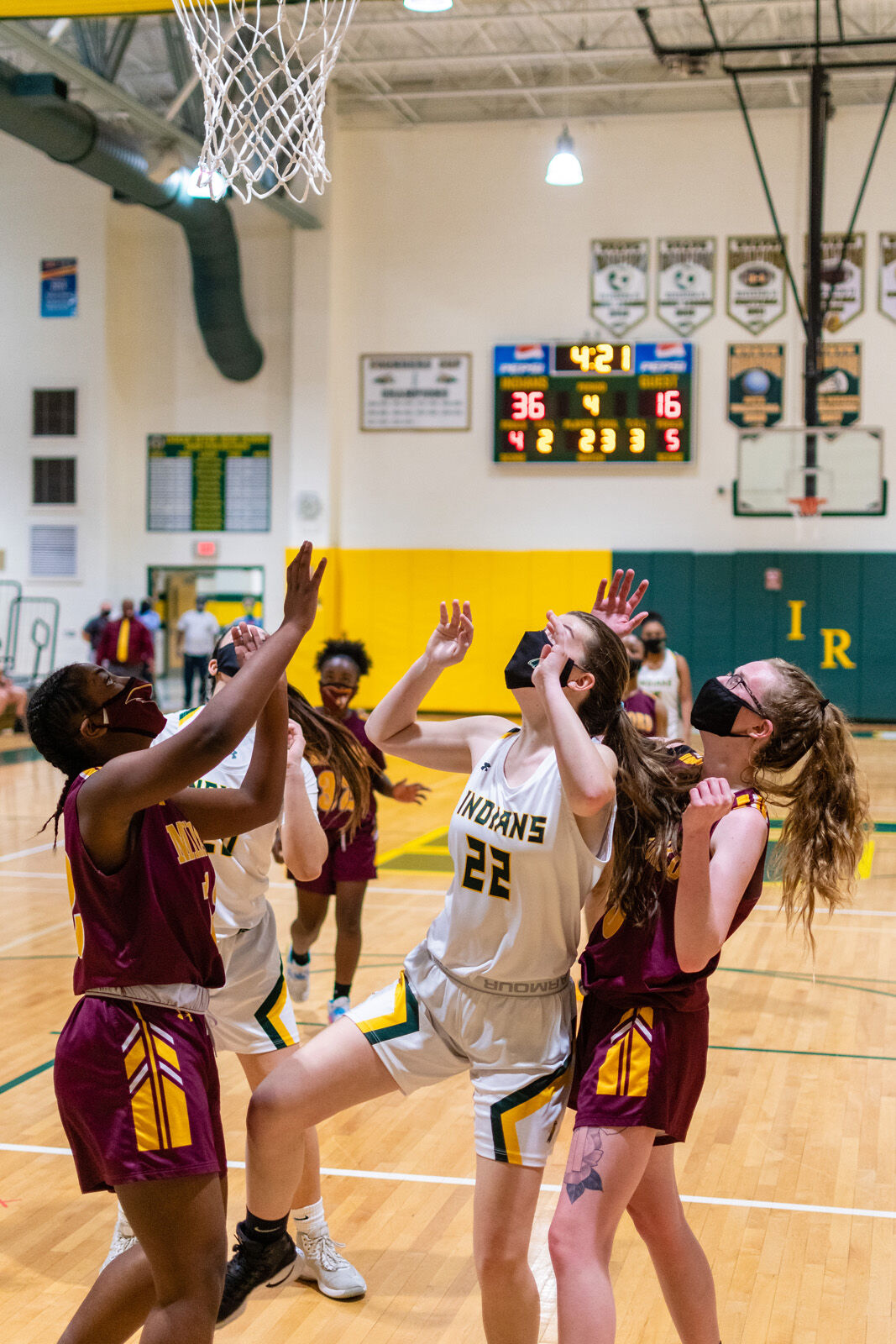 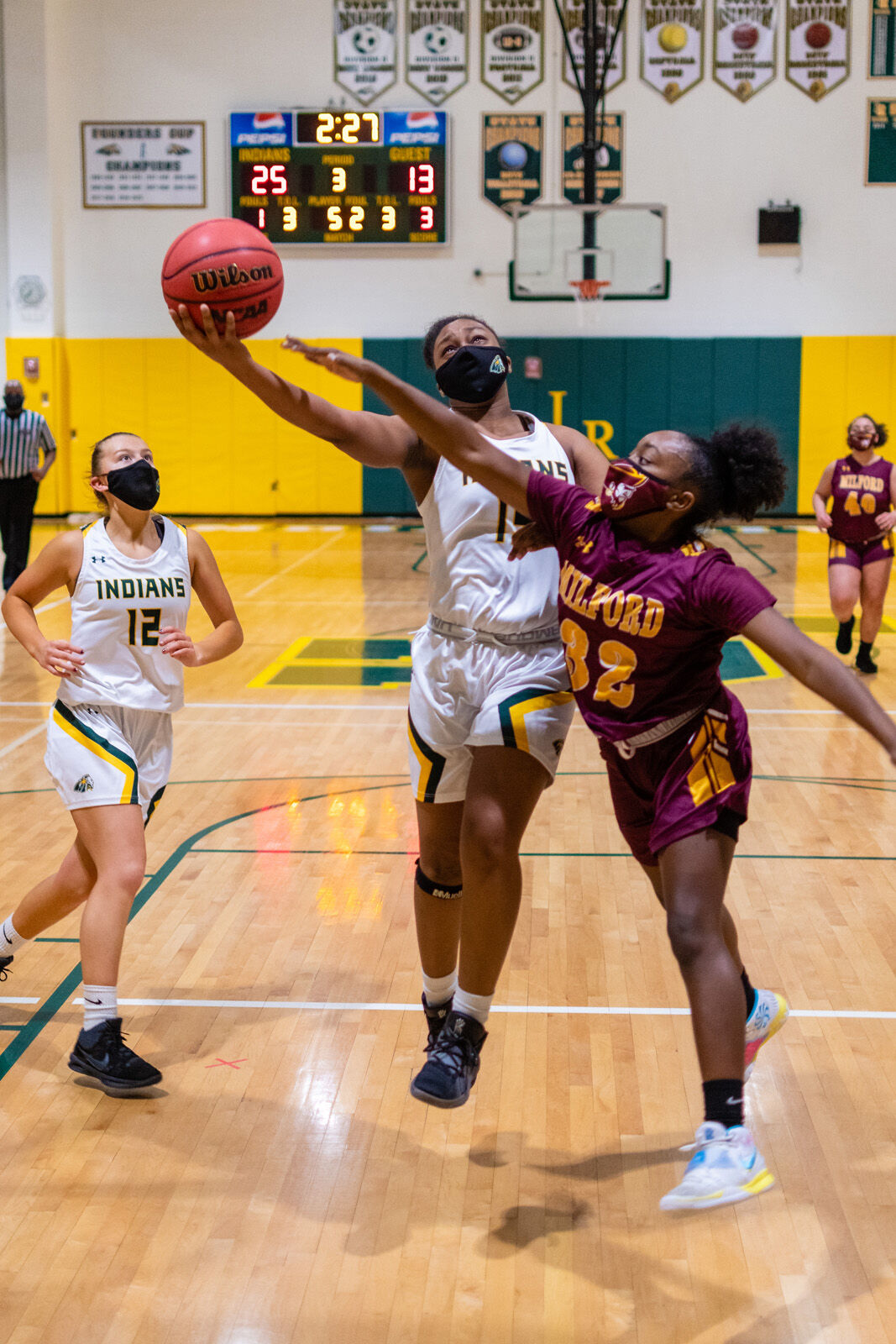 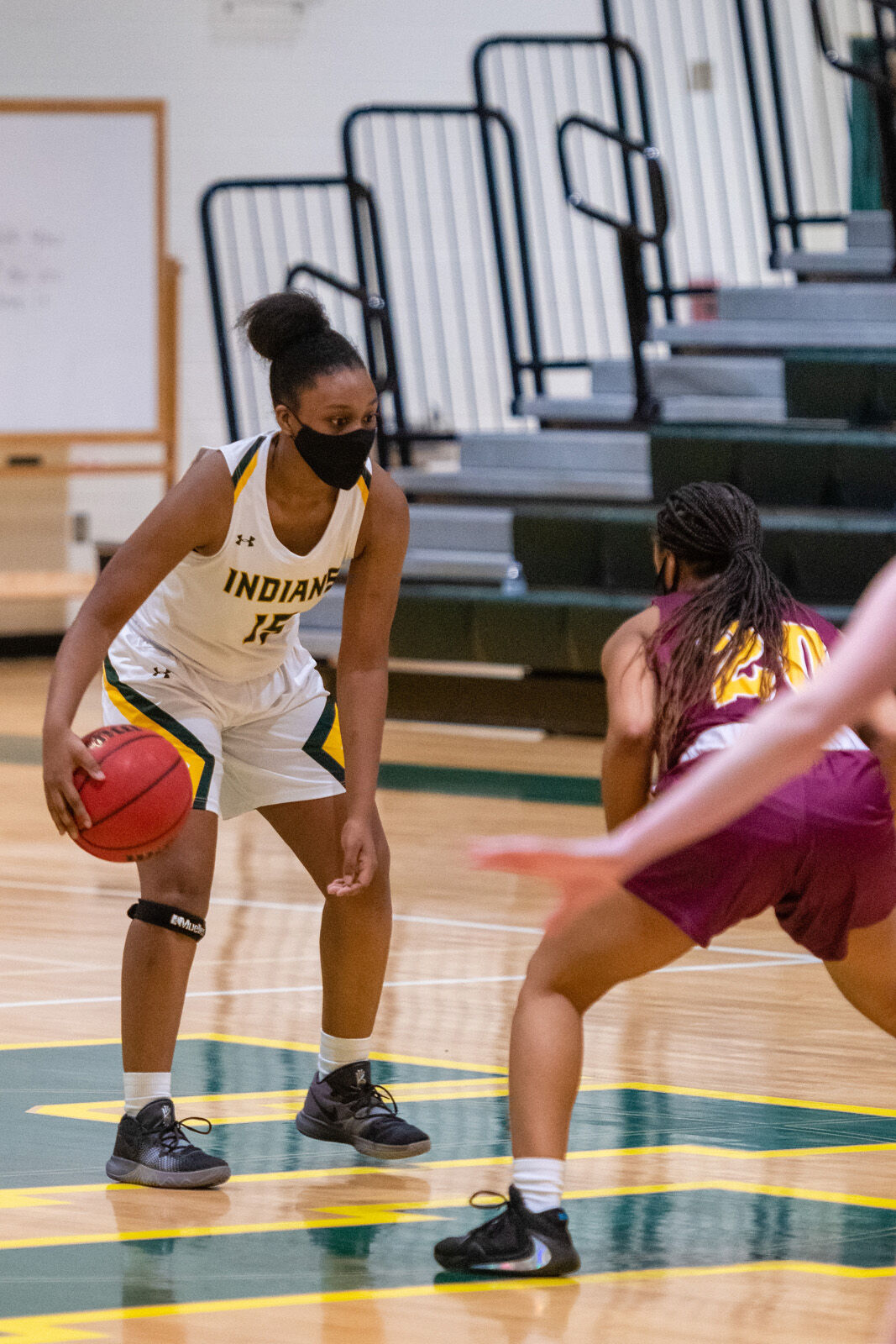 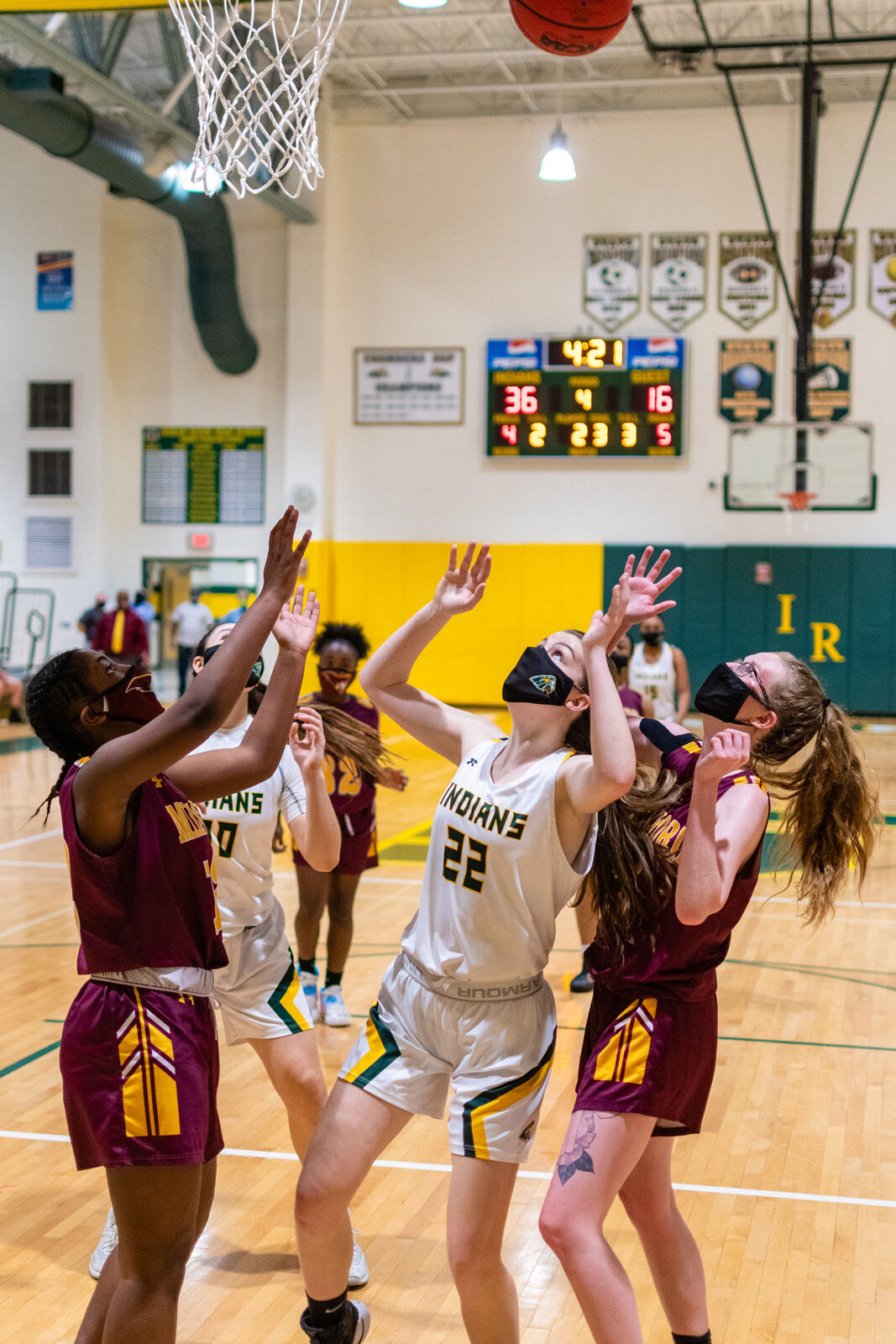 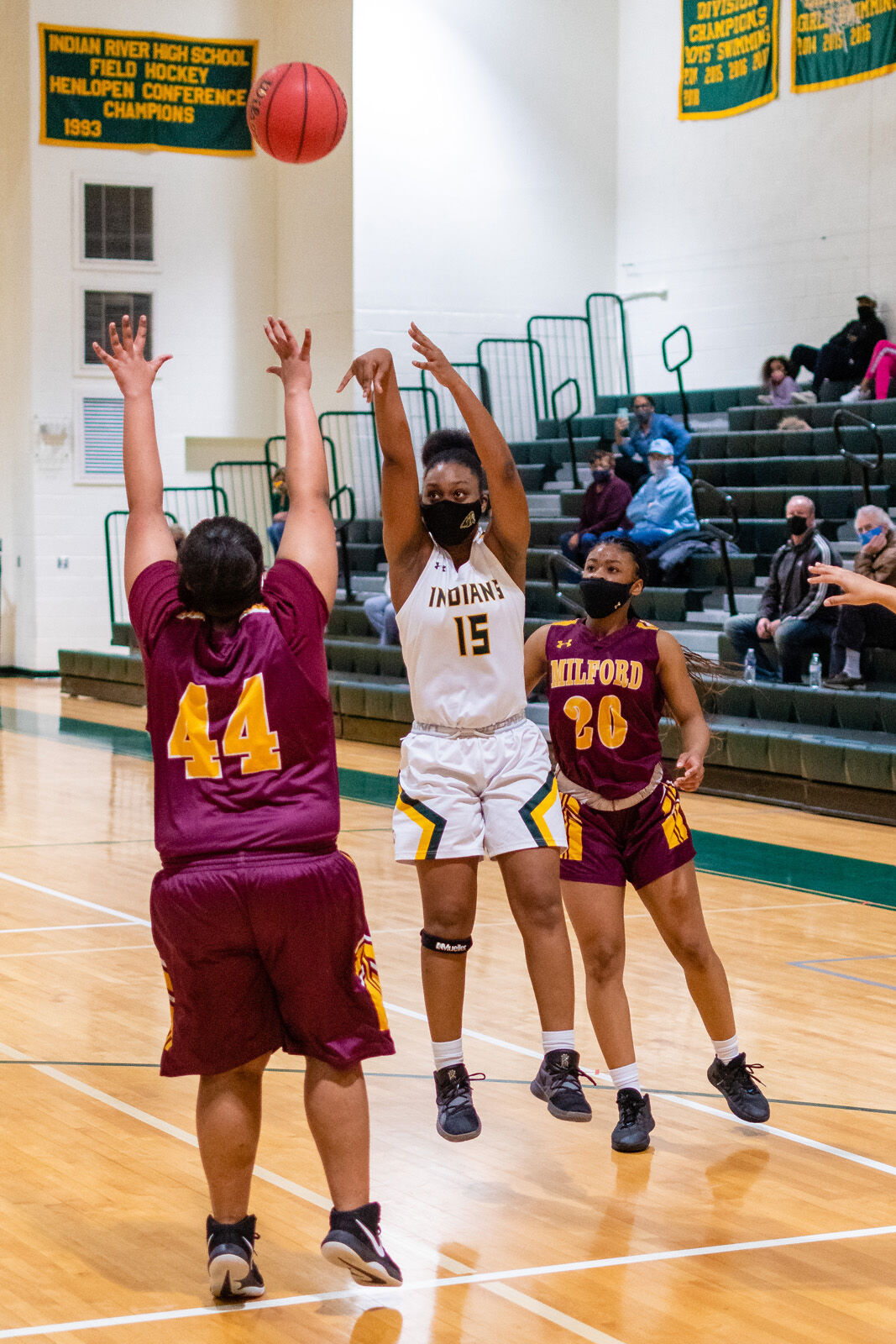 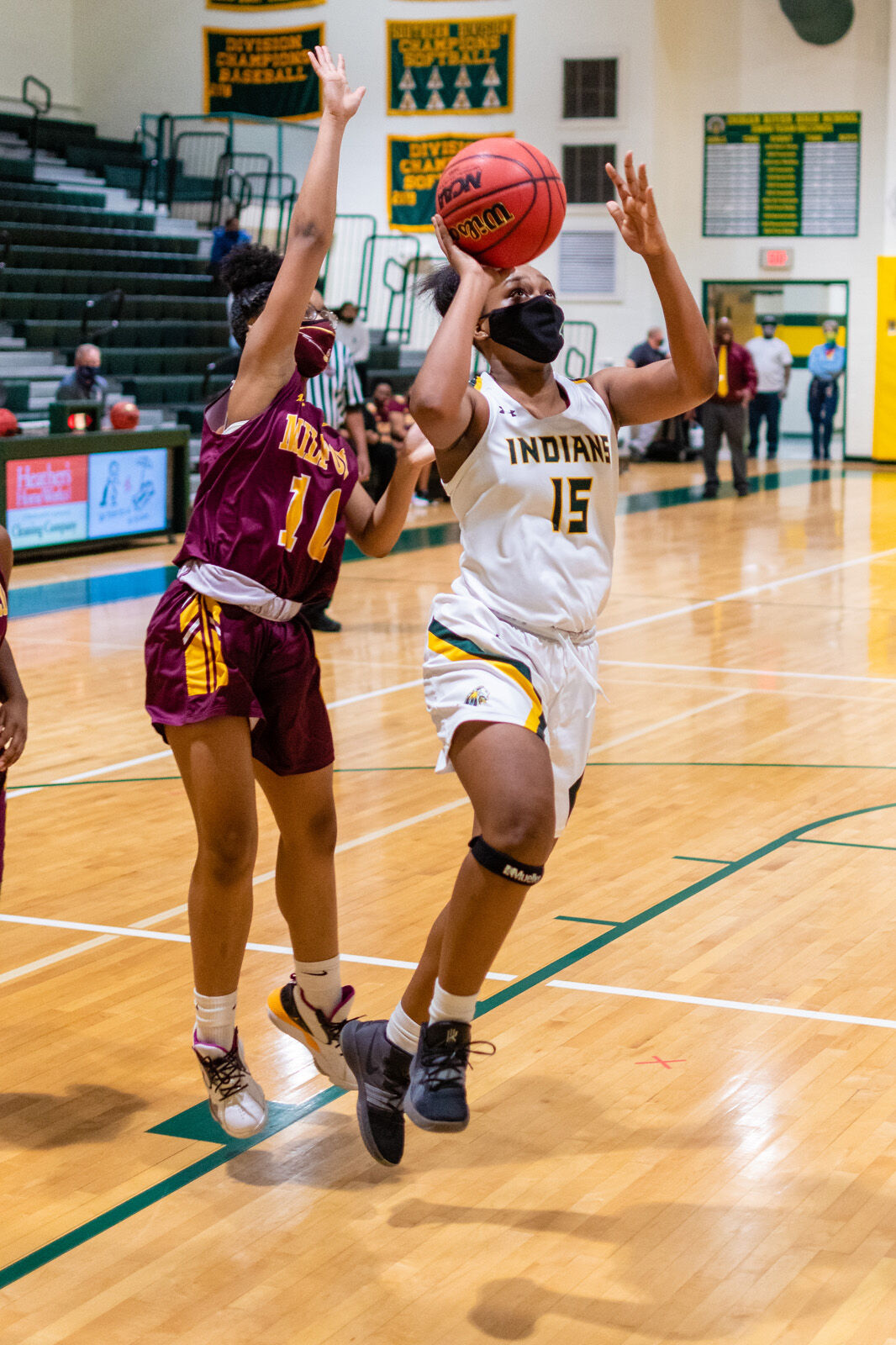 Indian River’s Faith Predeoux, right, makes a pass behind her defender in IR’s 38-21 win over Milford.

Indian River’s Savannah O’Shields eyes up a shot against Laurel on Wednesday, Feb. 24.

The Indian River High School boys’ basketball team has been playing some really good basketball during the second half of the season, finally gelling into the team that they had hoped for at the outset.

Having split their two regular-season meetings, the Indians and Laurel Bulldogs met up in the opening round of the DIAA Boys’ Basketball State Championship playoffs for the rubber match, but there was much more at stake this time around.

Win and stay in. Lose and go home.

The Indians took control from the jump — well, the hand-in, since with COVID there is no jump ball this year. If there were any nerves for any of the players stepping into the state spotlight for the first time in three years for the IR boys’ program, it wasn’t obvious.

Senior Willem Lambertson led the charges with 18 points in the contest, while classmate Gage Spinks also added a double-figure scoring effort with 11. Lambertson knocked down four of IR’s five treys on the night, with Spinks hitting the other.

“I thought we played very nervous,” admitted IR head coach Devin Mann. “That affected some guys more than others. Because of that, we were never really able to get comfortable the way I had hoped for us to. With that being said, I am proud of us for never giving up the lead, and finding a way to match every run they went on.

“Willem did a great job of playing comfortably. If not for his hot shooting, we may have found ourselves in some trouble. Defensively, Brendon [Bradford] set the tone for us with a few steals in the first half, and that helped settle us. We also made timely free-throws to ice the game, which is something we have struggled with this year. I’m proud of them for making it happen, no matter the struggles we had.”

In addition to his stout defense, Bradford added seven points, including his conversion of five of six shots from the foul line. Ja’siah Rounds chipped in with six points and a bunch of rebounds, while Josh Townsend (5 points) and Jamie Burns (2) also got into the scoring action.

The Indians (5-10 overall) held a 26-22 halftime lead and stretched that advantage to 35-24 thanks to a 9-2 spread in the third. Laurel tried hard to get back into the game, with several runs over the final eight minutes, but ran out of gas and time.

Nifere Griffin led all scorers with 21 points in the contest. Eighth-grader Kyle Thompson, who was called up to the varsity midway through the season — and is eligible since Laurel houses both middle- and high-school students in the same building — added 8 points. Junior Omori’Yon Cannon chipped in with 7 of his own, while junior Jamari Holden had 5.

Laurel was playing without any seniors on their varsity roster, which consisted of seven juniors, two sophomores and the eighth-grader.

The Indians — the No. 34 seed in the bracket — were set to travel to No. 2 seed Salesianum (9-3) on Thursday, March 4, (after Coastal Point press time) for a second-round contest. Sallies has lost to No. 1 seed Sanford — who are nationally ranked — once this season, while losing both contests against Tower Hill as well.

Le’Anya Garrison, a junior at IR, led all scorers with 22 points while securing a double-double performance with 13 boards, as well as helping the Indians to a 38-21 win over Milford in the opening round of the DIAA Girls’ Basketball State Championship playoffs on Monday, March 1.

The Indians dominated on the glass, with senior Micayla Meehan clearing 12 rebounds to go along with 4 points and 8 steals, while fellow senior Savannah O’Shields added 10 rebounds and 5 points.

The No. 25-seeded Indians (7-7 overall) were set to travel to No. 8 seed Mt. Pleasant (8-2) on Wednesday night, March 3, (after Coastal Point press time) for their second-round contest. Mt. Pleasant was riding a five-game win streak going into the contest.

Indians travel to take on McKean in first round of states

The Indian River High School Unified basketball team drew the No. 3 seed in the South for the 2021 DIAA Unified State Basketball playoffs and will travel to McKean — the No. 2 seed in the DIAA North — for their first-round game on Monday, March 8.

The Indians are 2-2 on the season, and are led by junior Gabe “Big Shot” Mouynivong, as well as seniors Nariah Showell and Joseph Snyder. The Highlanders are just 2-1 on the season, having defeated Middletown twice, while dropping a game to Appoquinimink.