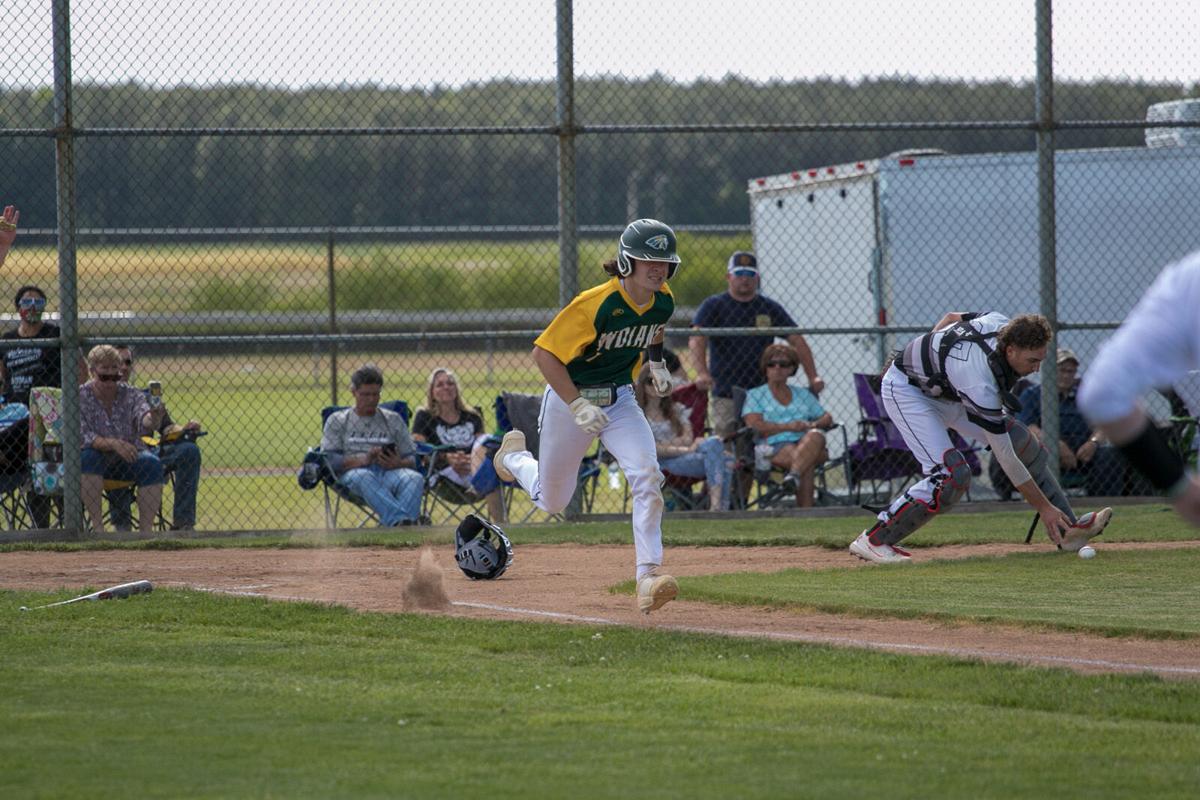 With the ball nearly in the Ravens' catcher's hands, it's an Indians sprint for the base during the May 14 Henlopen Athletic Conference title game. IRHS won the game, and the conference championship. 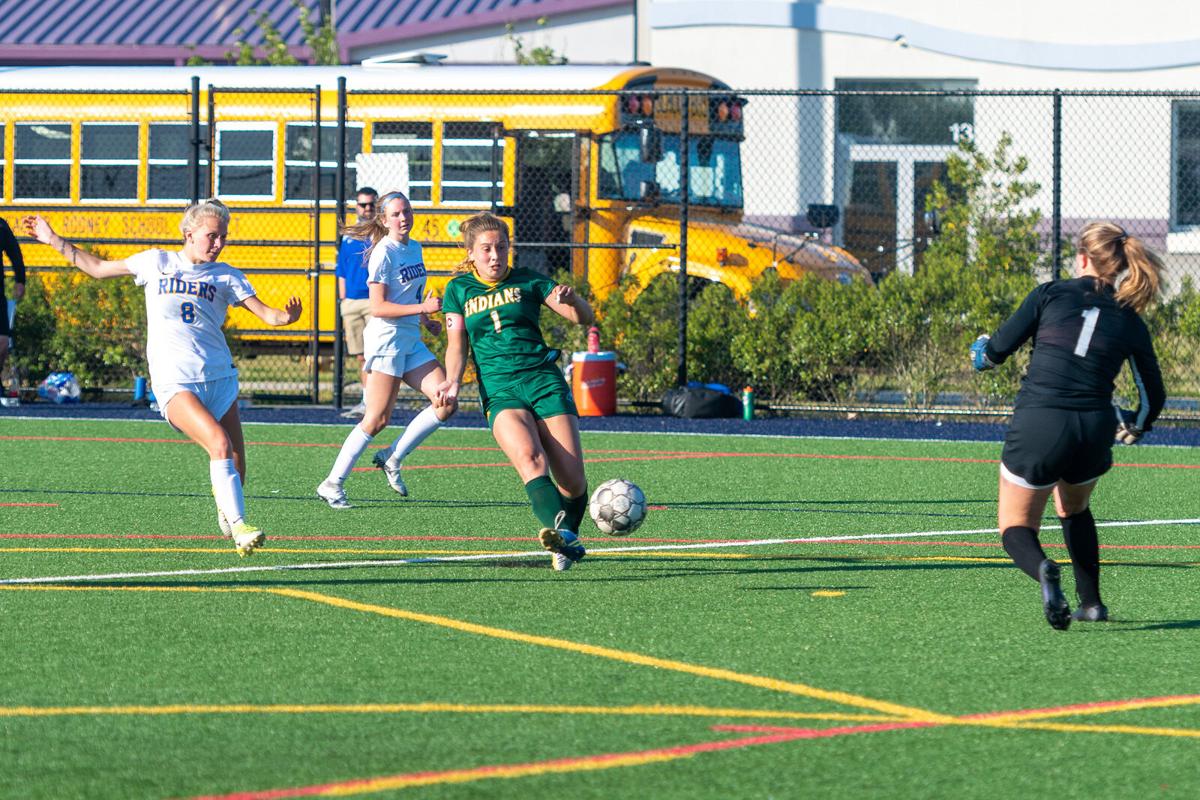 Anastasia Diakos makes the game-winning kick for the Indians in sudden-death overtime against Caesar Rodney on May 14, locking up the Henlopen Athletic Conference Championship and breaking a six-year, 11-game loss streak against the Riders. 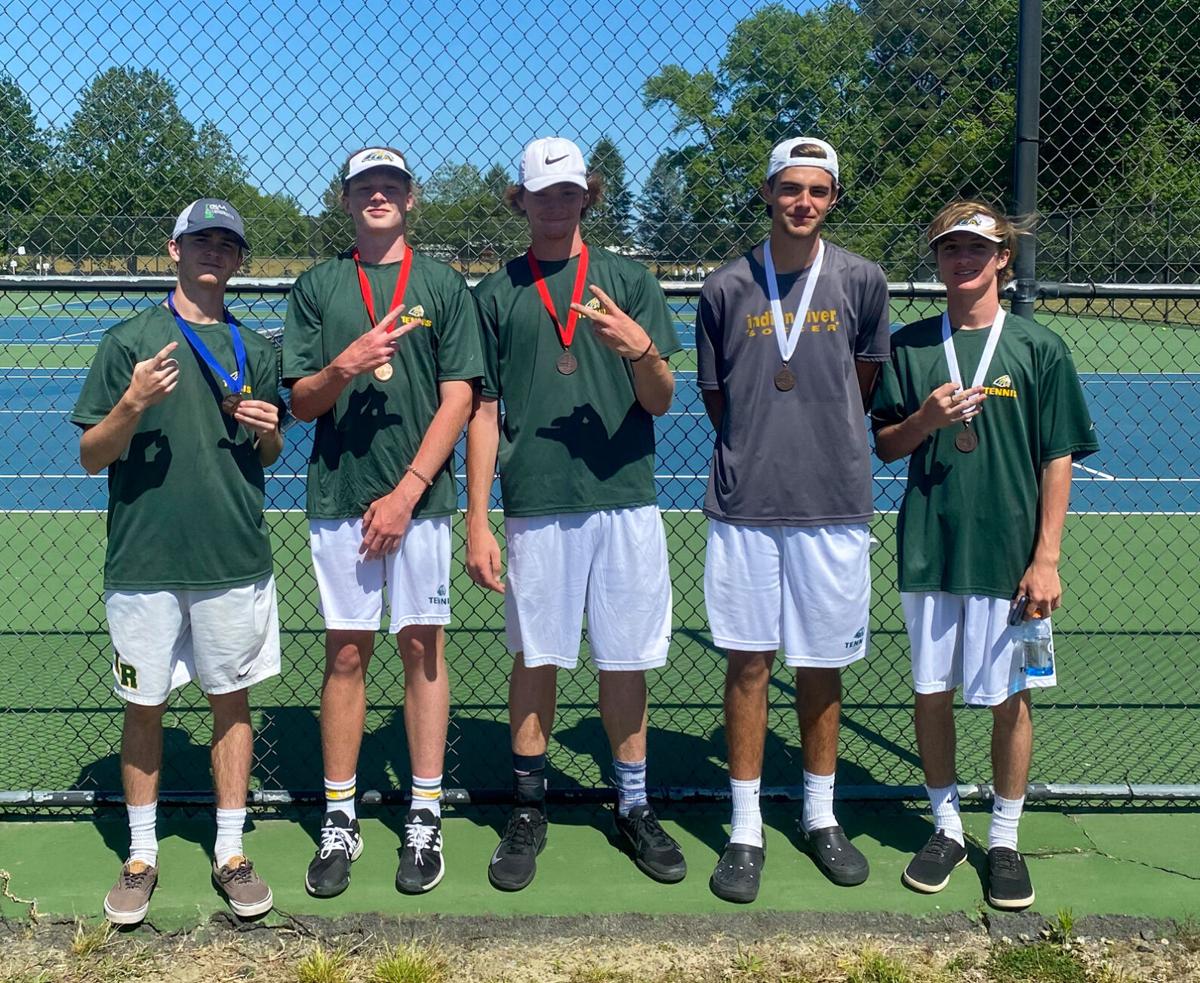 Boys' tennis medalists from the May 15 conference championships include Dane Shuart, Caleb Calbreath and Tristen Hood, and Matt Engel and Gilbert Hoffman.

After a year off from competition thanks to COVID-19, the Indian River High School spring sports teams have certainly made up for lost time with a strong showing this year. In just the past week, the Indians have won several Henlopen Athletic Conference championships.

On Friday, May 14, the Indians’ baseball and girls’ soccer teams both posted 2-1 wins in their respective title games, with the baseball team defeating Sussex Tech on the diamond, while the girls’ soccer team took out Caesar Rodney — again — on the pitch.

For baseball, senior Colin Hudson fired a complete-game one-hitter against the Ravens to lead the Indians to the win. Hudson, a right-hander, allowed just the one unearned run — which came in the first inning — while striking out two. He needed just 77 pitches — 47 for strikes — to accomplish the gem of a performance.

The Indians managed just five hits of their own but were able to score two runs in the second inning to take the 2-1 lead.

It proved to be enough in the end.

Ben Cordrey, Kyle Coffey, Tyler Bowen, Colton Benton and Colby Willey had the hits for IR, all of which were singles. Derek Bellemare and Bowen scored the runs on Willey’s one-out, two-run single in that second inning.

The Indians earned the No. 19 seed and were set to open their run in the DIAA State Baseball Tournament on Thursday, May 20, (after Coastal Point press time), traveling to No. 14 seed Archmere in the first round. Results from the game will be on our Coastal Point Sports News Facebook page when they are available.

The Indians have always had the Caesar Rodney thorn in their side when it comes to the Henlopen Athletic Conference — no matter whether it was a regular-season or conference title game.

Dating back to their last HAC crown in the 2014 season, when they defeated Sussex Tech, 1-0, the Indians had lost 11 straight games to the Riders, which included both regular-season and conference title game meetings.

This time, it looked early on like it was going to be another repeat of past HAC championship game heartbreaks when the Riders got on the board first in the 13th minute to take a 1-0 lead.

The score remained that way until the 78th minute, when IR senior Izzy Bink — a UMBC commit — was awarded a penalty kick that she buried to tie the score at 1-1.

The teams would go into overtime, and that is when the magic happened for the Indians. Senior Sia Diakos — a Wilmington University commit — took a beautiful feed from Hannah Bird and drilled her shot into the back of the net for the game-winner, just four minutes into the extra time.

The proverbial CR monkey was off the Indians’ backs, as they would claim the 2021 HAC conference crown.

The Indians actually dominated play for much of the game, holding a 20-7 edge in shots. CR picked up six corner-kick chances to IR’s five. Freshman goalie Alex Davidson made five saves for the Indians for the win.

IR earned the No. 4 seed in the upcoming DIAA Division II Girls’ Soccer State Playoffs and will begin their quest for the school’s first state title on Saturday, May 22, when they host the winner of No. 5 Ursuline or No. 12 Sanford in the quarterfinal round.

The Indians are now 13-2 overall and will need just three more wins to bring home even more hardware for this season. Results for Saturday’s game will be available on the Coastal Point Sports News Facebook page when they are available.

The Indians had a strong showing at the Henlopen Athletic Conference Track & Field Championship meet last Thursday and Friday, May 13-14, at Lake Forest High School. All told, IR came home with Brynn Crandell and Hayden Hall each winning events.

Crandell, a freshman, won the conference title in the 1,600 and 3,200 distance running events, continuing the success she had in her first season on the cross-country circuit. She has established herself as one of the elite runners in the state this year.

Hall, a sophomore, leaped to a first-place finish in the high jump to claim his own conference championship. He would add a third place to his credit in the pole vault.

Senior Lucas Weber was second in the discus event, and sophomore Cole Brickman was third in the 110 hurdles.

G.W. Carver teacher keeps her faith in the students