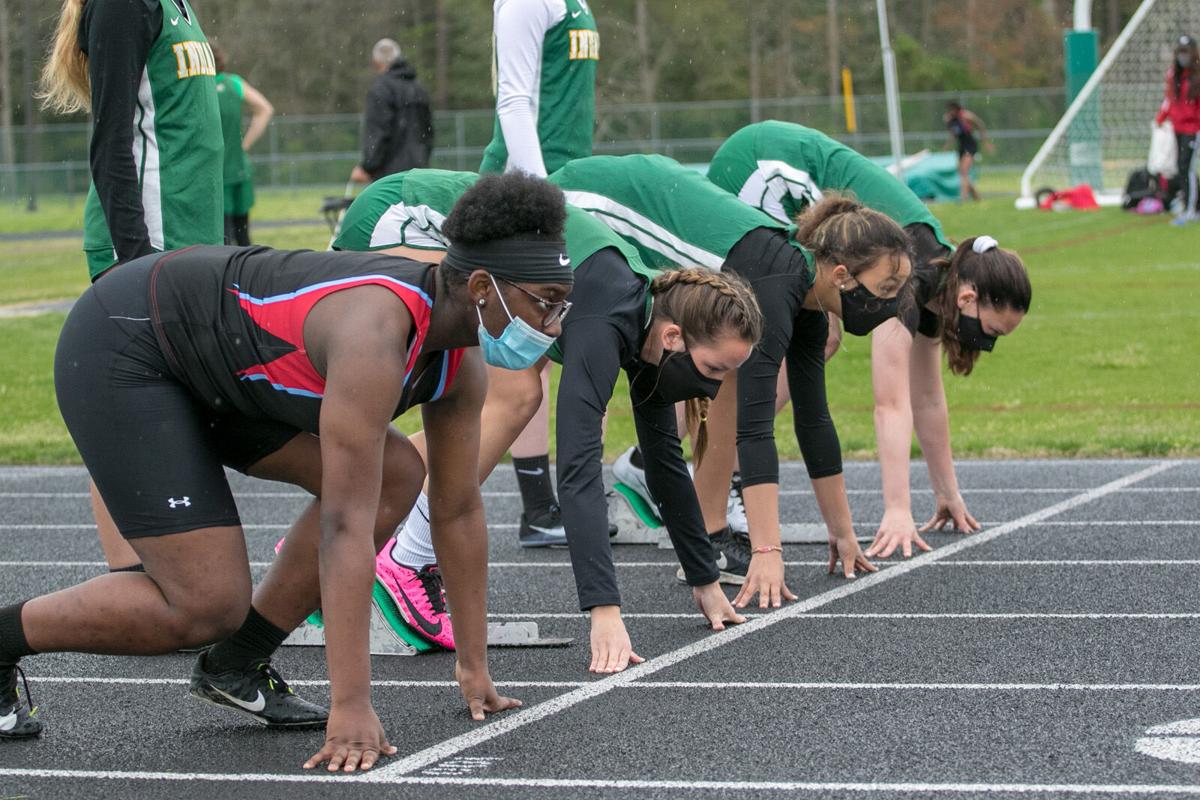 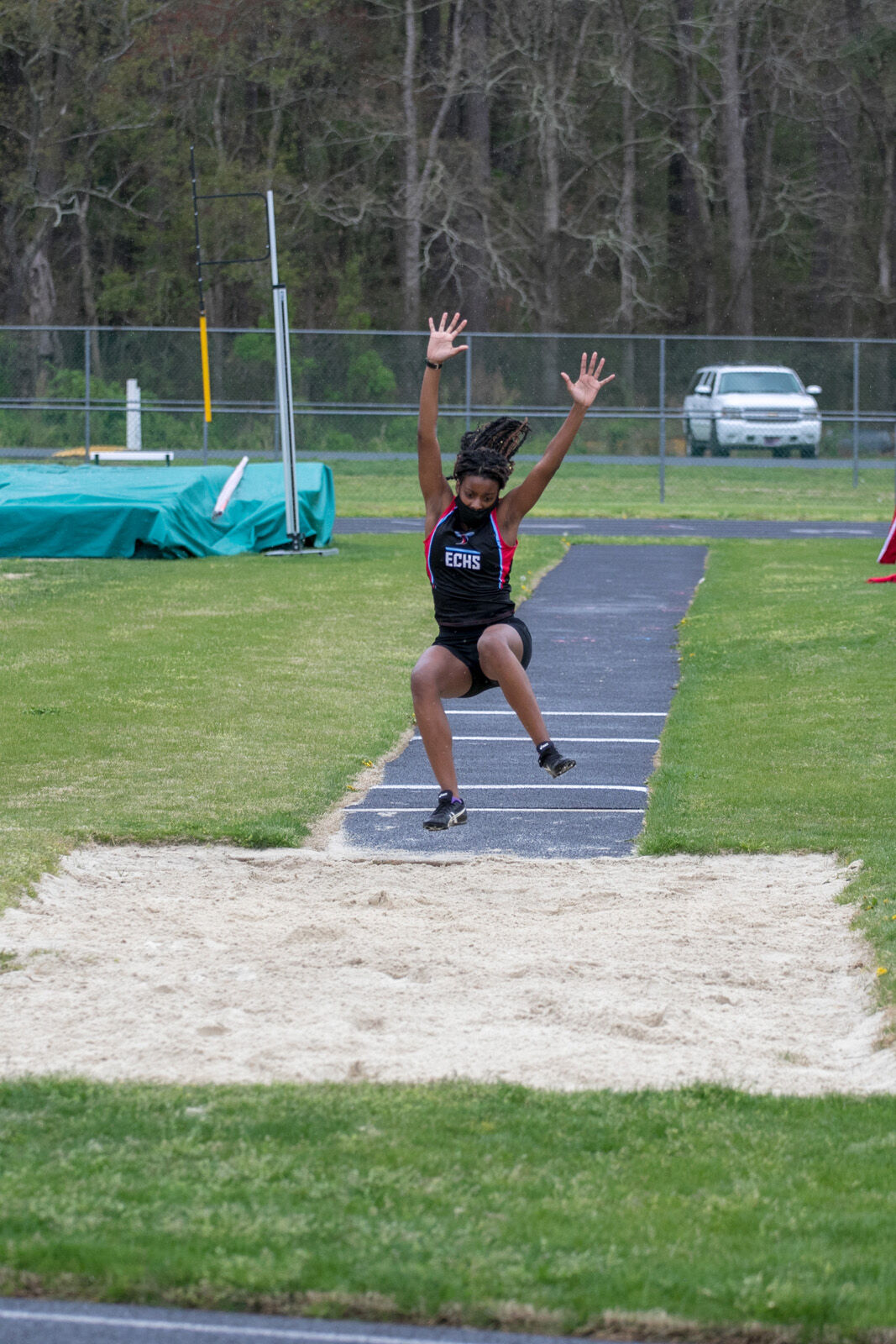 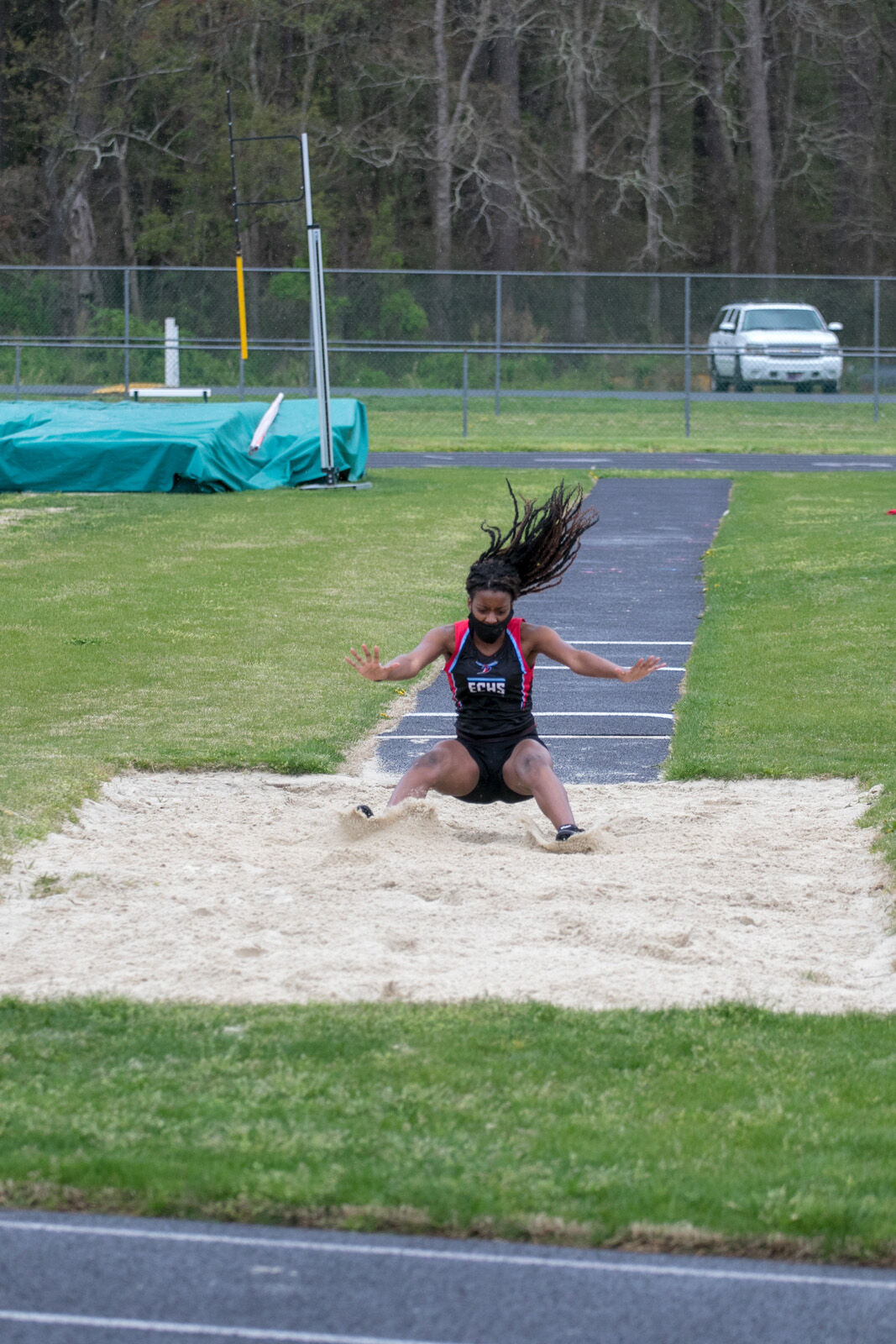 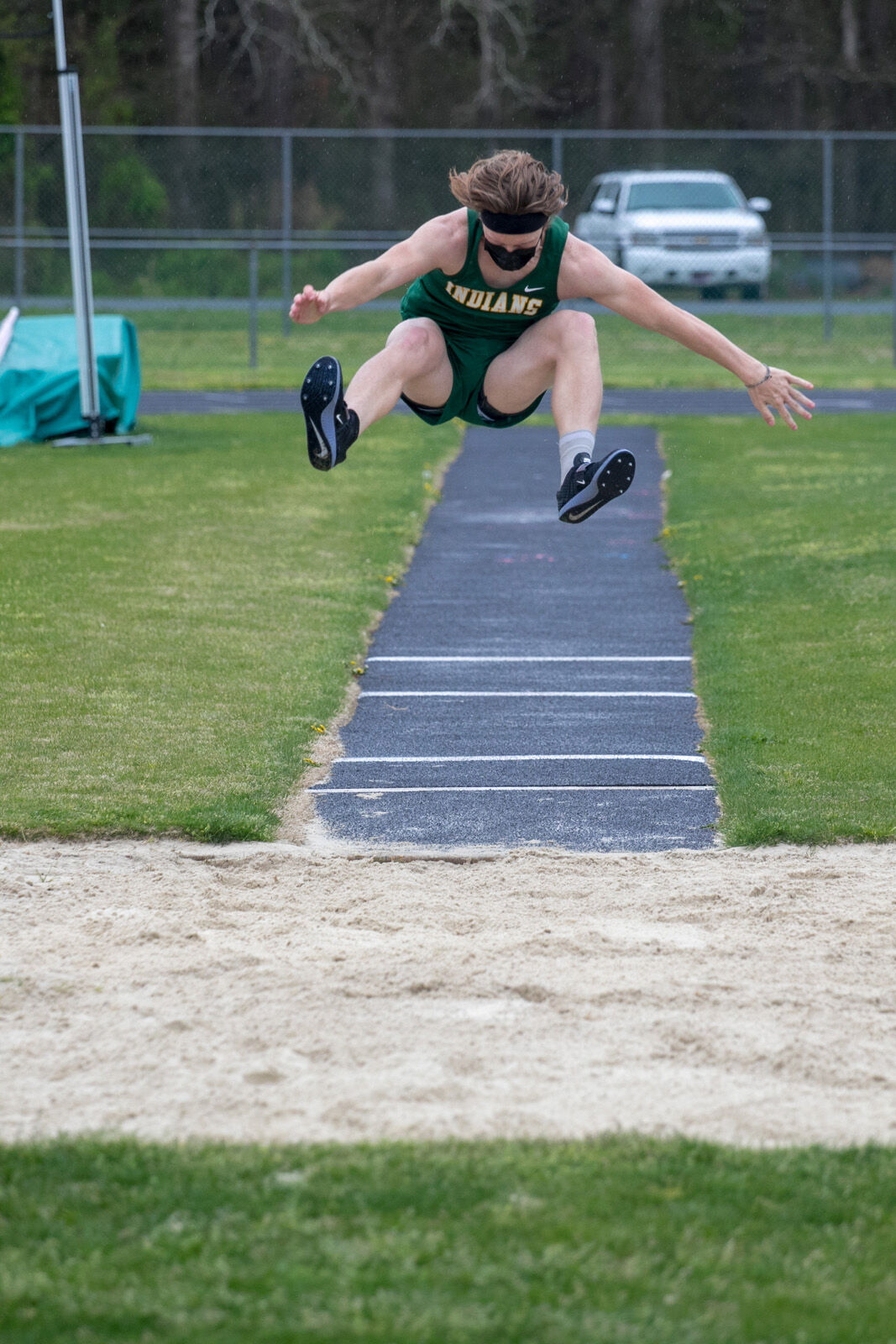 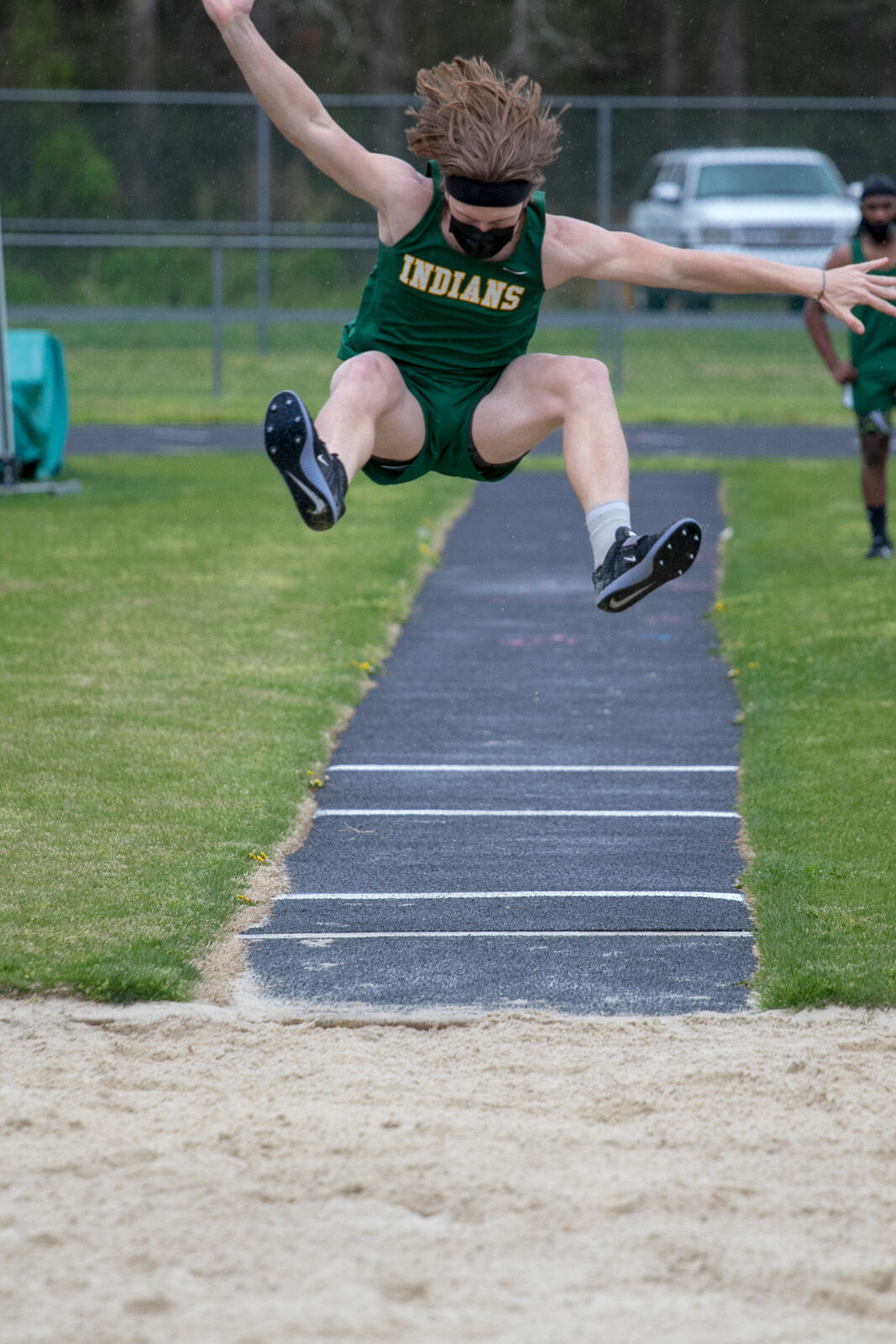 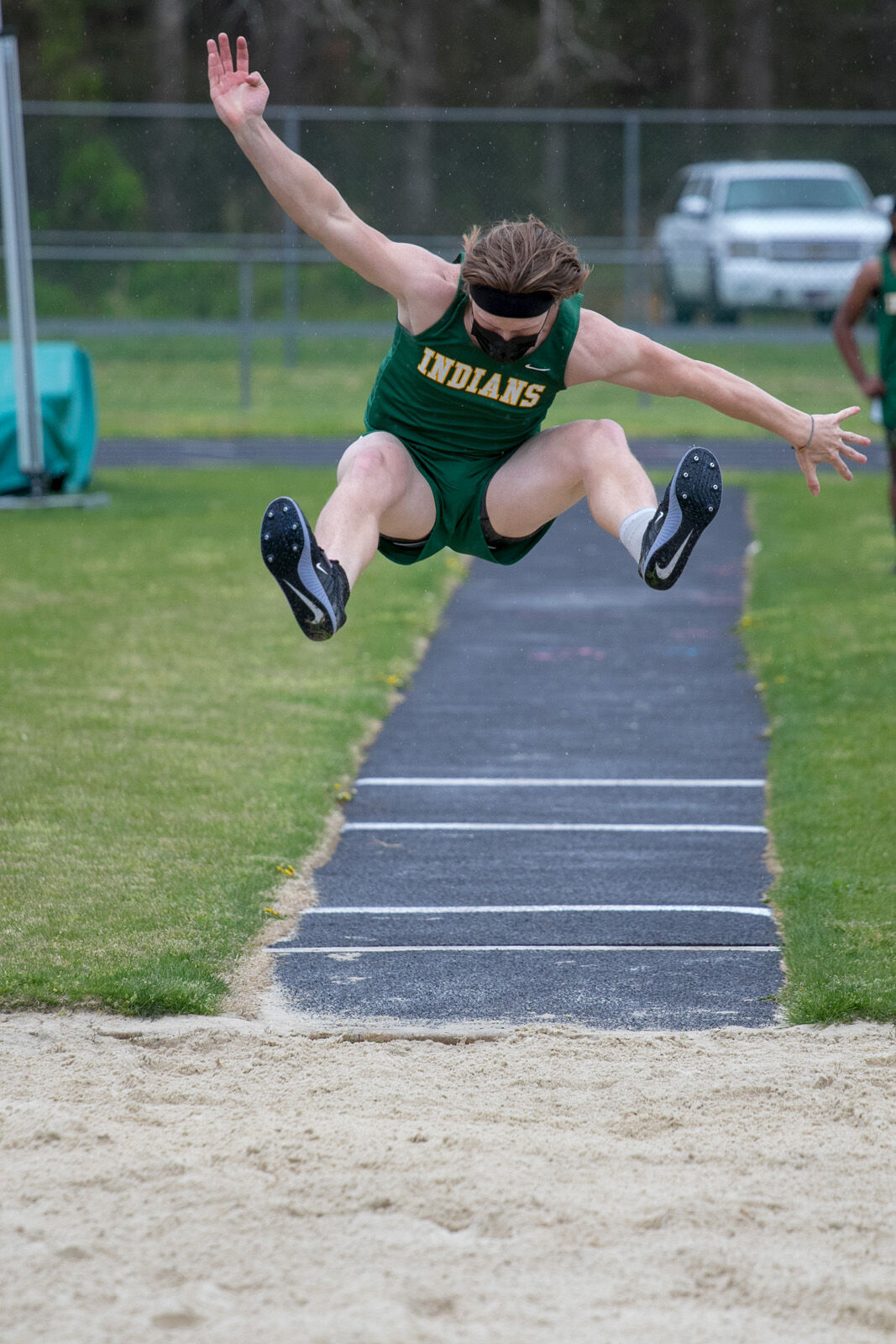 Hayden Hall catches some air during a meet. 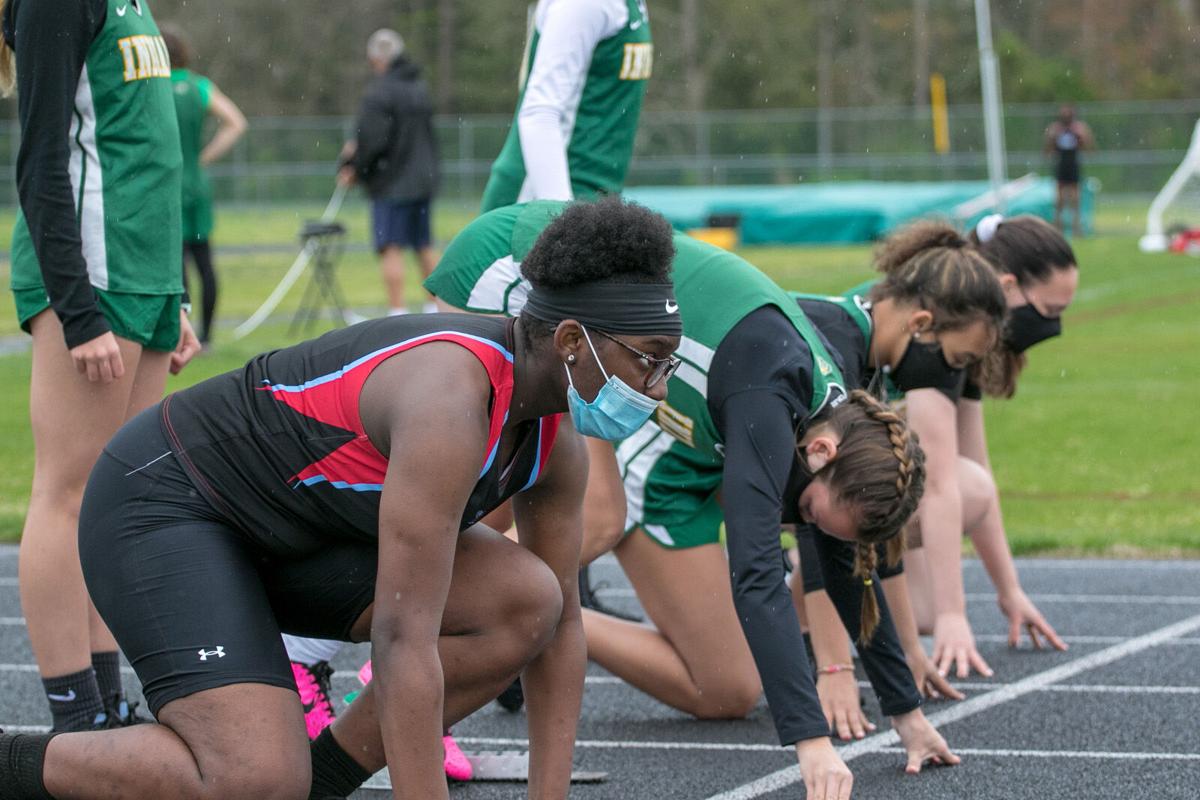 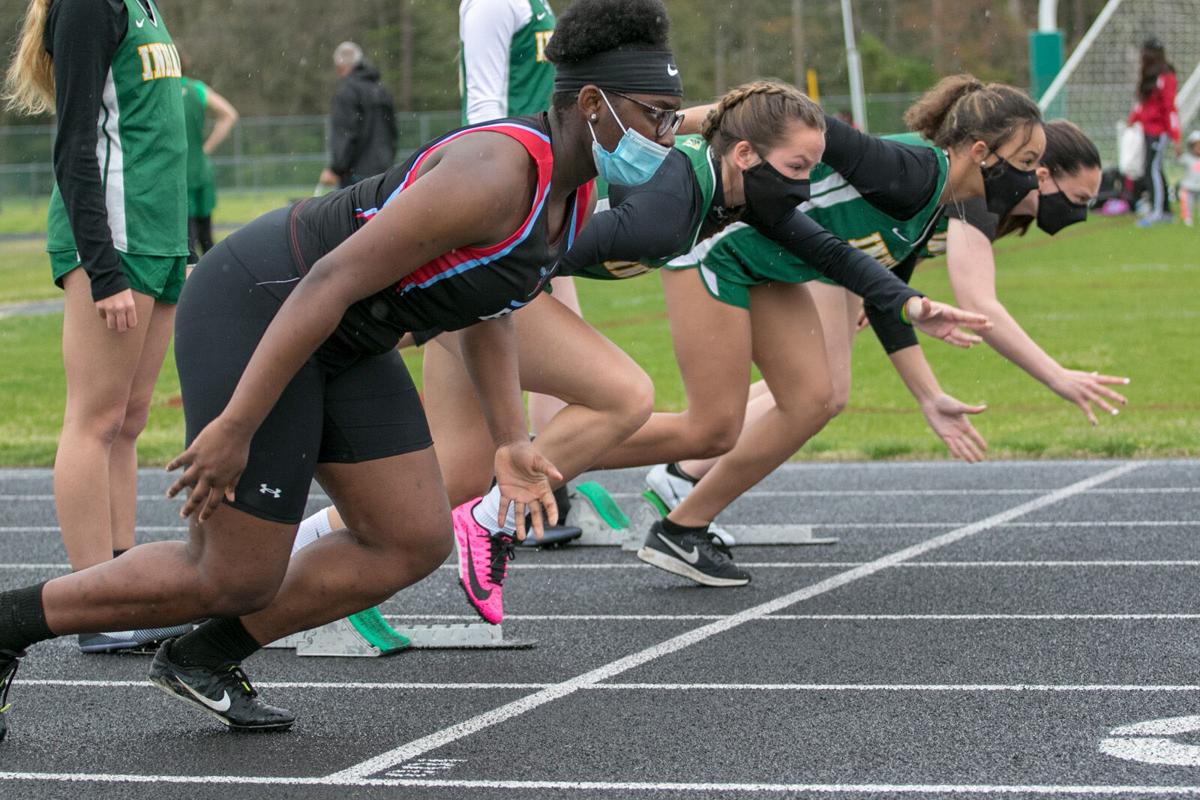 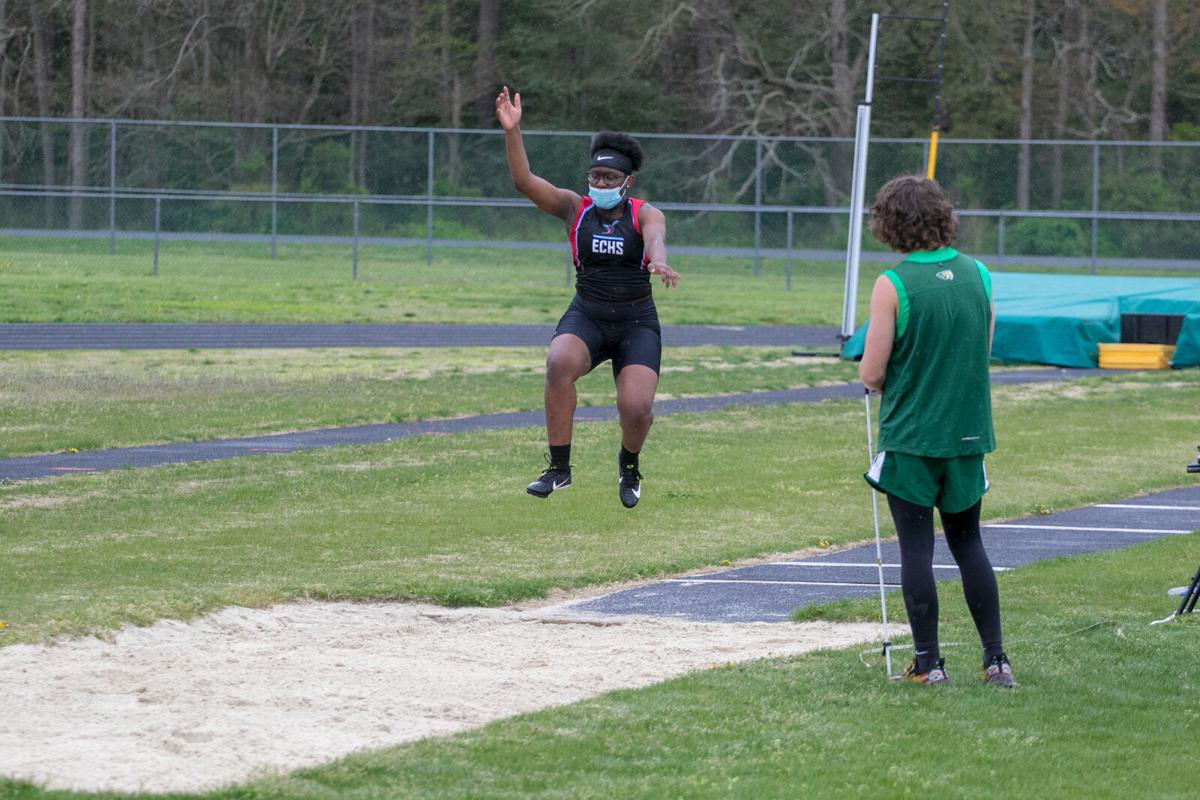 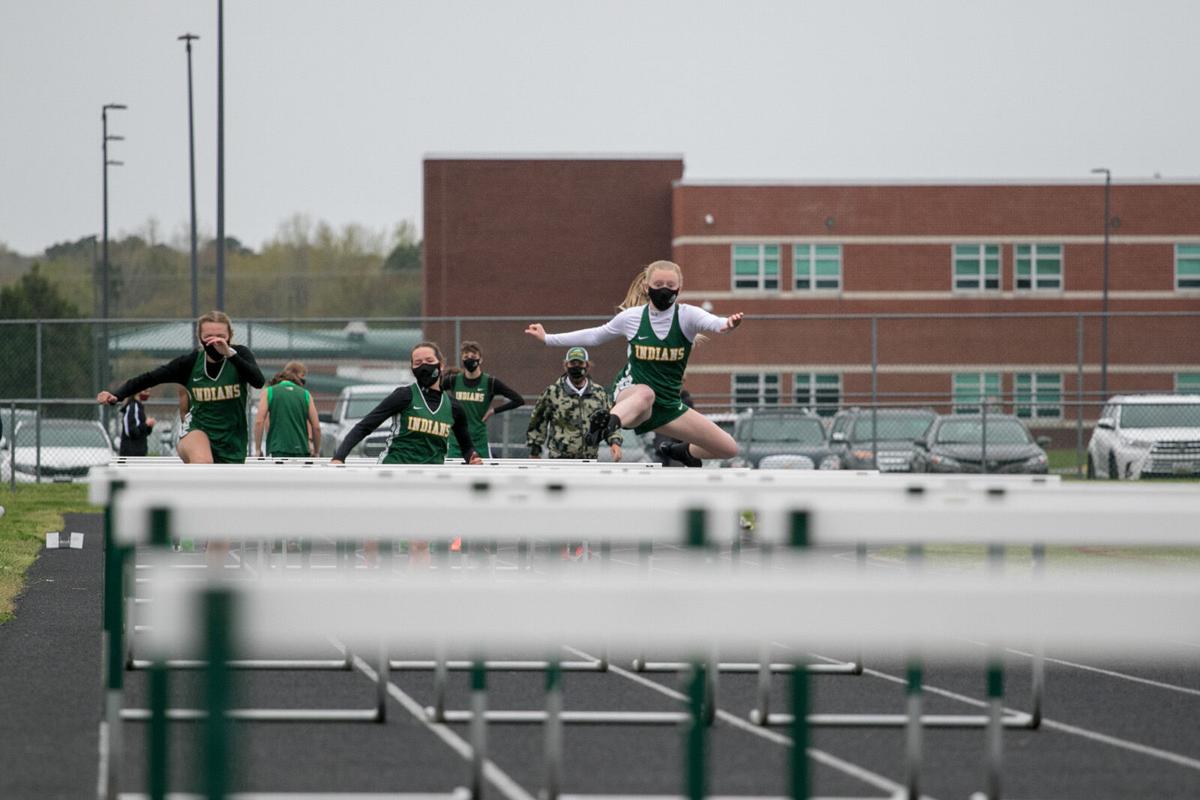 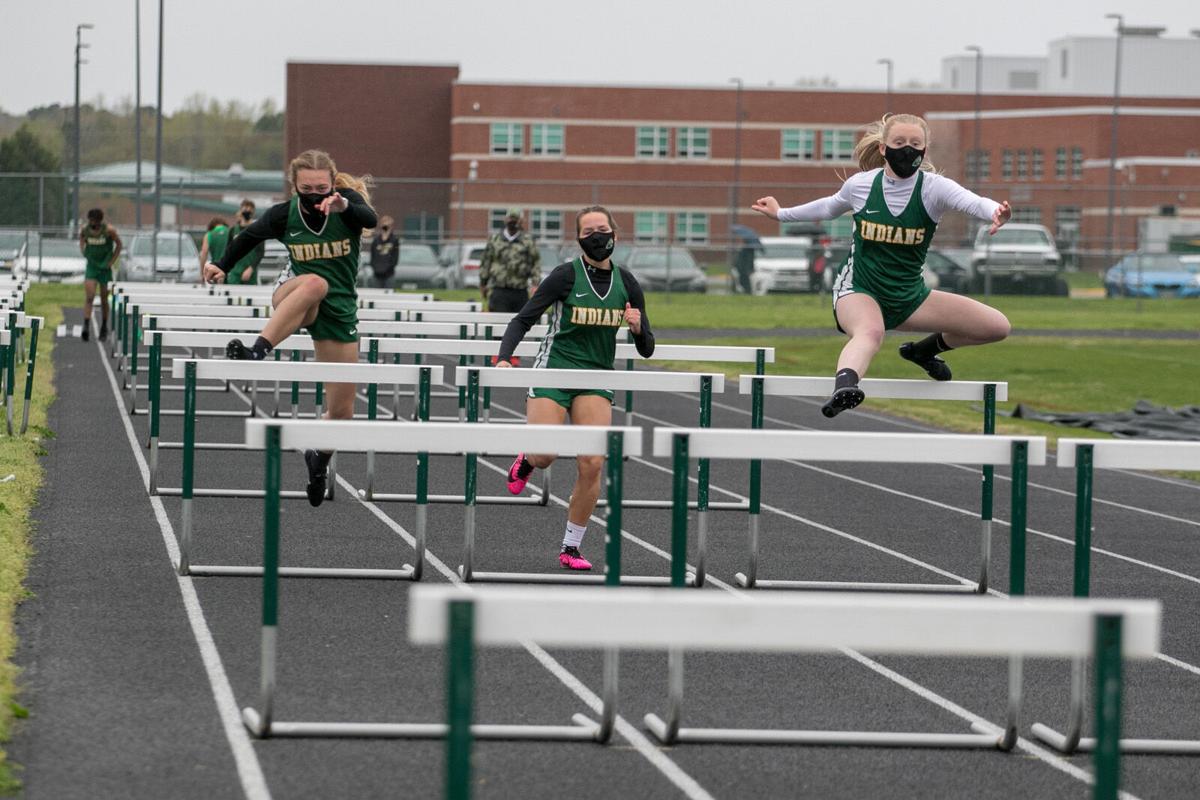 Sydney Deery, Alexis Pszczola and Grace Robinson make a run for it in the 100m hurdles. 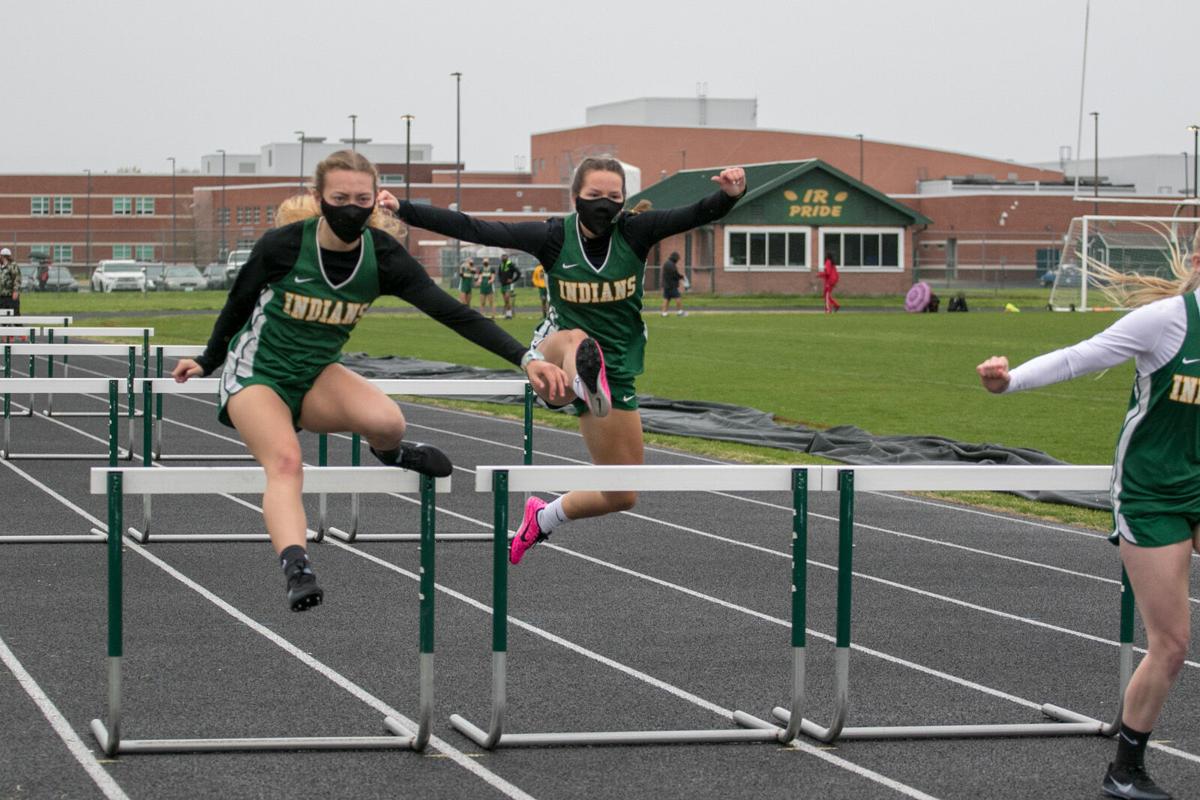 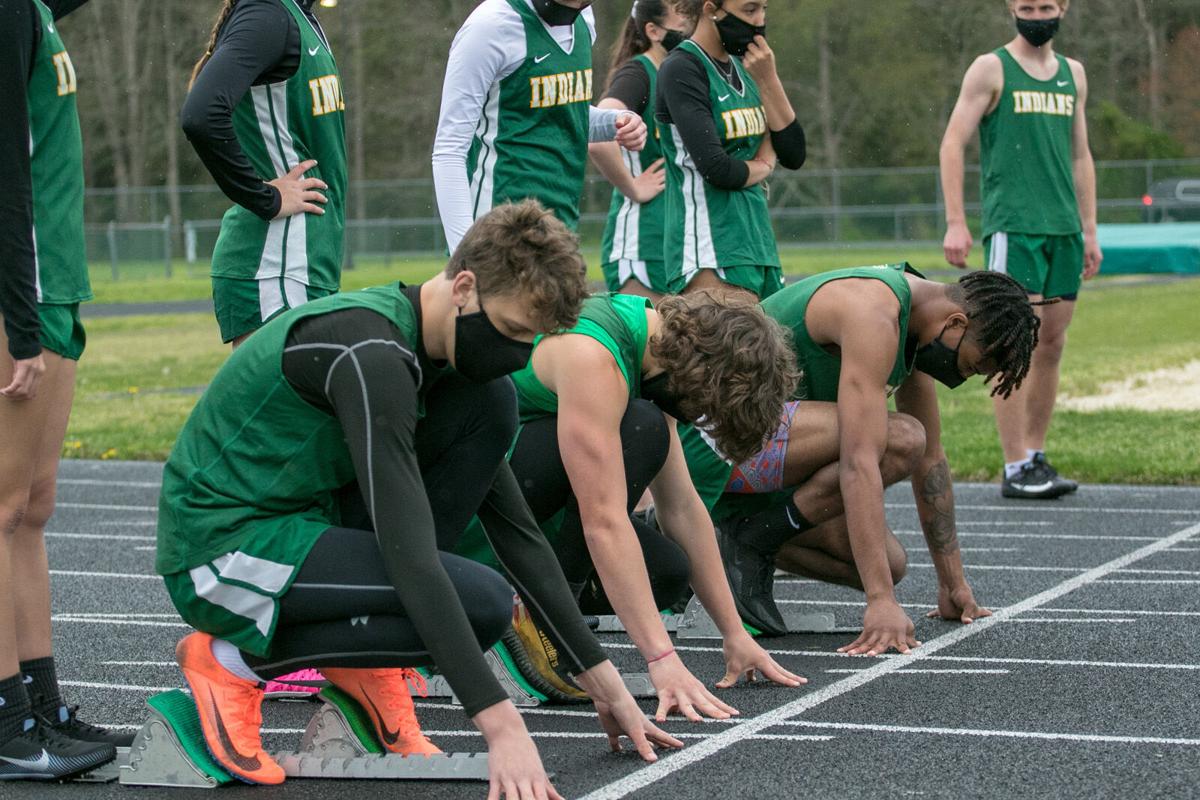 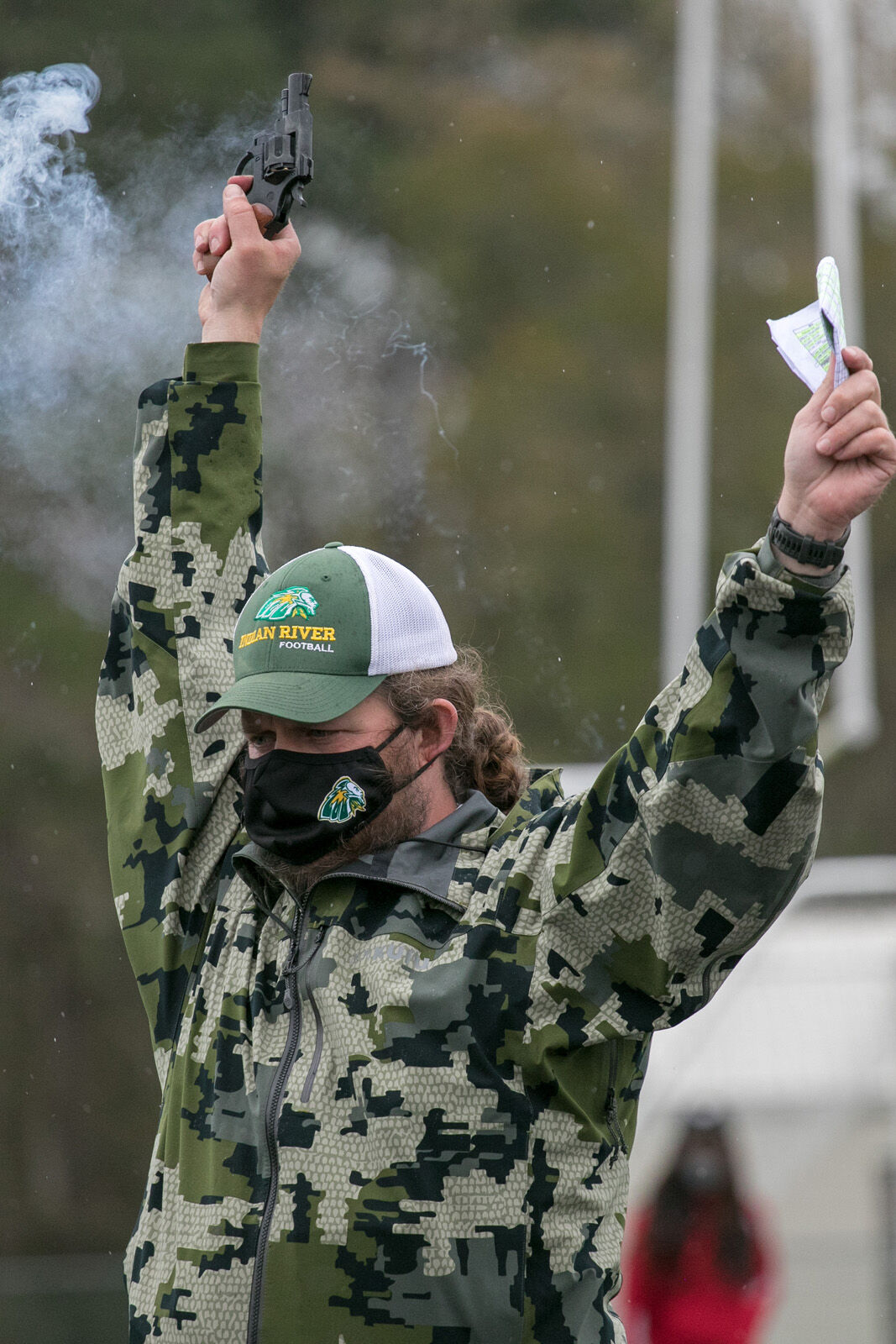 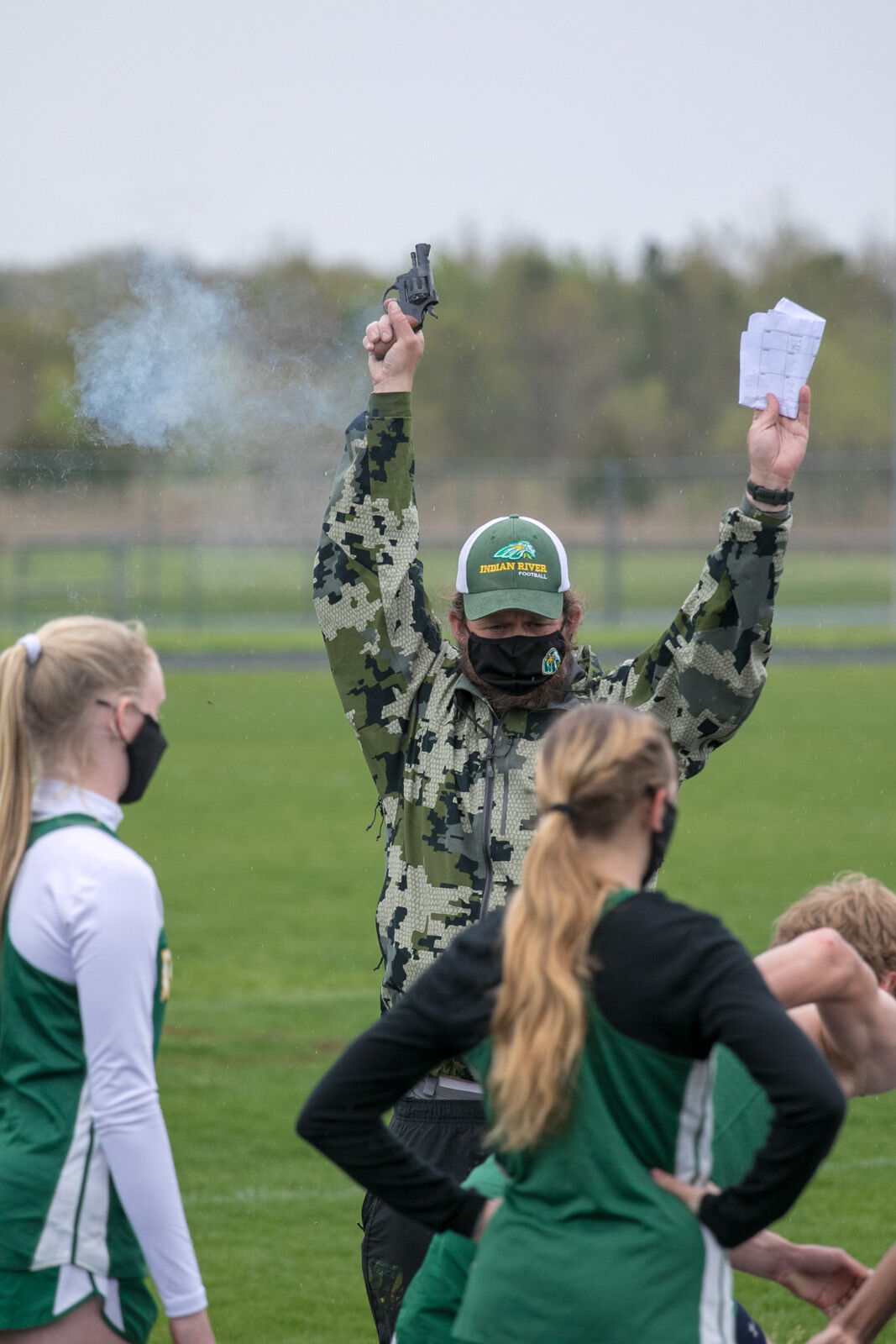 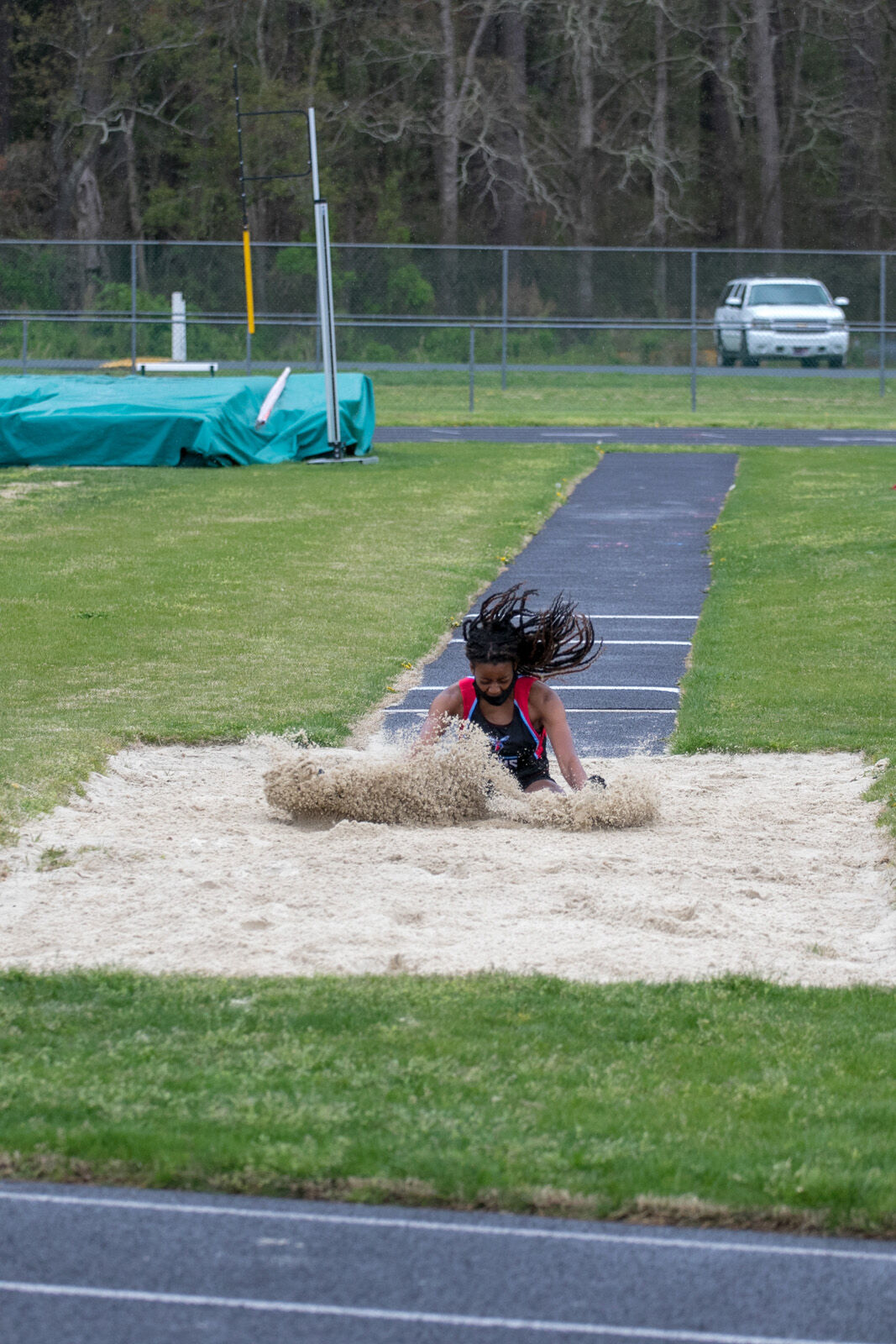 The Indian River High School boys’ track-and-field team won every event on its way to a season-opening 125-4 win over Early College High School on Wednesday, April 14. In fact, the Indians also placed second in every event but one, and third in all but one as well.

Senior Declan Burke was a three-time winner, taking first in the 800, 1,600 and 3,200. Sophomore Cole Brickman and freshman Caleb Rogers were both double winners for the Indians. Brickman winning the 110 hurdles and 300 hurdles, while Rogers won the 100 and 200. Cole Donnelly also picked up a first place in the 400 for IR.

In the field, sophomore Hayden Hall was a four-time winner, taking the top spot in the triple jump, long jump, high jump and pole vault. Senior Lucas Weber was first in the discus, while junior Dalton Hall was tops in the shotput.

For the girls, it was a relatively easy 69-22 victorious decision for the Indians, as they were able to win all but three events against the Hornets.

Freshman Brynn Crandell was a triple winner, taking all of the distance running events — 800, 1,600 and 3,200 — to score big points for IR. Classmate Grace Robinson also had an impressive high school debut with three wins of her own, in the 110 hurdles, triple jump and pole vault events.

Other winners for the Indians included senior Morgan McGee, coming over from the lacrosse field to take first place in the 400, sophomore Sydney Deery winning the 300 hurdles, and freshman Lily Johnson tossing the discus to a first-place distance.

Both track-and-field teams competed in a quad meet at Woodbridge against the Blue Raiders, Sussex Academy and Laurel on Monday, April 19. However, inclement weather forced the completion of the meet to take place on Tuesday, April 20, and final results were not available in time for the Coastal Point deadline this week. Results from the meet will be available on the Coastal Point Sports News Facebook page when they are known.

Seven first-half goals proved to be more than enough for the Indians as they cruised to a 9-2 win over Seaford in a Henlopen Athletic Conference South Division contest on Thursday, April 15.

Bella Scurci, Sia Diakos and Izzy Binko each scored twice in the first half for the Indians, with Chloe Beam adding the other goal. Scurci also had a pair of assists, with Carly Topper getting credit for two helpers. Binko and Hannah Bird had the others.

In the second half, Diakos picked up both assists on goals by Lilah Hanley and Riley Hurd.

The Indians out-shot Seaford 15-5, and held a 2-1 edge in corner-kick chances. Freshman Alex Davidson made three saves, while sophomore Lizett Cordoba-Cordova made one for IR.

The Indian River High School girls’ lacrosse team picked up their second win in less than a week, over Milford on Monday, April 19, as they defeated the Bucs, 11-7.

Senior Drew Szlasa scored a team-high three goals for the Indians, while classmates Morgan McGee and Kylie Kirschner each added a pair of goals and an assist. Victoria Von Ziethen — another senior — also scored a goal for the winners, as did freshman Kylie Harris. Junior Emma Ruley scored twice as well.

The Indians outscored Milford 5-3 in the first half and 6-4 in the second for the final scoring margin. IR used both goalies in this one, with senior Allyson Clark recording seven saves, while junior Caylee Schmidt was credited with nine.

Milford actually out-shot the Indians 21-17, but IR took advantage of their scoring chances for the win.

The victory evened the Indians’ record at 3-3 on the season. They were set to host Caravel Academy on Wednesday, April 21, (after Coastal Point press time), before traveling up to Dover on Friday, April 23. Results from the games will be available on the Coastal Point Sports News Facebook page.

The Indians were led by Ryan Furman and Max Forrey’s two goals apiece, with Evan Peterson, Ben Spencer and Reece Stone each adding one. Spencer also had a pair of assists, while Forrey and Stone were each credited with an assist.

The loss was the second of the season to the Seahawks for IR, whose record following the contest was sitting at 2-3. They were scheduled to host Woodbridge on Wednesday, April 21, (after Coastal Point press time) and Sussex Tech on Friday, April 23, in key HAC matchups with potential state playoffs implications. Results from the games will be available on the Coastal Point Sports News Facebook page.

IR picks up fourth win on the season

The Indian River High School boys’ volleyball team continued its winning ways this week, having picked up win No. 4 on the season thanks to a 3-1 decision over Cape Henlopen on Tuesday, April 20. The Indians won the match with set scores of 25-23, 25-10, 19-25 and 25-14. No other information or stats were available as of press time from what was a home match for the Vikings.

The Indians will travel north to John Dickinson School on Friday, April 23, for a non-conference tilt against the Rams. Results from the match will be available on the Coastal Point Sports News Facebook page once they are available.