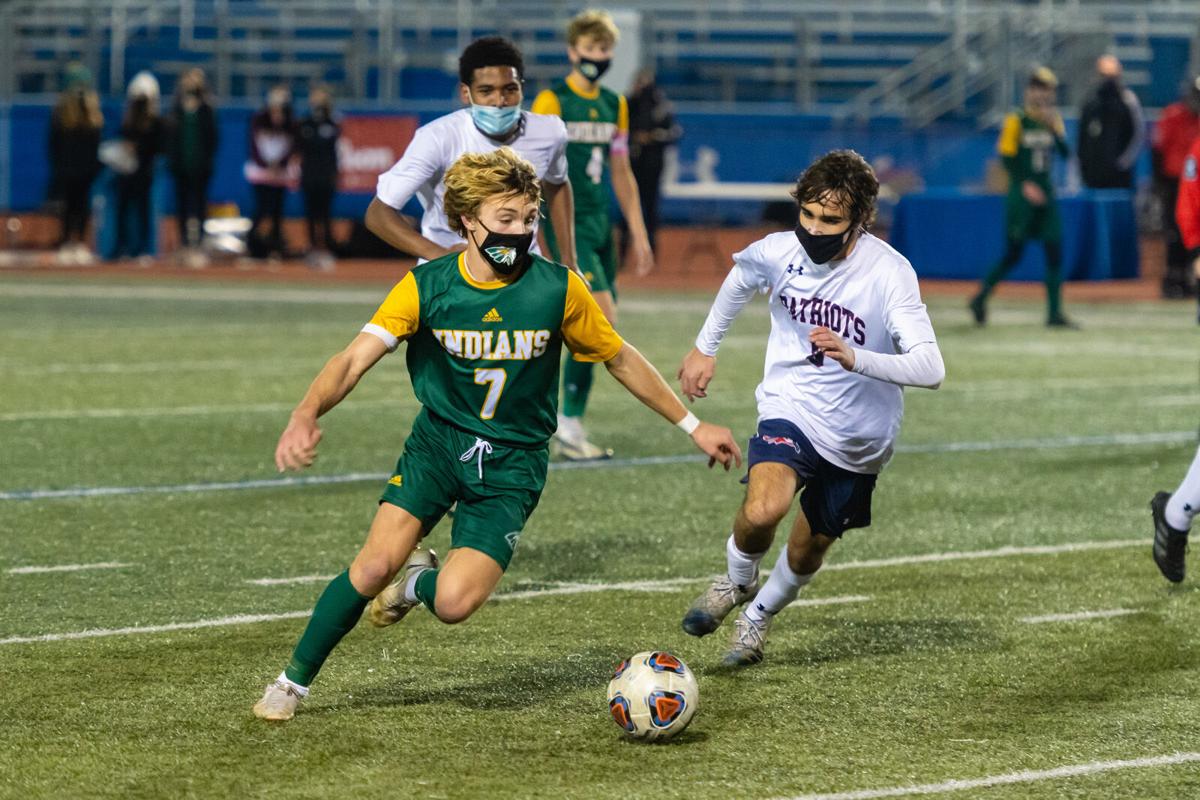 Jordan Illian, No. 7, races Newark Charter School opponents for the ball during the 2020 state championship. The Indians this week continued their dominance on the soccer field, with an 8-1 victory over Delmarva Christian High School. 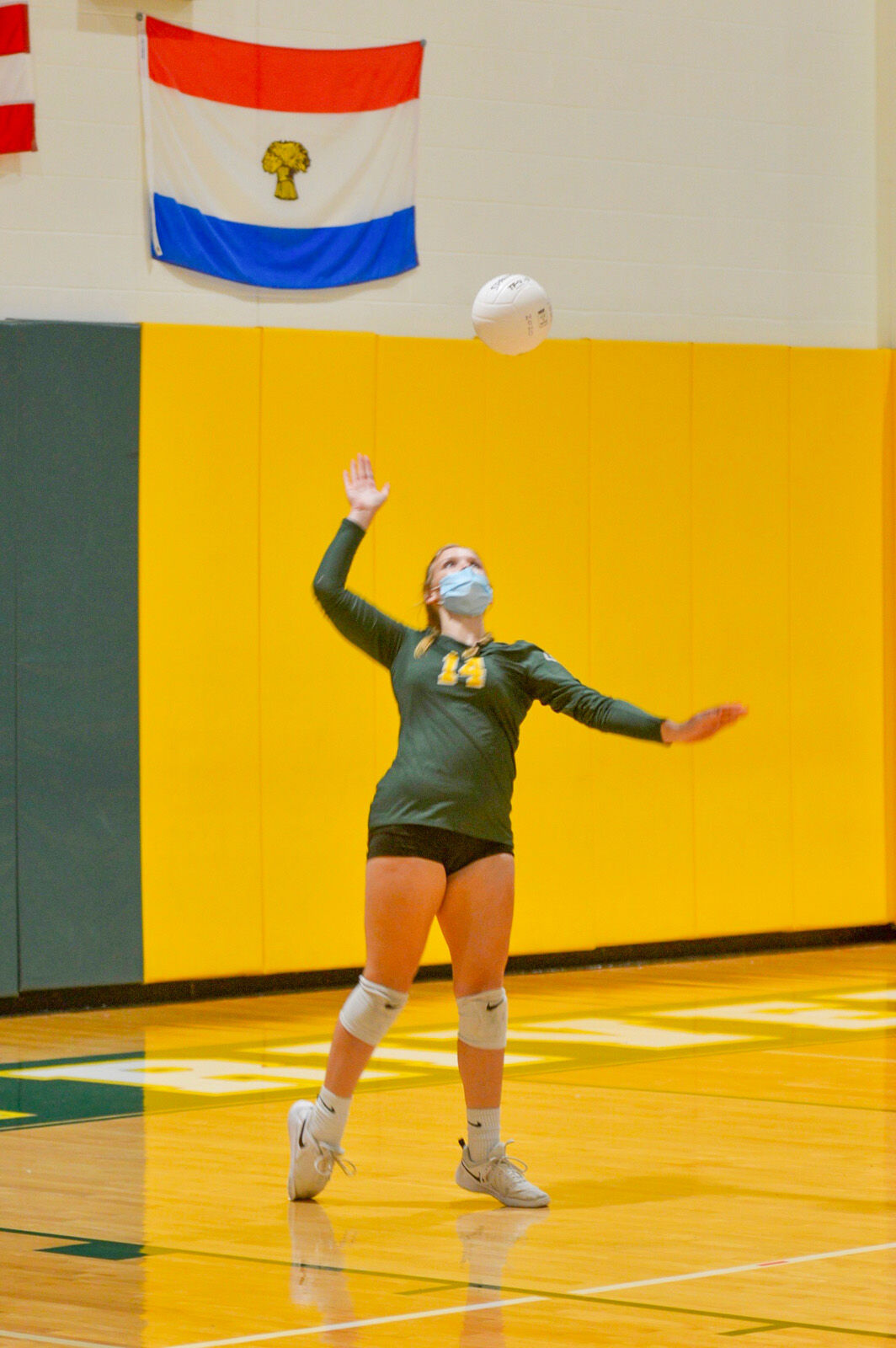 Let’s call the 2021 version of the Indian River High School boys’ soccer team “The Avengers,” because when they are all playing together — and on the same page — they are virtually an unstoppable force.

Jordan Illian would clearly be the team’s Tony Stark — a.k.a. Iron Man — as he has been leading the charges from the moment the ball hit the beautiful Bermuda grass on the IR campus’ pitch.

Such was the case once again on Monday, Oct. 4, when Illian scored three goals and assisted on three others as the Indians crushed Delmarva Christian, 8-1, to improve their season mark to 5-1-1. It was the second straight win for IR, who are now off until Tuesday, Oct. 12, when they’ll travel to school-district rival Sussex Central for a battle with the Golden Knights (4-1).

Illian, Dominic Delaney, Jose Savala-Saldivar, Blake Morgan and Connor Bird all scored in the rout of the Royals, with Illian playing a hand in all first-half goals.

The junior would drill home the opening goal of the game just 2:30 into the contest, before assisting on the first of Delaney’s two goals on the afternoon not even four minutes later. He added his second helper at the 15:40 mark, when Savala found the back of the net.

The second half was nearly a carbon copy of the first, with the Indians dominating and controlling the ball up and down the pitch. Delaney picked up his second of the contest at the 46:50 mark with Parker Steele getting the nod for the assist. Morgan punched a shot home in the 57th minute to make it 6-0 for the locals.

Delmarva Christian got on the board with a goal from Gavin Catron in the 66th minute.

That brief moment of excitement for the Royals was short-lived, as Bird buried a shot into the goal on an assist from Illian a couple minutes later, with Illian wrapping up the scoring with his third of the match, in the 69th minute.

All told, the Indians finished with a 31-5 edge in shots for the contest, while also recording a 4-2 advantage on corner-kick chances. Senior Reece Stone made three saves, while freshman Kai Kelley turned aside one shot.

According to the Stern Sports Bureau — the Coastal Point’s very own in-house sports data and research expert, Mike Stern — Illian now has 110 points in his career, thanks to 42 goals and 26 assists. He has 14 goals and seven assists through just seven games this season.

The Indians have seven games remaining in the regular season, with a road contest at Laurel set for Thursday, Oct. 14, following the date with Sussex Central. IR will close out the home portion of their regular season with four straight matches, with Charter School, Cape Henlopen, Sussex Tech and Sussex Academy.

They will wrap up the 2021 campaign with a road trip to Woodbridge to take on the Blue Raiders before heading into the DIAA Division II state playoffs to defend their state championship from a year ago.

Samantha Derrickson got the Indian River High School field hockey team on the board first at the 9:41 mark of the first quarter for the initial 1-0 lead in their non-conference tilt with host Caravel Academy on Tuesday, Oct. 5.

However, the Bucs answered with a three-spot in the second quarter to take a 3-1 lead into the halftime intermission.

Brynn McCabe cut into the Caravel lead with a goal at 7:22 of the third quarter to bring the Indians within 3-2, but the Bucs answered once again to push their lead back to two goals with just 26 seconds left in the third.

Neither team was able to score in the fourth, as both battled until the final horn.

The loss dropped the Indians to 0-5 to start the season and is their first five-game losing streak since their 2013 season. It is also the longest stretch to start a season without a win since that 2013 season.

With lots of youth making their first runs through the varsity ringers, as well as a new head coach, it was bound to be a tough season. That being said, the Indians are battling, and are improving every time out.

This has certainly been their toughest stretch to start a season, with all five of their opponents being annual state playoff contenders, and two of them — Delmar and Cape — being multiple-time state champions.

It was a stellar performance from start to finish for the Indian River High School girls’ volleyball team as they cruised to a 3-0 win over visiting Early College High School at Delaware State University on Thursday, Sept. 30.

The Indians took the straight sets by scores of 25-2, 25-2 and 25-9. All told, IR had 29 aces in the three sets, which is the most in any of their matches this season. The win improved IR’s season mark to 3-4, as they’ve now won three of their last four contests.

Seniors Ava Tomlinson and Emma Rickards led the Indians with eight service aces each, while sophomore Taylor Conaway had five to go with her three assists. Tomlinson also had a kill on her stat line.