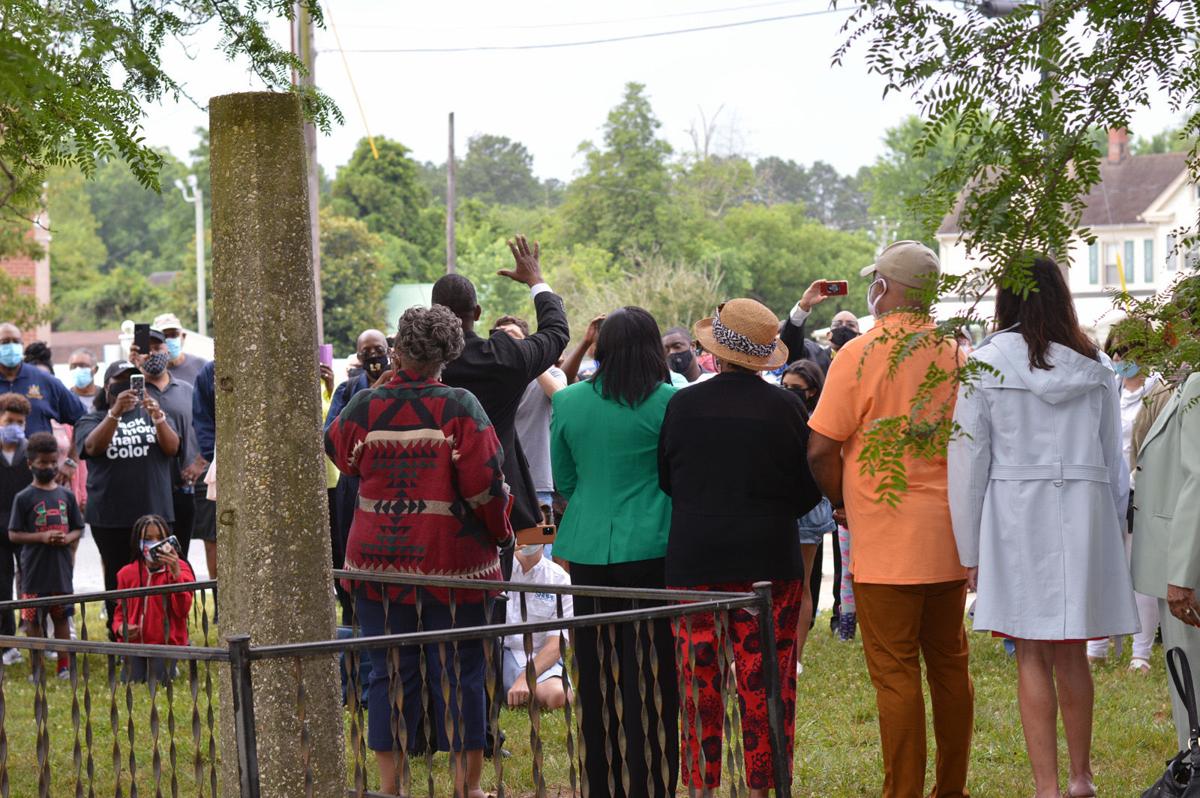 On Wednesday, July 1, Delaware Division of Historical & Cultural Affairs representatives and members of the public gathered to mark the removal of a troubling legacy of the state's past: the last whipping post on display on public grounds in Delaware. 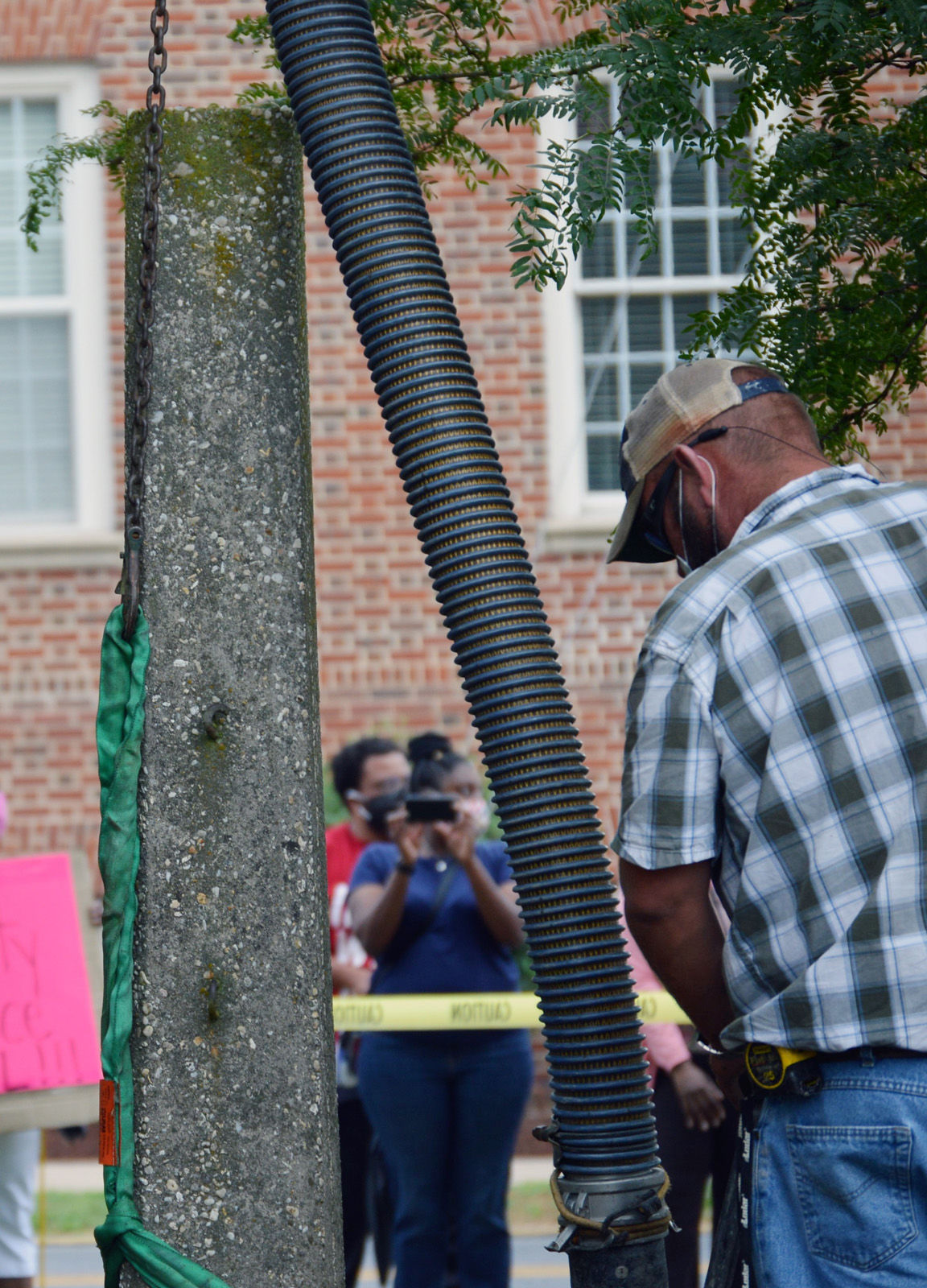 On Wednesday, July 1, in Georgetown, the last whipping post on display on public grounds in Delaware was removed, to become part the State's collection of historical artifacts.

On Wednesday, July 1, the Delaware Division of Historical & Cultural Affairs (HCA) removed a whipping post from public display on the grounds of the Old Sussex County Courthouse near The Circle in Georgetown.

The decision to remove the whipping post was made in response to calls from the community and in recognition of the violence and racial discrimination that its display signified to many Delawareans, they said.

“Finally, Delaware is removing its last ‘Red Hannah,’ the whipping post, from the public’s view,” said Reba Hollingsworth, vice-chair of the Delaware Heritage Commission, in a June 30 announcement. “Such relics of the past should be placed in museums to be preserved and protected for those who want to remember the cruel, inhuman, barbarous acts perpetrated on our citizens.”

The post will be moved to a Division of Historical & Cultural Affairs storage facility with other historical objects and artifacts, including a whipping post that once stood near The Green in Dover.

“It is appropriate for an item like this to be preserved in the state’s collections, so that future generations may view it and attempt to understand the full context of its historical significance,” said HCA Director Tim Slavin. “It’s quite another thing to allow a whipping post to remain in place along a busy public street — a cold, deadpan display that does not adequately account for the traumatic legacy it represents, and that still reverberates among communities of color in our state.”

Officials said the HCA intends to work with historians, educators and leaders of the African American community in Delaware to explore plans for future display of this artifact in a museum setting, where it can be properly contextualized and interpreted.

This whipping post was located on the grounds of the Sussex Correctional Institution south of Georgetown. The facility was established in 1931, but the exact date this particular post was installed is not known. In 1992, the warden donated the post to HCA. The post was installed for public display at the state-owned Old Sussex County Courthouse site in September of 1993.

According to the HCA, the history of corporal punishment in Delaware goes back to the earliest days of colonial settlement and included the use of the whipping post and the pillory in all three counties into the 20th century. The punishments were imposed for a variety of crimes throughout history and were disproportionately applied to persons of color, they said. Those sentenced to the whipping post could be lashed up to 40 times for a single offense.

Hollingsworth, a lifelong Delaware educator, historian and civil rights advocate, witnessed a whipping in her childhood that still lives in her memory:

“When I was a child in the late 1930s, I saw a man being whipped at the Kent County jail at the corner of New and Water streets in Dover. On a Saturday morning, my dad, Solomon Ross, had driven to Dover from Milford to conduct some business. When he saw the crowd gathered at the front of the jail, he parked his car and he, my sister Vivienne and I joined the crowd around the wire mesh fence, which surrounded the jail yard.

“There, we saw a man, naked to his waist, with his wrists shackled to an 8-foot post, being whipped by a man with a cat-o-nine-tails that had a short handle with nine rawhide thongs, which appeared to be about 18 inches long,” she recalled.

“Even though the whipping occurred more than 80 years ago, I still remember the eerie silence that was pierced by the lashes of the whip. After each lash, the warden would loudly count each lash.

“I don’t remember how many lashes the man received that day, but the incident is a vivid memory every time I pass the jail on New Street, even though Red Hannah has been removed. When I drive around The Circle in Georgetown, my childhood emotions fill my heart.”

The last use of the whipping post in Delaware took place in 1952. Delaware was the last state to abolish the whipping post, removing the penalty from state law in 1972 through an act of the General Assembly signed by Gov. Russell Peterson.