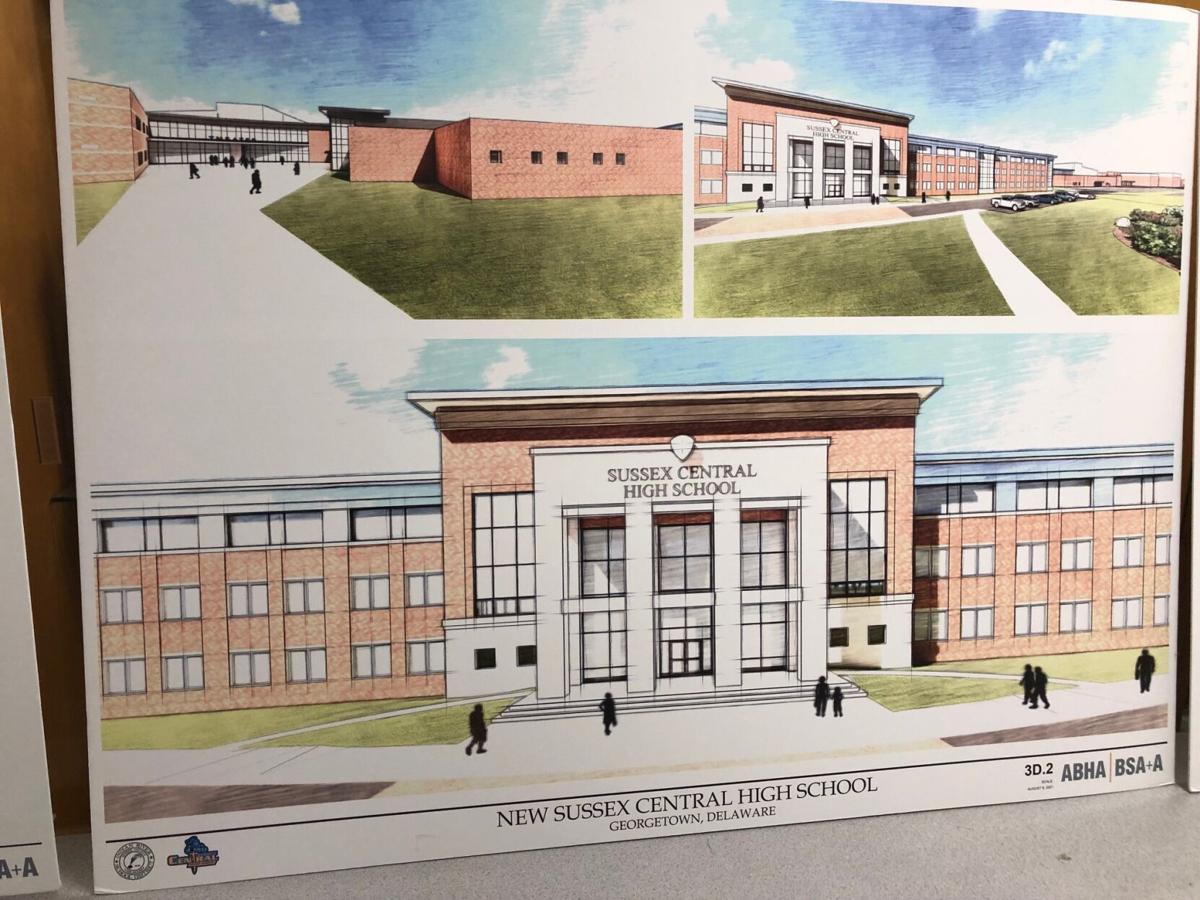 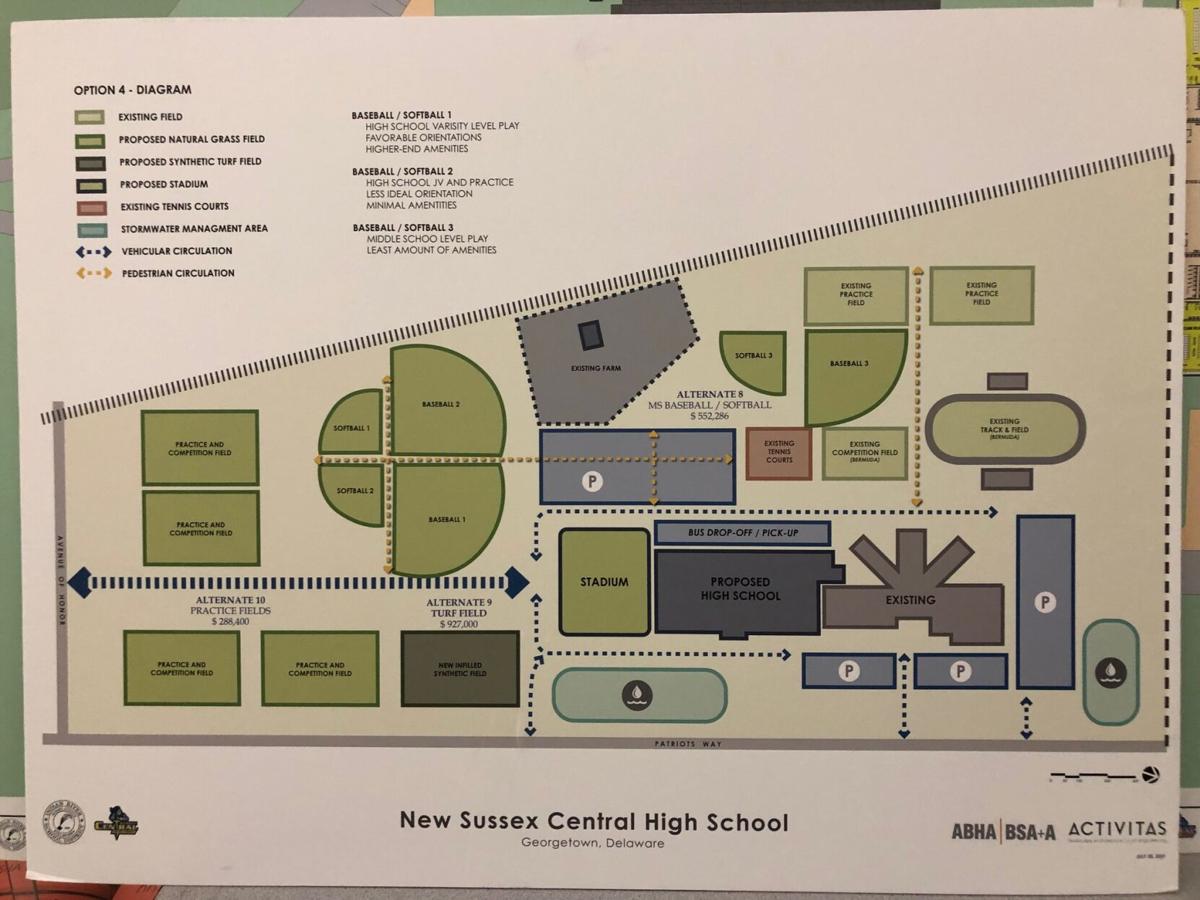 With a new Sussex Central High School desperately needed due to overcrowding, the IRSD Board is working to finalize a design for the new facility. This week, the board approved proceeding with designing plans for the project that include 'alternate' spaces beyond the basics, such as a science wing and agriculture building. 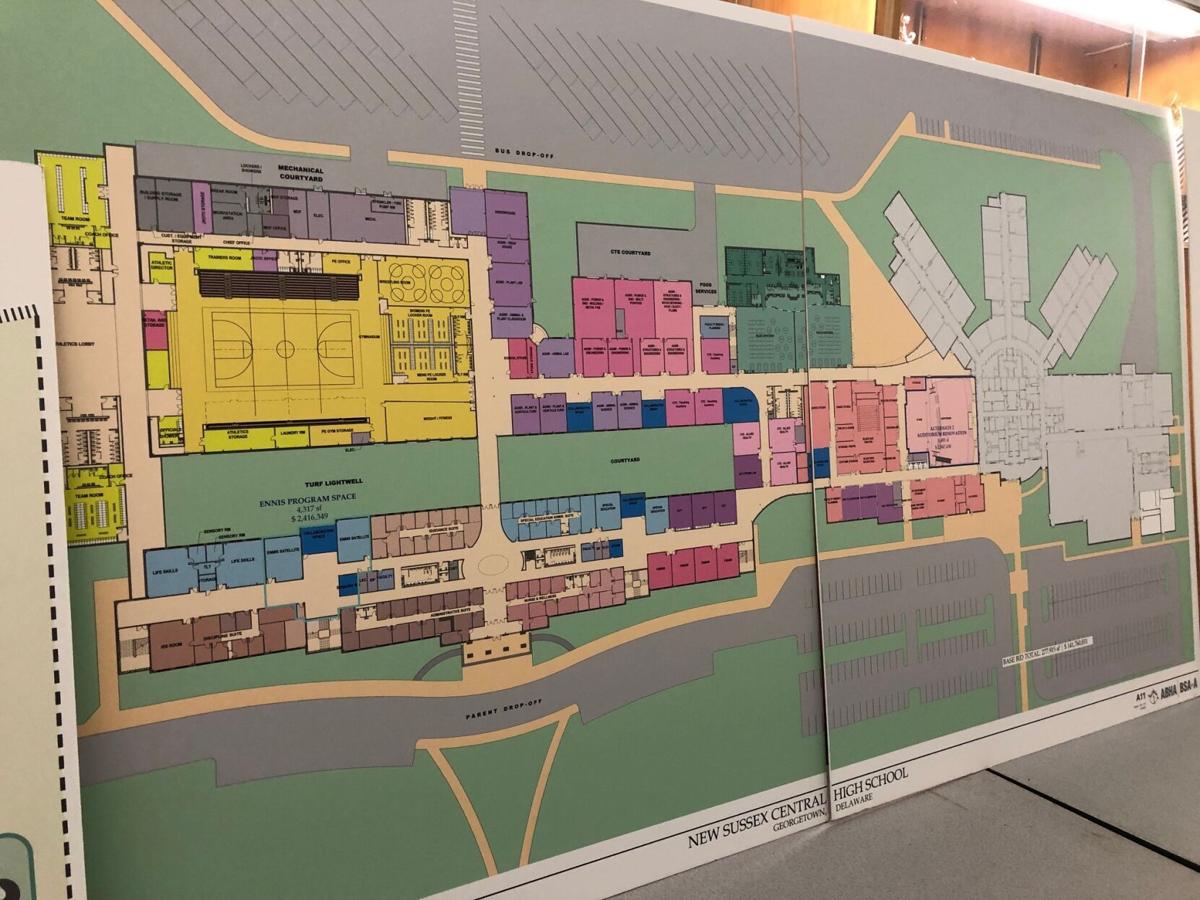 A new Sussex Central High School would be located on Patriot's Way near Georgetown and is expected to come in above existing estimates of cost, due to increasing construction costs. 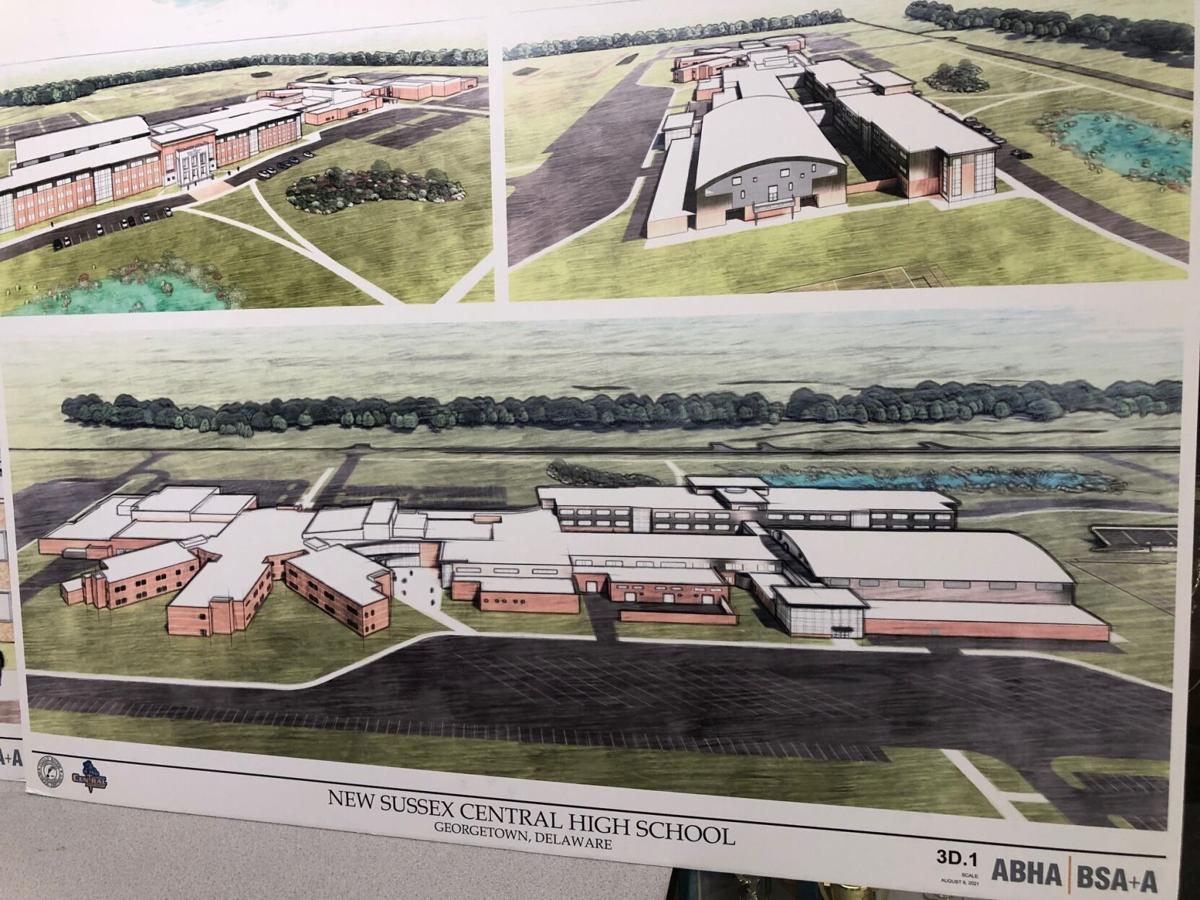 The proposed new Sussex Central High School is pictured from overhead in a series of architect's drawings. 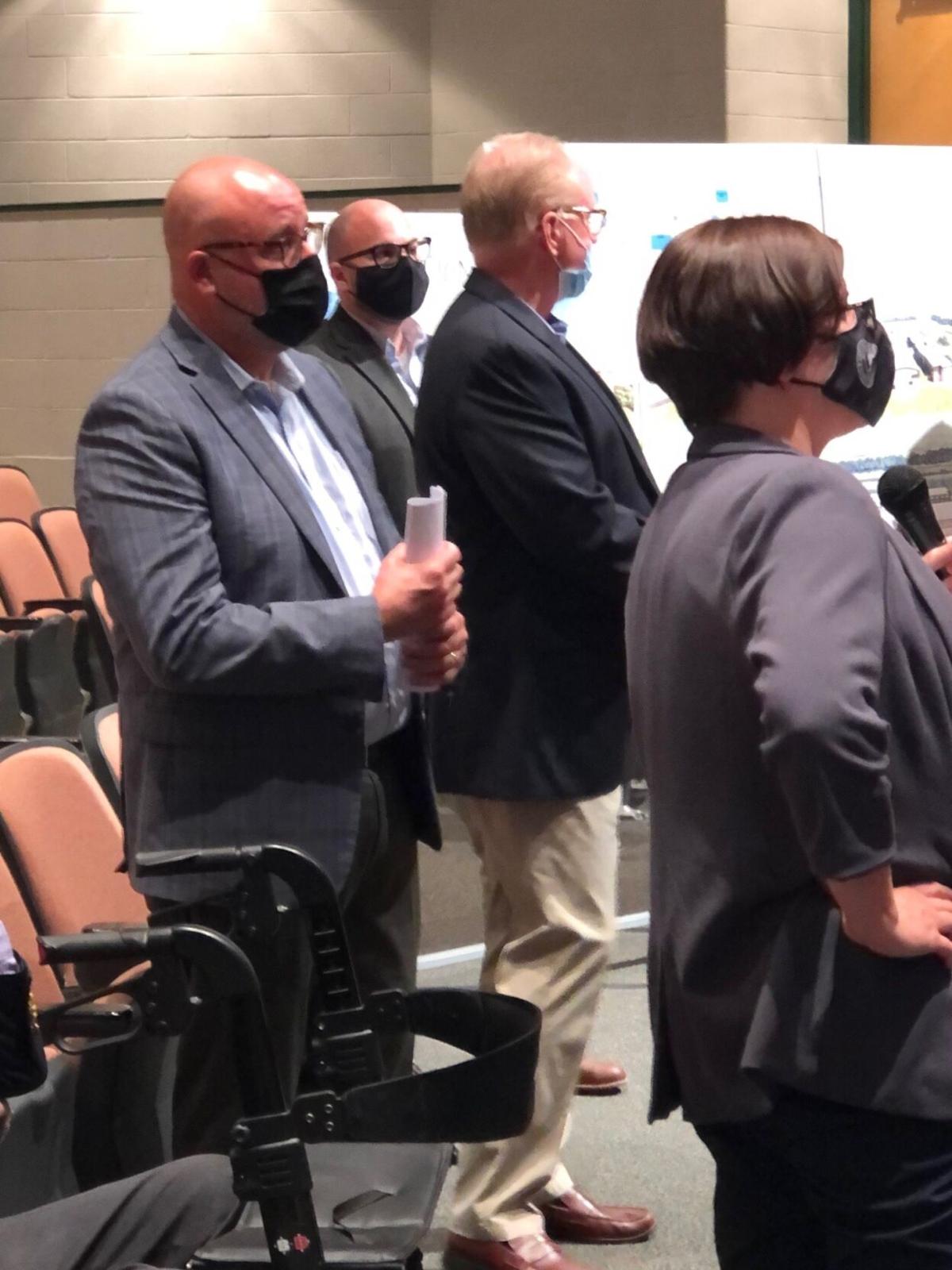 Carl Krienen, foreground, and his team from ABHA architects of Wilmington, present the new drawings and schematics for the new Sussex Central High School — due to break ground next fall. The target completion date is August 2025.

The Indian River School District Board of Education unanimously agreed Tuesday night to proceed with designing plans for the new $146 million Sussex Central High School in Georgetown, betting on the fact that the State of Delaware will provide the gap funding required to build necessary “alternate” spaces.

Calling the $146 million passed in a bond referendum for the new high school (with an expected completion date of August 2025) the “base bid,” architects and designers presented additional options to build a more fully equipped school, to be located on Patriot’s Way near Georgetown.

The gap between the current construction plans and the Sussex Central High School envisaged with all alternate options is some $20 million, due to some factors even beyond the additional spaces. The board received the new plan with some consternation.

Rodney M. Layfield, president of the board, said, “I am appalled by this [plan]. We passed a referendum to build a new high school. It was certified as a necessity. And now we are $20-21 million behind on budget.”

“In the past, there have been percentages each year until the building is completed,” he said of the usual 5 percent increases in anticipated final cost. “Now, with the design [underway], we have nothing built-in to this project. We are behind right now, and it is very early on.”

“We are not trying to build something grandiose or nicer or bigger than Cape Henlopen; we are building what we need for our students,” Layfield commented. “That was passed by the public via a referendum. And we are into it this far, and we don’t have enough money from the State” to complete the high school with all spaces recommended.

Despite those concerns, members of the school board responded to the ABHA architectural recommendations this week with a decision to proceed with planning for all contingencies.

“If we don’t move forward with what we have now, it simply delays things,” said Board Member Donald G. Hattier (District 4). “We have to move forward with the idea that the pressure will be on the State for us to have to catch up” on budget allocations.

“We did our due diligence and proper planning,” said Hattier. “Normally, there is a cost-escalation factor which tends to run 5 percent” per year.

“This is something nobody could have counted on!” Hattier added.

If the 5 percent cost escalation set-aside per year had been effective, it is likely that an additional $7.3 million per year would have been held in escrow or reserves to bridge the budget shortfall.

“The increase since this virus has hit us. If we don’t get money from the State, would preclude us from building. Unforeseen items could derail us. It’s not just Indian River — we are going to need public support to play catch-up,” said Hattier.

“I support what they are asking for,” said Hattier in making the motion to proceed.

Joseph W. Booth, supervisor of buildings and grounds for the district, said his goal for this week’s school district meeting was to present the project’s budget and the schematic design, and “You have the alternates in front of you, and we decided this was the best approach.” He termed the alternate high school elements “high priority, but still alternates.”

The primary alternates and non-budgeted items under the current referendum-approved money of $146 million for Sussex Central High School include:

“Tonight’s a big night for the approval of the schematic design,” said Booth. “We can maintain our schedule with design development and construction documents.”

The next presentation of the design with all alternates would be in February 2022.

“The completion date is the end of August 2025,” Booth said. “We feel comfortable with the schedule.”

Carl Krienen, chief architect, told the Coastal Point, “Even if the alternate components do not come in, it will still be a wonderful, beautiful high school.”

“It’s very exciting for our firm and for the district,” said Krienen, principal partner of ABHA BSA+A architects, about the decision.

Asked if he felt the debate with the IRSD was unusual in terms of cost concerns, Krienen said, “I was not surprised at all. All of the districts are suffering now because of what was approved based on the [construction] formula, which was out-of-date and has since changed after this project happened. They have increased the funding formula to allow the State to give more funding to these projects.”

The market pressure of what COVID-19 has done to the building market is also a factor, noted the ABHA architect.

“We will design for the science wings and hope that the market regulates better or that the State gives more relief, to acknowledge the formula and the market pressure over the next year,” Krienen declared.

The district is slated to start building the new Sussex Central High School in a year.

Krienen clarified that a “good bid day” is that IRSD will do better than what the present estimate affords.

“You cross your fingers and hope the bid, which is market-driven, will simmer down a little bit,” he said. “Maybe we can get more than what we anticipated.”

“Maybe the market will come down a little bit,” offered architect Krienen.