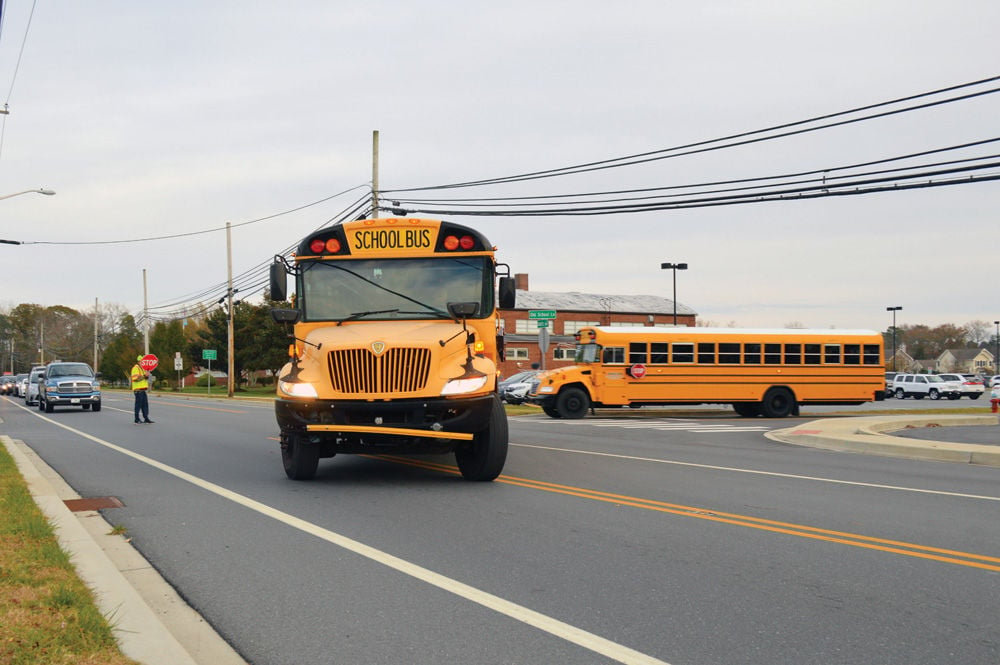 A crossing guard helps each school bus safely exit onto Route 26 at Lord Baltimore Elementary School in fall of 2018. 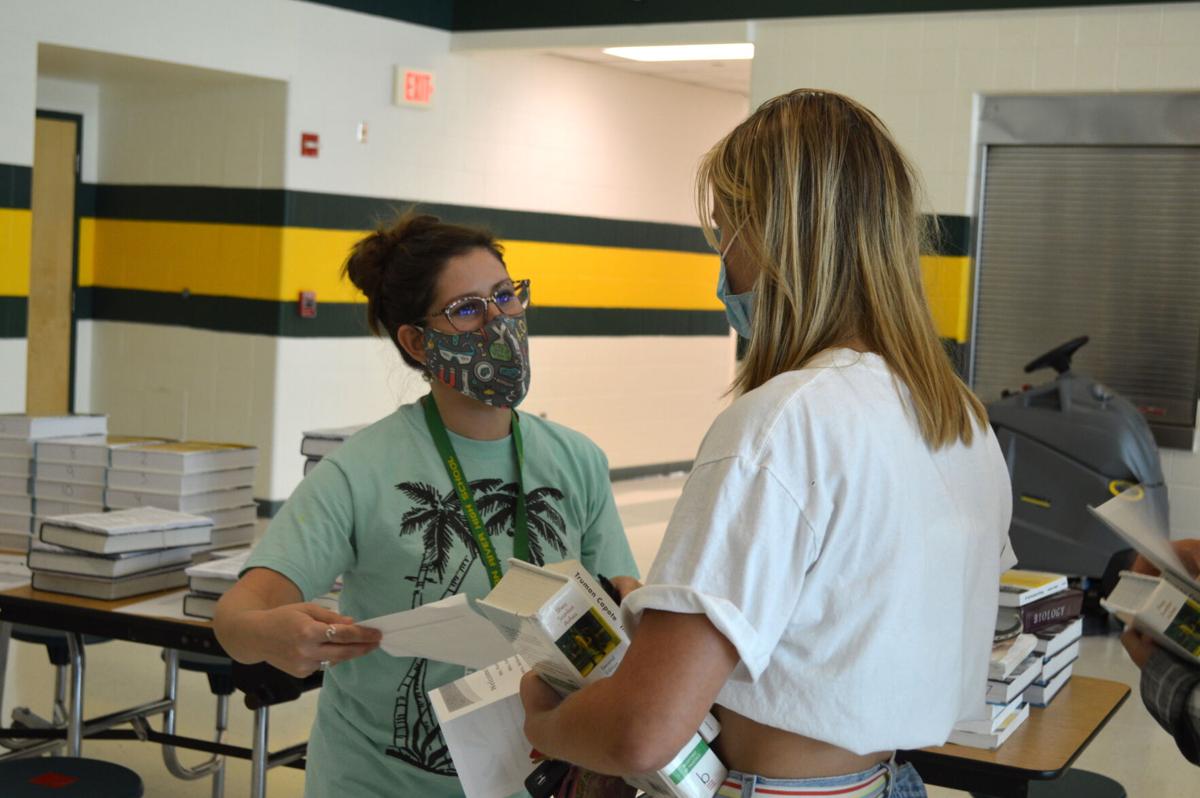 Megan Hines explains that many science textbooks are online this semester, as Indian River High School students pick up books for remote learning in fall of 2020.

The Indian River School District will bring students in Grades 4 to 8 back to school buildings sooner than originally planned. The change applies to students who chose hybrid learning but who have been waiting to actually begin the in-person portion.

All students in the district began coursework on Sept. 17, but only about 1,200 students in pre-kindergarten through first grade have physically been in the buildings. Now, the IRSD Board of Education has approved bringing Grades 4 to 8 back one week earlier than the original timetable.

Currently, there are no changes to Grades 2-3 starting in-person instruction Oct. 5, as previously scheduled, or to Grade 9 starting Nov. 9 and Grades 10-12 starting on Nov. 19.

“In our conversations with principals and staff, we feel comfortable that we can roll this in as smoothly as with our [youngest students],” said Superintendent Jay Owens, adding that the Delaware Division of Public Health (DPH) “saw no issue with an expedited roll-in.”

It was a unanimous decision at the Sept. 28 board meeting (with Anthony Cannon and Derek Cathell absent).

The expedited return to school does only apply to students in the hybrid model. It does not change the schedule for remote students working fully from home for the first marking period.

Updated schedules are online at www.irsd.net. Families should disregard the printed start dates in the printed 2020-2021 district handbook and calendar, officials said.

While students in Grades 4-8 will be coming back to school sooner than originally planned, transportation issues prevented the district from considering an early return for high-schoolers.

“Our largest contractors are experiencing a decline in their drivers,” Owens said. “They do have drivers on the horizon, but it is about a two-month [training] process … to get the proper licensure.”

Although the administration will keep trying for high school, “It does not look like that is a possibility at this point.”

“We are seeing some bus drivers decide to discontinue their work because some of our drivers are elderly and they do have underlying health conditions,” said Assistant Superintendent Karen Blannard.

The IRSD and the Delaware Department of Education are brainstorming ways to fill or work around the 19 total driver vacancies in the district, but “As of right now, we can’t expedite the roll-in for our high-school students because of the driver shortage.”

Some trainees are in the pipeline, so more drivers should be ready for the November return of high-schoolers. But driver shortages have affected Delaware school districts for years. The IRSD reluctantly entered the transportation business a few years ago, managing its own 10 buses and staff. But that can mean IR competes for drivers with its regular contracted companies. The district has been reaching out to some of its own staff, such as paraprofessionals, to drive a route before and after the regular school day. But training still takes a few months.

Parents are being asked to watch for upcoming surveys so the IRSD can get accurate counts on who needs busing, and who can drive themselves or their children to school.

The district had planned a very cautious schedule for bringing students back. But that doesn’t mean it’s been easy.

“It’s a big lift for our teachers. That’s why we’re fortunate: we’ve got a tremendous staff and they’re working hard to try to make this work for the community,” said Owens, although he acknowledged the “unbelievable” challenge of making everything work in a district of 15 schools and more than 11,000 students.

Owens commended the district staff, school nurses, custodians and administration for their work in following guidelines for the new school year.

“I am happy to report that our school opening went very well over the last two weeks. … They’ve been receiving instruction both in schools and with our hybrid model at home, synchronously and asynchronously.”

Some employees did question whether an expedited schedule could muddy what has been a smooth process thus far.

“We agree with idea getting students back into school is in their best interest. However, we are concerned that … our members need time to make adjustments to instruction that will be necessary to facility face-to-face learning,” said Linda Ockman of the Indian River Education Association (IREA).

She also requested that teachers be given more planning time, alone or with their instructional teams, since some staff have said they are feeling micro-managed during the first few weeks of school.

“I think there’s a lot of hard work being done in the district, and it is greatly appreciated,” said Board President Rodney Layfield. “But it is a daunting task for working parents with their children not in school. … I appreciate what we’re going, but I’m all about an aggressive plan to get ’em back into school. Working parents are having a very tough time making ends meet and keeping their students up to par.”

High-school athletics are also now being allowed to proceed in Delaware, with an abundance of precautions. With the Delaware Interscholastic Athletic Association (DIAA) reversing its earlier decision to postpone the fall sports season until the winter, the IRSD board on Tuesday approved hosting the fall season of sports, pending the State’s approval of the athletic plans.

Although the State is focused on high school, the IRSD said they hope to later find activities for middle-schoolers as well.

“I do think sports are a very important aspect of our students’ lives,” said Owens, citing the importance of “socialization, interaction, among other things that sports bring.”

“If you can be on a football team or on a hockey field playing a sport, you also need to be in the classroom,” said Board Member Leolga Wright.

In other IRSD news:

For a brief moment, students filled the cafeteria once again. They got their new schedules, said hello to their new teachers and walked back o…