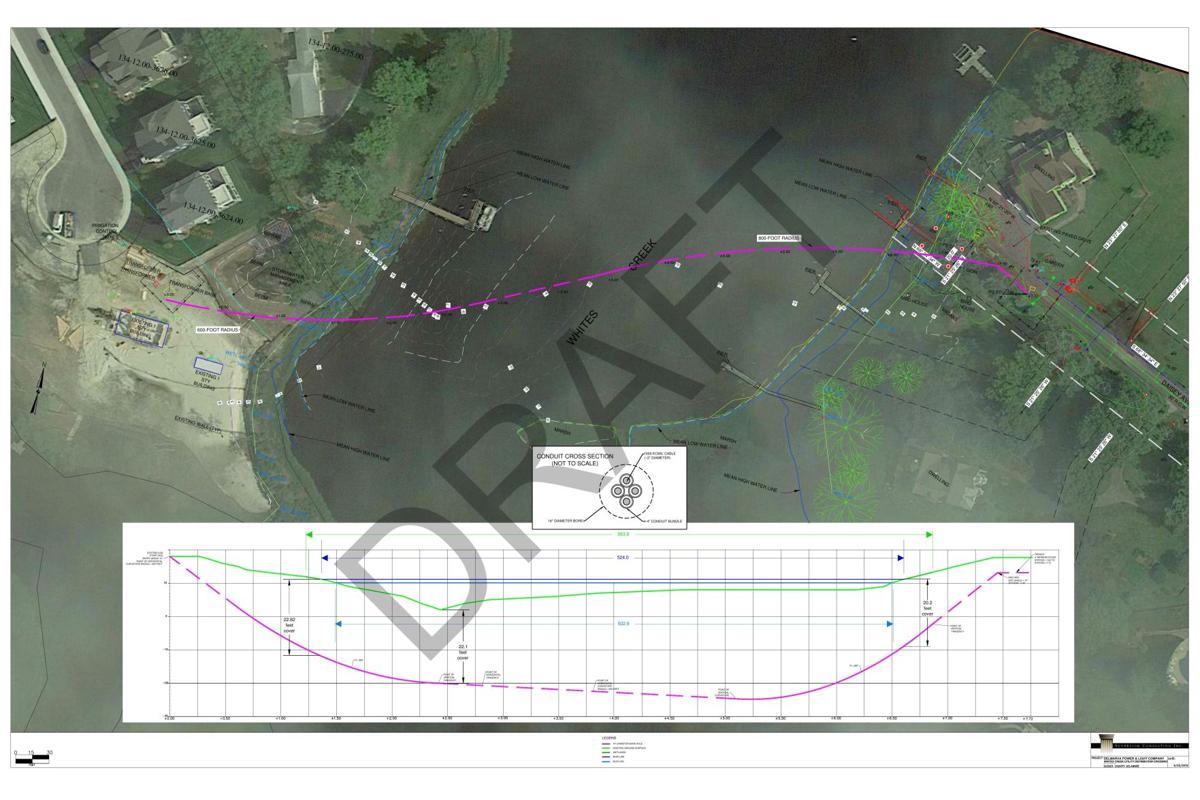 Delmarva Power & Light has been given permission to run electric lines under Whites Creek in Ocean View. This additional line will create a looped circuit, which will help prevent power outages in the area.

“Currently, Delmarva Power has received all of the mandatory permits for the Whites Creek project,” said Timothy Stokes, spokesperson for Delmarva Power, an Exelon Corporation company. But that doesn’t mean the project will charge ahead.

“Due to the timing of permit approval, we don’t believe we can complete the work prior to Memorial Day, which is when we hoped to have the project completed — making it difficult for us to achieve our goal of limiting the impact to our customers and the community during the holiday,” he said.

Instead, “Our new construction time frame will take place in the fall, allowing us to work outside of the time-of-year restrictions.”

The project should take two weeks, maximum, for all underwater and dry-land installations.

Delmarva Power has been issued a State of Delaware Subaqueous Lands permit to install a 16-inch diameter, roughly 564-foot-long, electric power distribution line at least 20 feet below the mudline of Whites Creek. It will stretch from Daisey Avenue in Ocean View to Peaceful Lane near Millville.

“Customers in the vicinity of the project are currently served by a radial (i.e. dead-end circuit),” the application states. “Therefore, the purpose of the new 25kV line is to create a looped circuit, which will allow electric service to feed from multiple directions in the event of an outage.”

The public had concerns initially, so the Delaware Department of Natural Resources & Environmental Control (DNREC) extended the official comments timeline and held a public hearing on Oct. 1, 2019. That allowed many people to meet company officials and ask questions directly about the construction.

Whites Creek is a tributary of the Indian River Bay, so Delmarva Power has now obtained permits from local, state and federal agencies.

DNREC Hearing Officer Lisa Vest has recommended a 10-year lease for the project. Her 2020 report addressed public concerns but did not recommend denying or delaying the lease.

“No portion of the proposed project within the department jurisdiction will affect navigation, recreation, aesthetic enjoyment, natural resources or other uses of subaqueous lands,” she wrote.

This project will not impact the ability for future dredging projects. Whites Creek was dredged in the early 2000s to a depth of roughly 4 feet MLW.”

Because the lines are insulated far under the mud, the permit application does not make reference to any potential heat or electricity radiating from the lines. For installation, Delmarva Power will bore eastward under the creek soil.

Delmarva Power’s Jim Smith emphasized their goal of minimal impact on the adjacent housing developments, Foreside Commons and Solitude on Whites Creek, and to include adjacent property owners in deciding the location of the new electric box. The new lines will connect to an existing switch cabinet in Solitude and a new splice box on Daisey Avenue, then to the nearest wooden pole on Daisey. There would be no permanent structures directly in the subaqueous lands or wetlands.

The construction itself requires no dredging, since the insertion of the 16-inch pipe is expected to cause little disturbance to the mud. There will be erosion controls in place during the project.

“We look forward to completing the project later this year, given its importance to enhancing reliability in the area and strengthening the energy system,” Stokes said.

Delmarva Power has worked to improve the overall system, announcing a 36-percent decrease in the frequency of electric outages during the past five years.

“In 2019, on average, customers experienced less than one outage over the course of the year,

and if service was interrupted, crews were able to safely restore service around 94 minutes,” the company announced in February.

This year, mostly between September and December, Delmarva Power will also upgrade transmission poles, lines and other equipment along Route 1. The new transmission poles can withstand hurricane-force winds up to 120 miles per hour, as well as blizzard conditions.

Delmarva Power decided a creek crossing would be the most cost-effective and least impactful option to improve service reliability. The Whites Creek Electric Reliability Improvement Project is part of a broader strategic plan to strengthen the overall power system during times of peak demand, while continuing to reduce the frequency and duration of power outages. Delmarva Power has 13,000 miles of distribution lines and 1,500 miles of transmission lines.

Any person whose interest is substantially affected by the order can appeal to the Environmental Appeals Board by March 23. Details are online at dnrec.alpha.delaware.gov/environmental-appeals-board.