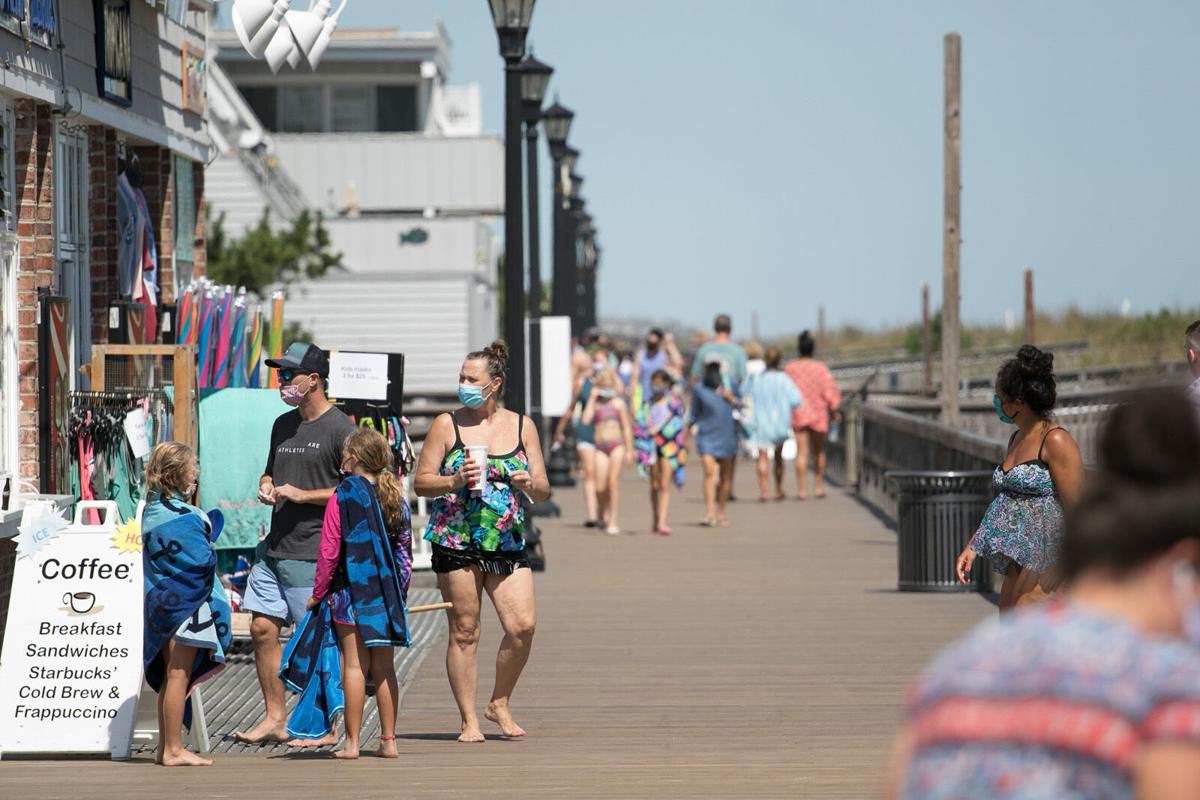 While some local businesses struggled in a summer of mask mandates and limited capacity for social distancing, the Bethany-Fenwick Area Chamber of Commerce reports that the local business community, as a whole, fared pretty well in the summer of 2020. 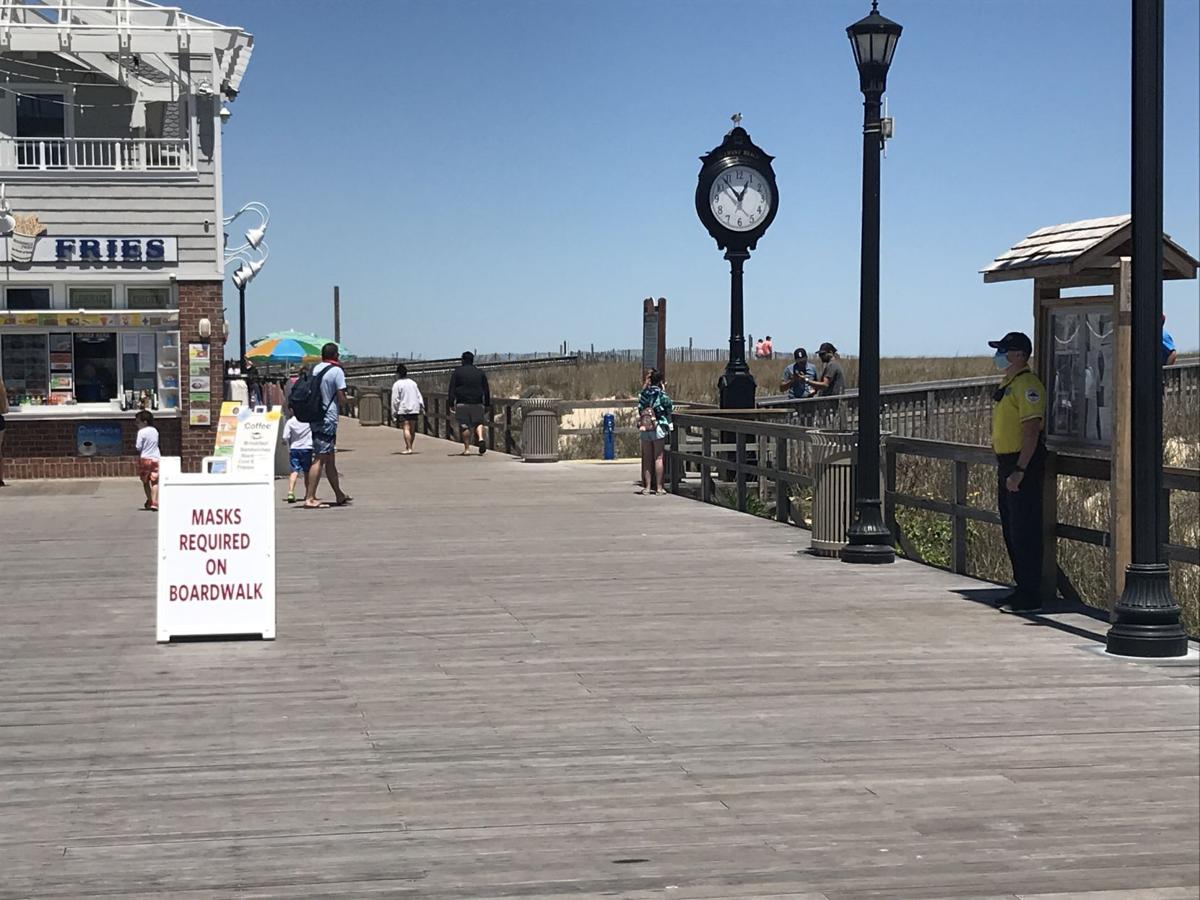 Officer Travis Shockley of the Bethany Beach Police Department stands watch on the boardwalk on May 31, 2020, ensuring that people comply with the mandatory face-mask policy. 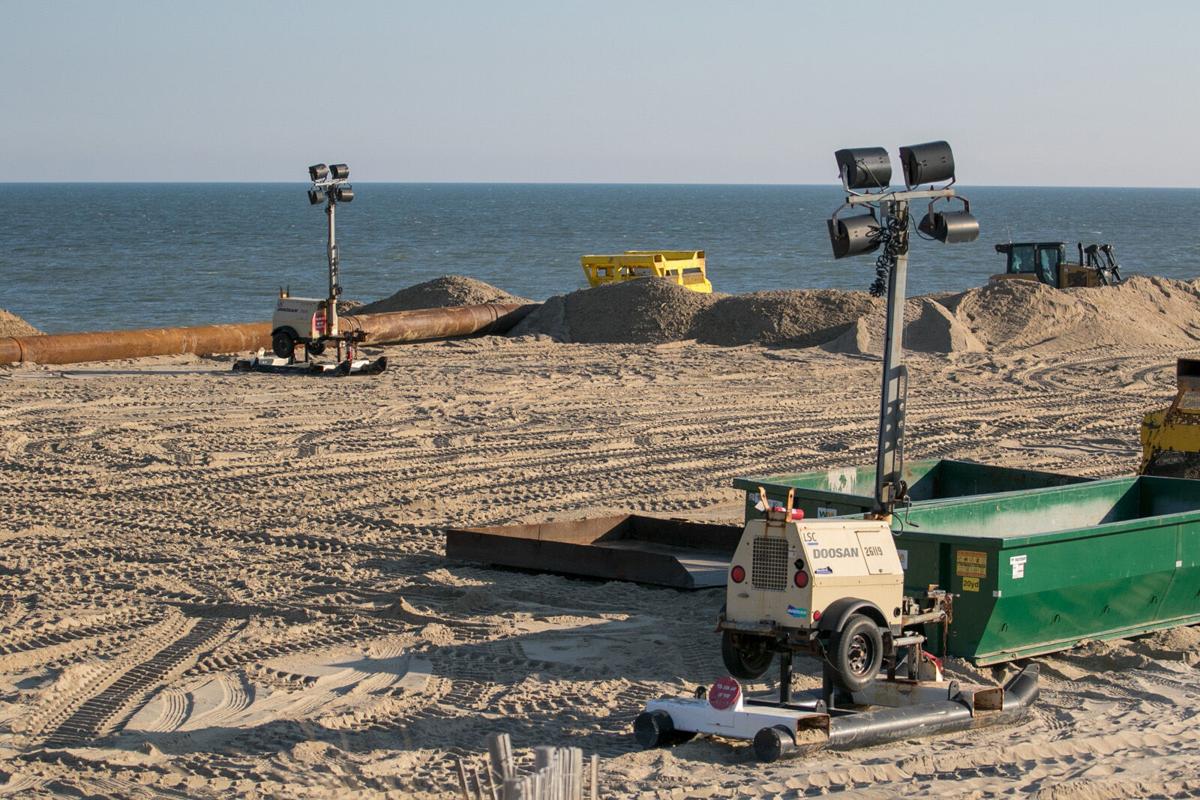 Replenishment in Bethany Beach on Thursday, Jan. 15, had piles of dredge sand awaiting proper placement on the reconstructed beach.

Bethany Beach Town Council members met in person on Feb. 19, though the council members each sat at separate small tables spread around the council meeting room, with Councilman Bruce Frye participating remotely via a large TV screen sitting behind the table with his nameplate. The public was, as has been the case for many months now, limited to watching via livestreamed video and sending in questions via chat or email.

The ongoing changes to council meeting formats are just one lingering remnant of the COVID-19 pandemic on the Town’s operations, and as spring nears, town officials are looking ahead to the 2021 summer season with both hope and concern.

Town Manger Cliff Graviet told the council they should expect a significant hike in seasonal employment costs for the Town this summer, as it tries to keep up with neighboring and competing towns on the issues of pay and other benefits for seasonal employees. Competition is fierce this year, he said, especially for police and lifeguards.

To top that factor off, Graviet said the main driver for costs is his direction to managers that they should over-hire for the summer season, based on the summer of 2020 and the additional strains the pandemic put on town employees.

Graviet said many of the seasonal police officers Bethany Beach had hired in 2020 resigned over the summer because they didn’t like the work involving enforcing the State of Delaware and Town of Bethany Beach mask mandates. Additionally, the Town at one point during the summer had 18 of its lifeguards quarantined over COVID concerns.

With that in mind, Graviet is looking to make sure Bethany’s rosters of lifeguards and police are particularly deep this summer.

“We want to get ahead of the curve,” Graviet told the council, admitting that effort “may not go as well as I’d like with the seasonal police.” He cited that Rehoboth Beach officials had recently discussed the difficulty they were already having in hiring seasonal police officers for the summer of 2021 — having been able to hire only about a quarter of the number of officers they’d usually have hired.

Graviet told the council that the Town is budgeting for this summer to be a normal one, as it would have been pre-COVID. He said they’re scheduling bandstand performances, movie nights and bonfires, but doing so recognizing that those plans may again have to be limited.

“I know I will probably be back asking the council to consider changes, unless there is a significant change with regards to COVID.”

“We hope it will be a normal summer, but we are doubtful,” he said, noting that Councilman Bruce Frye, who heads the Fourth of July Parade Committee, could be coming to him in the next month or so to discuss the parade, and that Graviet himself will likely be coming to the council soon to discuss the annual Fourth of July fireworks display, with the contract for that currently sitting on his desk.

“Any changes you want us to think about going into summer,” he said, he would ask they be raised soon, so that they can be put on the council’s meeting agendas for March or April and have those issues resolved before the summer.

The town was significantly impacted by the altered summer during COVID. Council Treasurer Jerry Morris said in his Budget & Finance Committee report on Feb. 19 that their review of the current fiscal year, which included the summer of 2020, had left the Town about $125,000 under its budgeted revenue, as well as $580,000 under its budgeted expenses.

Nonetheless, planning for a normal summer of 2021 is under way. Graviet said the Town was preparing to start mailing out residential parking permits in the next few weeks, in batches of 600. The mailing of the permits comes earlier than usual, Graviet noted.

The Town will also have a replenished beach for people to enjoy this summer, with the most recent replenishment project having completed last week with the planting of dune grasses on the newly reconstructed dune and erecting of dune fencing to protect them. He said that, as of Feb. 19, only a single small piece of piping remained on the beach from the project, and he expected it to be removed in the coming work week.

Graviet also reported that the Town and its Cultural & Historical Affairs Committee had received a portfolio from the display developer hired to create displays for the new town museum. He said council members could review the portfolio in the coming weeks, and he noted that funding for the work on the museum and its displays is in the Town’s budget and will be on the council’s March agenda.

Also getting some attention in the near future are the Town’s water towers, which have been the subject of complains regarding the amount of mold growing on them.

“It’s something the neighbors are concerned about,” he said, noting that the Town has the towers cleaned on a periodic basis, but that the wet winters have been creating more bloom of the mold, necessitating the speeding up of the timetable for the work. He said the contract had been issued last month and that the work would begin as soon as the contractor was sure there wouldn’t be a significant freeze to threaten the job.

Citing the loss of revenue from the summer of 2020, Graviet noted that there was no plan to go ahead in the immediate future with planned work at the new town park at Routes 1 and 26, including planned work to revise the design of the park’s entry sign. He said they would reconsider that if revenue comes back this summer.

“There’s nothing in the works right now,” he said, except preliminary plans to look at a proposed memorial area around the park pavilion. A memorial walkway had been discussed, but he said that could be years away, and in the meantime, there was discussion of placing memorial pavers around the pavilion. People could make a donation for a paver that would then be put in place around the pavilion.

And, as the Town heads toward what it hopes will be a normal summer season, it’s also finalizing its budget for the coming fiscal year. Morris said the Budget & Finance Committee had had to reschedule its planned Feb. 17 meeting to Feb. 25 (after Coastal Point press time) but would be budgeting for the summer season in expectation of a normal season.

The draft budget currently includes $10.56 million in total, with about $9 million of that being in operating expenses and another $1 million or so in capital expenditures. Morris said there are no plans to increase taxes or fees this year, as of the most recent draft of the budget, but that increases are scheduled to be considered next year, as part of the regular budget cycle.

A newly widened beach offers a great chance to get outside in the sunny weather on Feb. 16.