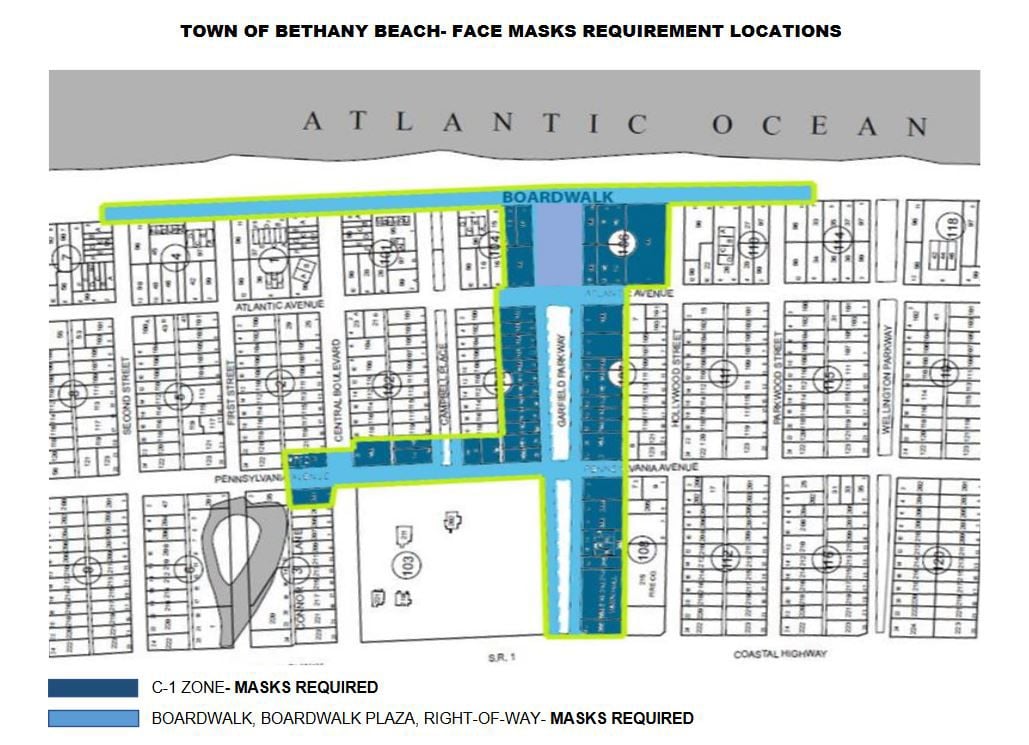 Bethany Beach's C-1 commercial zone how has a requirement to wear protective masks 24/7, due to the difficulty in social-distancing on the often crowded and narrow sidewalks. Anyone 13 or older must wear a mask or other face covering over their nose and mouth in this area unless eating or drinking, or unless they are exempt from the statewide mask mandate for medical reasons. 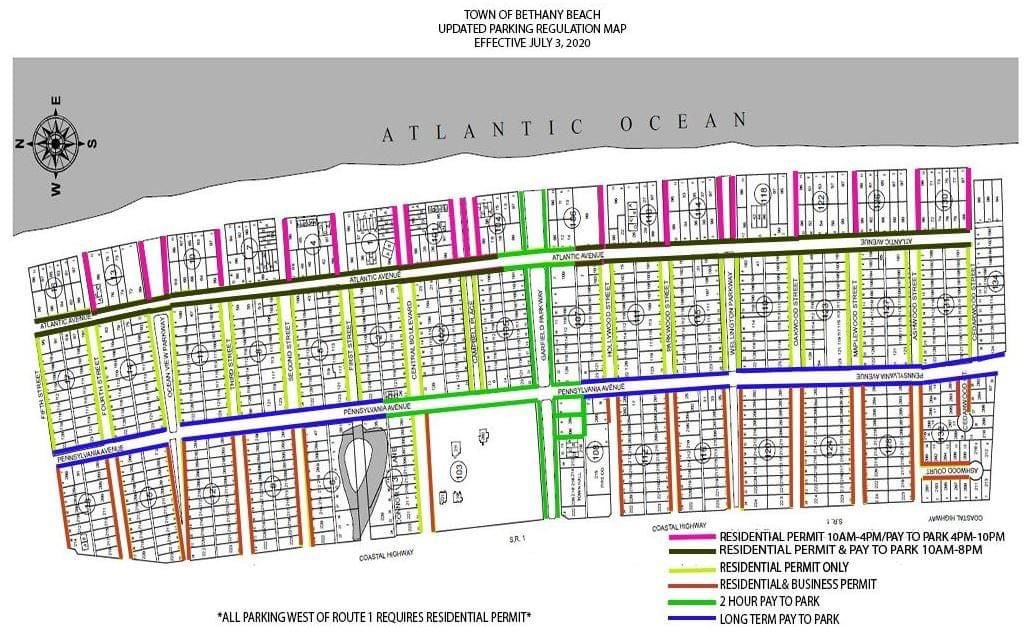 Revised parking restrictions in Bethany Beach as of July 3 are shown on this map.

Bethany Beach's C-1 commercial zone how has a requirement to wear protective masks 24/7, due to the difficulty in social-distancing on the often crowded and narrow sidewalks. Anyone 13 or older must wear a mask or other face covering over their nose and mouth in this area unless eating or drinking, or unless they are exempt from the statewide mask mandate for medical reasons.

Revised parking restrictions in Bethany Beach as of July 3 are shown on this map.

The Bethany Beach Town Council on Wednesday, July 1, during a videoconference meeting, voted to adopt a town ordinance requiring the wearing of protective masks or other face coverings 24 hours a day, seven days a week, in the town’s C-1 downtown commercial district, until further notice, in an effort to enable better enforcement of the existing statewide mask mandate during the COVID-19 pandemic.

As of 8 a.m. on Friday, July 3, masks or protective face coverings are required along the street, in shops, and in all other all areas of the C-1 commercial district (east of Route 1 in the Garfield Parkway area), as well as on the boardwalk and on beach dune crossings, 24/7.

The Town did not approve, nor even consider, a mask mandate for its beach, after such a mandate was adopted by Rehoboth Beach officials for that town on June 30. Masks are strongly recommended for use on the beach under the state mandate, but are not required there, where social distancing is possible.

Violation of the state mandate for masks is a criminal violation, while Bethany Beach’s new ordinance makes a violation of the mandate only a civil citation with a fine of $50 to $100. Town code enforcement officers will be enforcing the mask requirement, which applies to pedestrians, runners and cyclists ages 13 or older, with exceptions for those who are unable to wear them due to medical issues. Masks are also not required when eating or drinking.

Town Manager Cliff Graviet explained the ordinance as a mechanism to reduce confusion and enforcement issues with the existing state mandate by making it clear that all of Garfield Parkway is an area in which social distancing cannot be guaranteed and therefore masks must be worn there. He cited the narrowness of the town’s often-crowded sidewalks on Garfield Parkway as having made people being within 6 feet of each other all but guaranteed, as well as making it almost impossible for the Town to enforce the state mandate without an ordinance in place.

Graviet noted that the ordinance’s civil citations allow the town’s enforcement officers to issue a citation if someone refuses to comply with the mask mandate, while the statewide mandate requires a police officer to secure approval from the Attorney General’s Office to make a criminal arrest.

The ordinance defines masks as including most kinds of face coverings, from masks with ear loops to bandanas worn over the face. Face shields are also considered masks under the ordinance. But all such devices should cover both the nose and the mouth to be in compliance. Health officials urge people to wear masks to help prevent transmission of the COVID-19 virus, particularly if they might be unwitting asymptomatic carriers who could expose others to a potentially deadly illness.

Parking restrictions ramped back up, but not to spring levels

The council on July 1 also voted to once again limit parking in the beachfront lots between Atlantic Avenue and the beach to resident permit only, though only between 10 a.m. and 4 p.m. Citing recent crowding on the beach, beyond social distancing limits, and especially in the beach area around Garfield Parkway, Graviet recommended a partial reinstatement of restrictions that were put in place in March and then reduced on June 12.

Some business owners participating in the videoconference objected, saying it would harm their businesses, but Graviet and several council members said the step was the best compromise they could find between protecting the health and safety of the town’s residents, as well as its visitors, and doing as little harm as possible to the downtown businesses in the process.

Others participating in the meeting suggested that the parking restrictions would have a lesser impact on businesses than a Rehoboth-style mask mandate on the beach, which could be a possibility should the virus spread more extensively in the area.

Finally, on July 1 the council also voted to cancel the remaining bandstand entertainment schedule for 2020. They had already canceled all special events through July 15, but the recent uptick in COVID-19 cases in the beach area has brought renewed focus on the potential for public events to spread the virus.

Graviet said a number of special-event permits had been issued for outside events planned for the fall, but that the applicants had been warned that the approval was conditional and would be reexamined later in the summer.

The council also approved not offering town trolley service this summer, citing both social distancing concerns and sanitization responsibilities on the Town if it were to operate the shuttle buses. Also included in that decision was not permitting outside beach shuttles to drop off passengers in the town this summer, to help limit crowding.

We'll have more on the story in full coverage of the July 1 meeting, online later this week.

Enforcement was the key point in the discussions of the Bethany Beach Town Council on Wednesday, July 1, during a videoconference meeting aime…