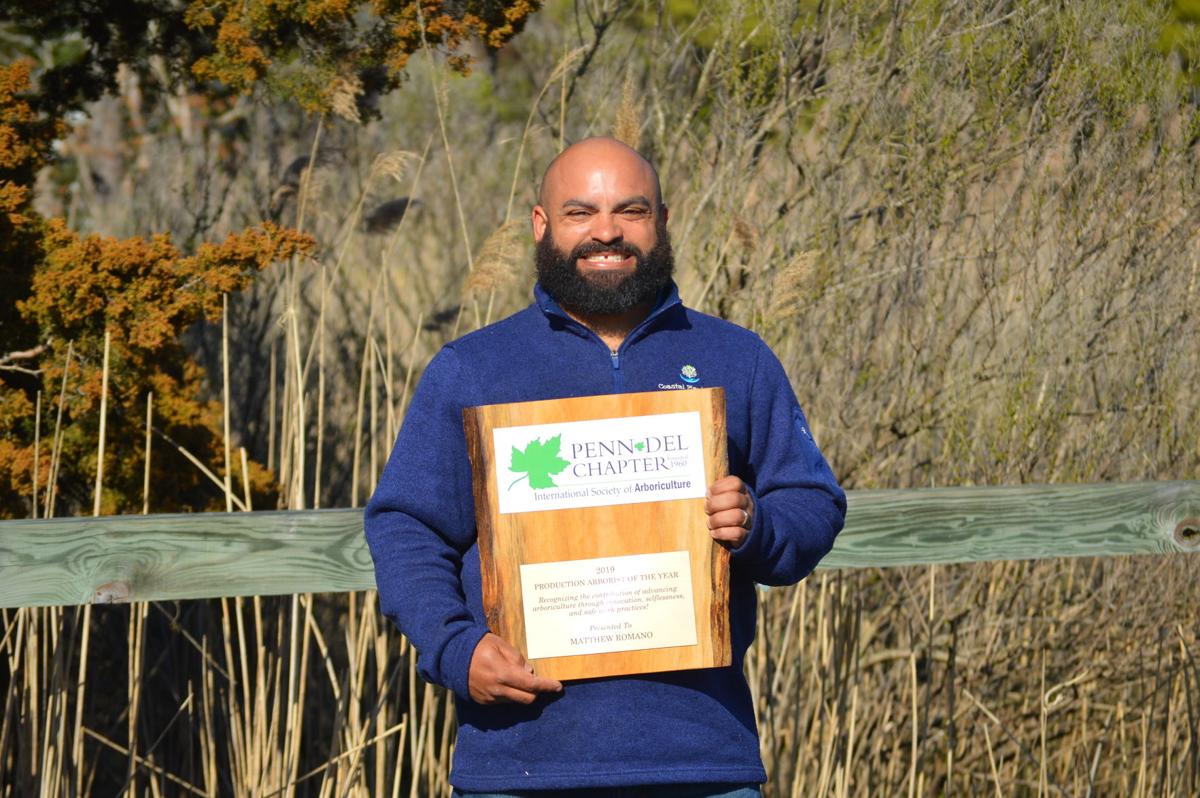 With a happy smile and love of trees, certified arborist Matthew Romano won the inaugural 2019 Production Arborist of the Year award. 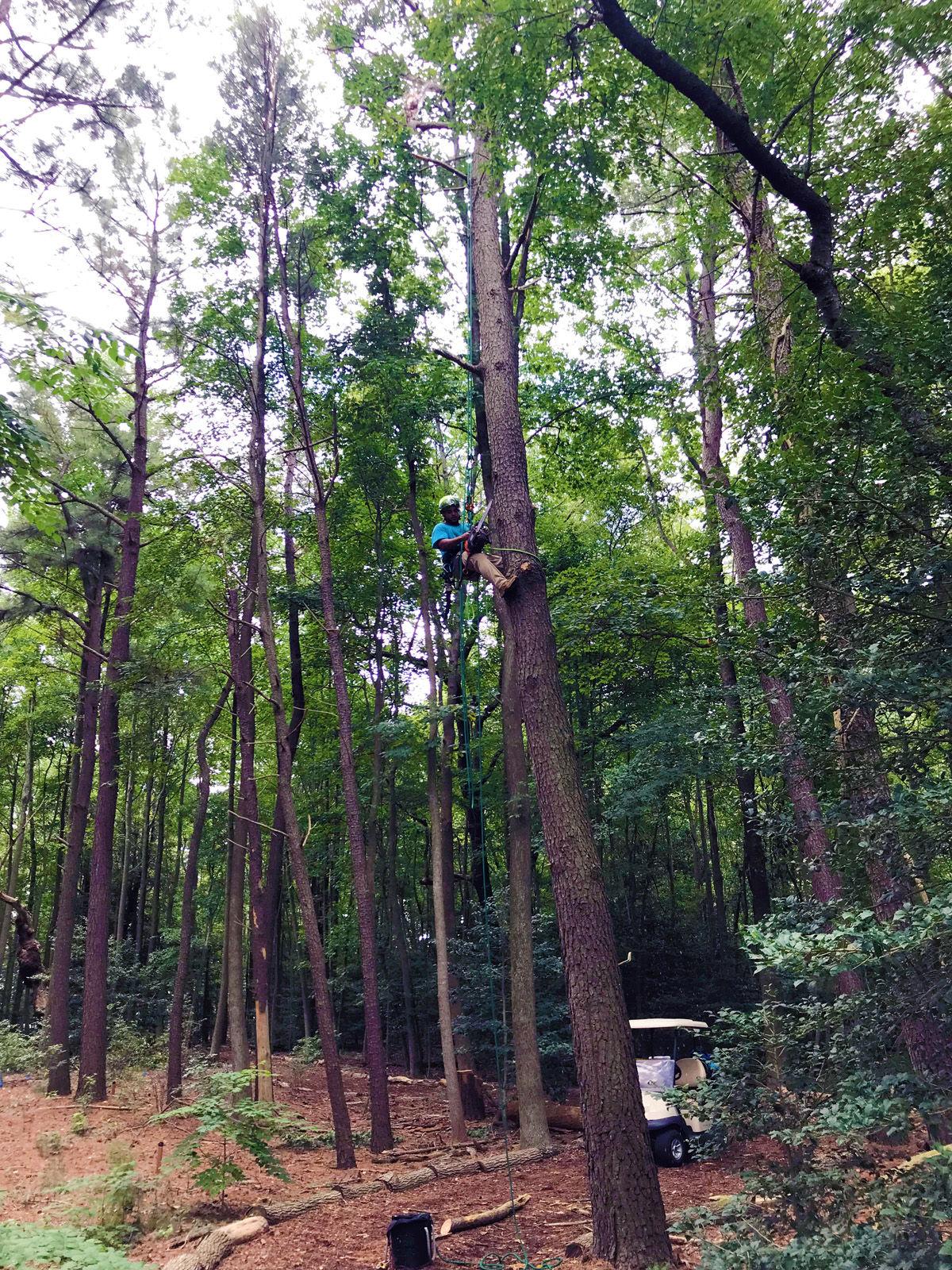 Matthew Romano, co-owner of Coastal Plant Care in Millville, won the inaugural 2019 Production Arborist of the Year award from the Pennsylvania-Delaware Chapter of the International Society of Arboriculture (ISA), a peer-nominated award for production arborists who do 'feet-in-the-tree' work. Ultimately, ‘You get a better idea of a tree if you’re in it,’ said Romano.

With a happy smile and love of trees, certified arborist Matthew Romano won the inaugural 2019 Production Arborist of the Year award.

Matthew Romano, co-owner of Coastal Plant Care in Millville, won the inaugural 2019 Production Arborist of the Year award from the Pennsylvania-Delaware Chapter of the International Society of Arboriculture (ISA), a peer-nominated award for production arborists who do 'feet-in-the-tree' work. Ultimately, ‘You get a better idea of a tree if you’re in it,’ said Romano.

Years after his school sports days, Matthew Romano’s job in tree service reminded him of the best part of athletics.

“It was really physical, and it made me feel like I was playing again. And I had the team, the people I worked with,” he said. “And I just fell in love with that.”

He learned the science behind arboriculture and, “That just opened up to me. I’ve probably been doing it 15 straight years.”

Romano’s passion was rewarded in February, when he won the inaugural 2019 Production Arborist of the Year award from the Pennsylvania-Delaware Chapter of the International Society of Arboriculture (ISA).

It’s a peer-nominated award for production arborists who do “feet-in-the-tree” work.

Romano has an iron will and “a smile that will brighten anyone’s day,” said Jeremy Hager, his business partner at Coastal Plant Care in Millville.

“He implemented a company motto this year, and every morning he and his crew share this statement ‘Let’s make someone’s day today.’ He is the definition of a professional arborist, and I consider it my highest honor to work with him every day.”

'Trees are really important. ... They reduce pollution. It’s studied that trees make you happy, having trees in your environment.'

Production arborists evaluate tree structures, roots, soil, history and more. They diagnose, and do trimming, planning and inspections, as well as anything it takes to reveal a tree’s secrets, from knocking on the trunk to climbing the highest branches.

“Trees are really important,” Romano said. “They reduce pollution. It’s studied that trees make you happy, having trees in your environment.”

They take care of themselves until something impacts and weakens them, Romano insists. They sometimes do best without human interference.

“Funguses and insects do not attack healthy trees,” he said. “So, the tree is usually stressed from a non-living substance,” such as changes in light or water; compaction of the soil; or damage from construction equipment. “Once you get the non-living problem, then the living problems come because they’re like, ‘This tree is sick, he can’t protect itself, so let’s go suck its sap.’”

Ultimately, to diagnose a problem, “You get a better idea of a tree if you’re in it,” he said.

Climbing can be very dangerous. As arborists pull themselves up, an old limb can break and fall unexpectedly. And that’s just one task to overcome.

“The challenges now are the climate changing. You see the winter we just had?” he said of the mild 2019-2020 season. “That brings more problems, because we have a longer growing season. Some of the animals that couldn’t survive here — now the climate’s warmer, they’re moving up from the south,” Romano said. “It’s constantly changing, constantly evolving, so you need to stay on top of it. That’s what we strive at: trying to stay up on the science and ahead of the problems.”

Using his power for good

Romano was chosen from at least 10 nominations for Production Arborist of the Year. He was honored by a surprise announcement at the 55th Annual Shade Tree Symposium in Lancaster, Pa.

“It was like a validation for all the effort and hard work I’ve put in, because it’s been a lot of long days and learning as I go. It made me feel good that I could achieve this,” especially having learned through on-the-job experience and independent study, rather than a college forestry program.

He had a particularly busy year: volunteering more than 100 hours at the new Delaware Botanic Gardens; improving safety and productivity at his company; and earning five various professional certifications. His work on tree inventories and master plans helped several communities earn a Delaware Tree-Friendly Community award.

“Each tree is different. A pine is a lot different than an apple. I don’t think I’ll ever be done learning,” he said.

'Funguses and insects do not attack healthy trees. So, the tree is usually stressed from a non-living substance.'

Originally from Montgomery County, Md., Romano has lived in Sussex County for about three years. Before creating Coastal Plant Care one year ago, he and Hager had previously worked together in Washington, D.C., and fate brought them to Delaware around the same time.

Romano thanked Hager and the company for their support, as well as his beloved fiancée, Erin McHale, whom he said he hopes to marry on the beach this year.

“Professionally, this is the pinnacle of my career right now. But this isn’t it, there’s going to be more. It’s more family and my dogs.”

“Earning an ISA credential is a voluntary activity that demonstrates you have the knowledge and skills to properly care for trees, as well as a high level of dedication to your profession and your community,” states the ISA, which has dozens of chapters and affiliates worldwide. (The consumer website for verifying ISA credentials is www.treesaregood.org/findanarborist.)

“We’re dealing with living things, so it’s not always a cut-and-go situation,” Romano said. “It’s all about the correct approach” for each tree, including diagnoses, prevention and care.

Delaware doesn’t require a special license for tree professionals, but Romano said he would like to see Delaware have more protections for existing trees.

He said he would support do-not-disturb limits or canopy restorations for new construction; buffers for existing forests; and restrictions on developers intentionally cutting roots.

“Here, they just build your house next to a tree that they cut all the roots for. That tree’s not going to die today or tomorrow — but in five years when the developer is gone and away? Now that tree’s dead, and it’s right by your house. And it’s going to cost a couple thousand dollars,” he said. “That’s the thing — we’re trying to get these laws and practices set in Delaware so we can prevent those types of things and protect the forests.