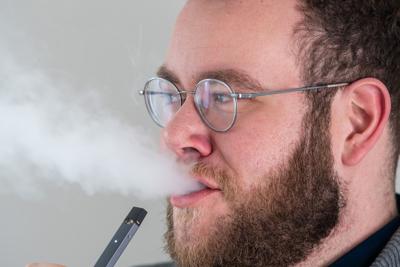 Being diagnosed with cervical cancer in her 20s was a shock for Jennifer Folkenroth, especially after she was told she’d have to immediately quit smoking — a habit she’d picked up when she was 12 years old — so treatment could begin.

“I was a very angry quitter. I’d smoked a pack and a half short of 10 years when I was diagnosed at age 22. Quitting was one of the toughest things I ever had to do in my life. It prompted me to make this my profession and help others through. I had the surgery and I have been clear. I even delivered two healthy boys since,” said Folkenroth, now national service director for the American Lung Association’s Tobacco Program for America.

“I was surrounded by smokers in my family, so I had no support system. That’s what drove me to want to get into tobacco-cessation and be that support system,” she said.

“I ended up going to the Mayo Clinic in Minnesota and went back to school. I had my bachelor’s in communications, and I went back to school to get into electronic media. I went to the Mayo Clinic and got my tobacco certification. I worked at WellSpan Gettysburg Hospital in Gettysburg, Pa, where I was born and raised. I worked at a hospital there 10 years doing bedside consulting — clinical, non-clinical — to help people quit.

“I thought, ‘Why not change my profession and do something every single day to help others overcome one of toughest things I ever had to do?’” she said.

Since beginning her position at the American Lung Association in 2013, she has often heard the New Year’s resolution, “I’m going to stop smoking.”

More than 70 percent of Delaware residents who smoke say they want to quit, she said, and that is wise. Smoking increases the risk of severe illness for those who contract the coronavirus because it causes patients to be more prone to lung inflammation.

“Any way we can inspire individuals, we absolutely must do it. It’s not easy to quit, but there are more than 50 million ex-smokers in the U.S., so don’t give up. The American Lung Association stands ready to help everyone quit tobacco products, including e-cigarettes, through programs specifically tailored for adults and for youth, to support schools in educating kids about the health risks of e-cigarette use and nicotine addiction, and how to quit tobacco use and to encourage parents to speak with their kids about the harms of e-cigarette use, before they start,” she said.

Among programs is Not On Tobacco, known as NOT, a voluntary teen cessation program. The INDEPTH (Intervention for Nicotine Dependence: Education, Prevention, Tobacco & Health) program can help recruit teens who become interested in NOT. (For additional information, see Lung.org/NOT.)

“First and foremost, make sure you are using a plan that is proven both safe and effective to quit for good. Despite what vaping companies want you to believe, vaping is not quitting smoking. Those e-cigarettes have nicotine and the Food & Drug Administration has not approved them as a quit-smoking device,” she said.

“We have great programs in Delaware to combat tobacco use. Traditional smoking is usually higher among adults than youth, but e-cigarette use is higher among youth and much higher than in the 45- to 60-year-old category. About 8,000 youth start vaping every day, and many are using dual products now.

“Years ago, you might have been a cigarette smoker or chewer. Not a lot of people were using multiple products, but we have recently seen an increase in dual use. The toxicity level and level of nicotine concentration in an e-cigarette and vaping is higher than what is on the label, so folks are not realizing how much nicotine they are putting into their bodies and how intense that dependency is becoming,” she said.

“Those who want to quit smoking might not know FDA-approved medications to help them quit can be covered by insurance. They might not be aware of that. … We are now seeing an uptick in counseling programs that are group-related but are done virtually.

“One positive programming aspect that has come out of the pandemic is it has challenged us to be innovation and to figure out ways to connect those who want to quit with others who also want to quit. This is new and something a lot of folks are enjoying. It’s been incredibly effective. It helps to have a partner while you are trying to quit. A quarterback doesn’t do touchdowns alone. By having peer-to-peer support, you are increasing your chances of successfully staying on track,” she said.

Some smokers switch to cigarettes advertised as “natural,” but Folkenroth said the wrapping paper and filter are dipped in a variety of toxic chemicals so they won’t burn faster than smoldering tobacco. Those chemicals could include arsenic or rat poison, she said.

Smokers accustomed to holding cigarettes in their hands can try chewing cinnamon sticks. Cinnamon curbs cravings and has no calories, Folkenroth said.

“Try to change your routine. Use your opposite hand. If you are used to smoking with your left hand and holding your coffee in your right hand, switch hands when you hold that cinnamon stick. Use a different coffee cup and have a different environment.

“The important thing is avoid those behavior triggers that keep you smoking.”

Are you a smoker? Are you trying to quit?

Health officials continue to urge smokers to quit, but COVID-19 has put a new emphasis on lung health. Are you a smoker? Are you trying to quit?

In the United States, smoking is the leading cause of preventable death, the American Lung Association reported.

• Worldwide, tobacco use causes more than 7 million deaths every year. If the pattern of smoking worldwide doesn’t change, by 2030 more than 8 million people each year will die from diseases related to tobacco.

• Cigarette smoking is responsible for more than 480,000 deaths per year in the United States, including more than 41,000 deaths resulting from secondhand smoke. This is about 1 in 5 deaths annually, or 1,300 deaths every day.

• If smoking continues at the current rate among American youth, 5.6 million of today’s Americans younger than 18 are expected to die prematurely from a smoking-related illness. This represents about 1 in every 13 Americans 17 or younger who are alive today.

• The percentage of American adults 18 or older who were current cigarette smokers in 2018 was 13.7.

• 30.3 percent of cancer deaths in Delaware are attributable to smoking.

From the American Lung Association via the CDC

It’s always a great time to quit smoking, but even better now

For all the talk about a deadly pandemic, political strife and opioid addiction — and all of those topics certainly merit a ton of discussion …

Bethany moving into budget season with summer in its sights