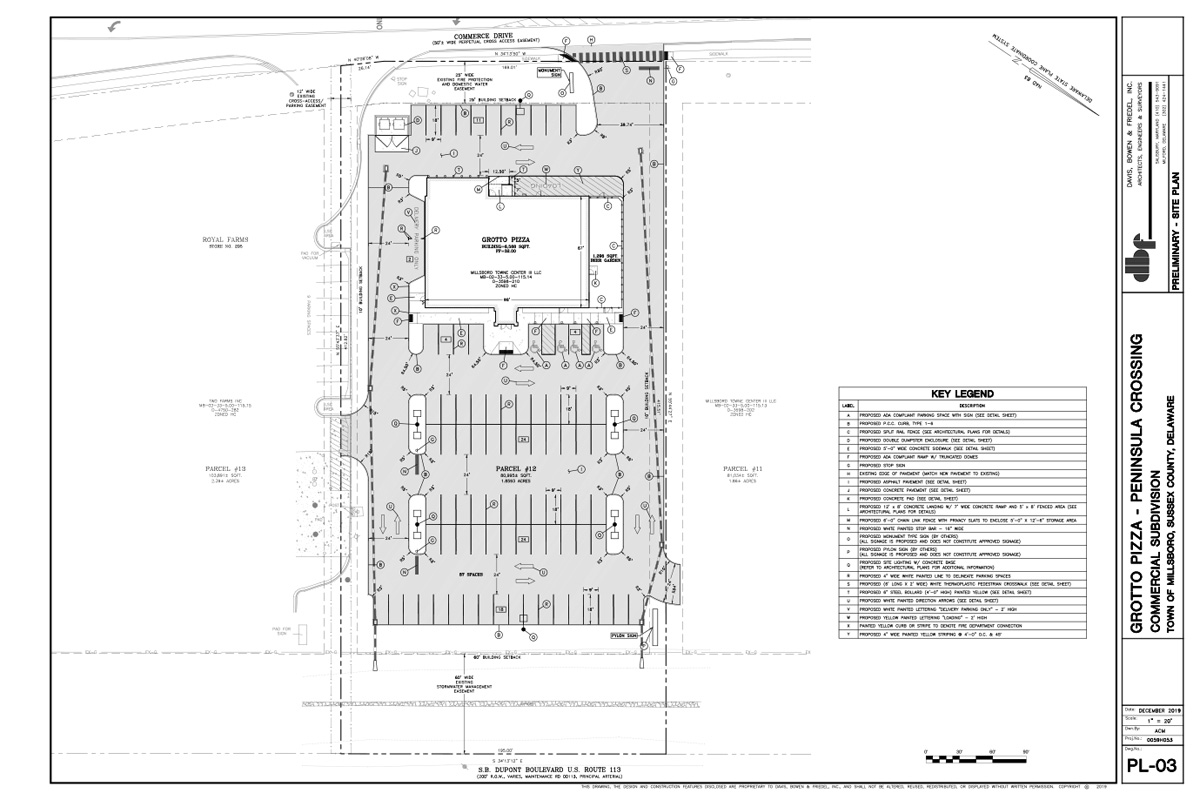 Grotto Pizza to open with sports bar in Millsboro

“It’s very exciting. Jamie was a big help in the recruitment process,” Hudson said about Burk.

“We hope this is the snowball getting bigger and bigger, and attracting more sit-down restaurants and sports bars. We want to be the place where you can live, work and play,” Hudson said of the town.

Grotto Pizza, a family-owned company founded in 1960 that uses the slogan “The legendary taste,” will open a 6,558-square-foot building in Peninsula Crossing on the southbound side of Route 113. Located near Royal Farms and Taco Bell, it’s expected to begin serving in the fall.

“The Town is extremely excited to announce the site plan approval of Grotto Pizza,” Burk later told the Coastal Point.

“Several months ago, we had a citizens’ survey, and sit-down restaurants — especially sports bars — were at the top of the list. Grotto is a well-known regional chain, and we feel it’s going to greatly benefit the Millsboro area,” Burk said.

Grotto has about 20 restaurants in Delaware and Maryland, including in South Bethany, Long Neck, Rehoboth Beach, Ocean City and Dover. Along with 15 specialty pizzas, menu items include pasta, subs, salads, soups and appetizers.

Grotto was founded by Dominick Pulieri, a native of Wilkes-Barre, Pa., who taught biology, general science and chemistry in the Smyrna Special School District from 1965 to 1970.

“From an early age, Dominick was making pizzas in his brother-in-law, Joseph Paglianite’s pizza restaurant in Harvey’s Lake, Pa. It was at Joe’s Pizza that Dominick’s passion for pizza was ignited. In 1960, Dominick, along with his brother-in-law, Joe and sister, Mary Jean Paglianite, ventured to Delaware to open a pizza restaurant. This was the birth of Grotto Pizza,” according to the business’ history on the website at www.grottopizza.com.

“During this first summer, pizza slices sold for 20 cents each and a whole pizza was $1.60. The challenge, however, was to introduce pizza in an area where it was not recognized.

“To create a market for his pizza, Dominick and his sister spent long hours talking to people and handing free samples to the people who passed by his restaurant. In July of that summer, he noticed he was starting to get many repeat guests and it was the local Sussex County guests, and later the tourists, who put Grotto Pizza on the map.

“In the years that followed, Grotto Pizza has continued to grow and prosper. In 1963, Grotto Pizza opened a second location on the boardwalk in Rehoboth Beach. In 1967, the original Rehoboth Avenue take-out stand moved to its present location in the arcade building,” the history states. In 1974, Pulieri opened Grotto Pizza as a year-round restaurant.