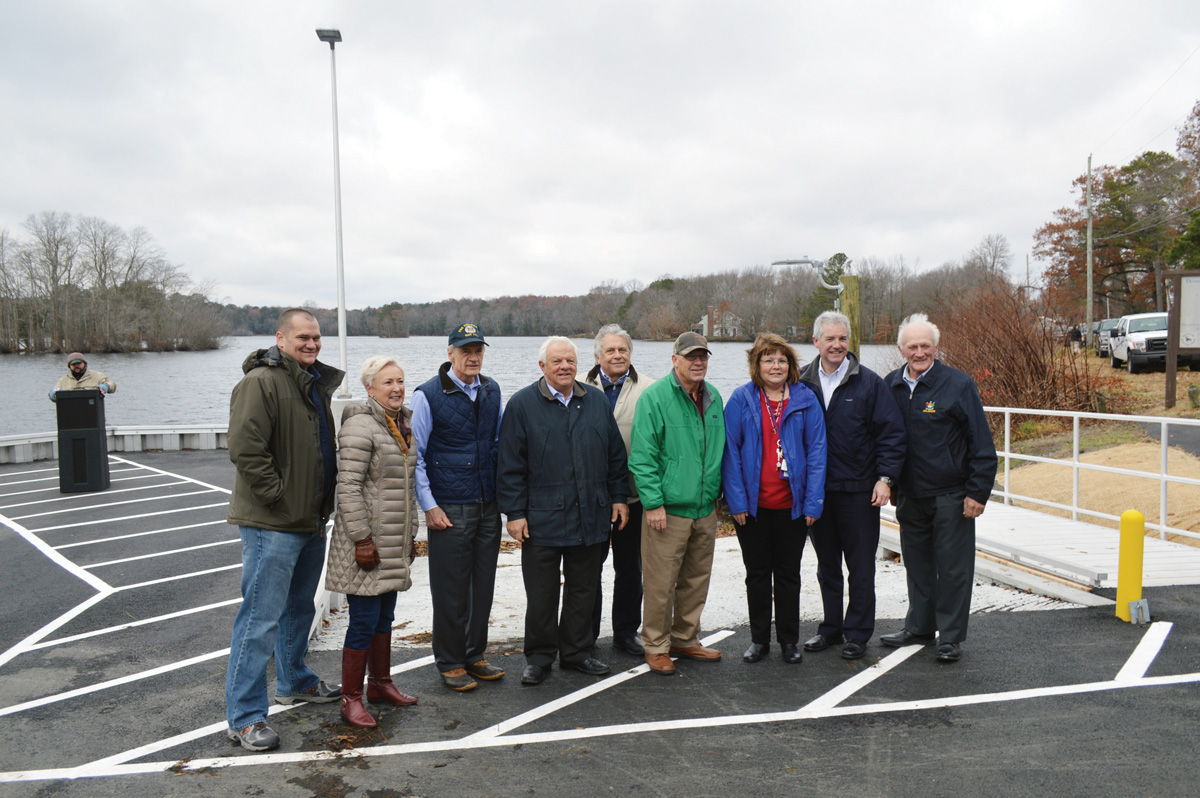 For years, anglers at Millsboro Pond have launched their boats into the quiet pond and then maneuvered their trucks back to parallel-park on the grassy shoulder of a very busy Route 30. Even DNREC Division of Fish & Wildlife’s website noted the meager parking availability.

But fishing and boating there will be a little easier and safer, now that the ribbon has been cut on a total reconstruction of the boat ramp; a new courtesy dock; expansion and repaving of the parking lot; and additional lighting around the site.

“Welcome to Millsboro’s best-kept secret,” said Mayor Michelle Truitt, whose children enjoyed school science classes there. She described the 101-acre Millsboro Pond, with its 4 miles of shoreline, as “a rare treasure that locals and tourists from around the state enjoy annually.”

“Millsboro Pond is very popular with largemouth-bass anglers and gets more use by anglers visiting Delaware than any other Division of Fish & Wildlife-maintained pond,” according to Delaware Department of Natural Resources & Environmental Control (DNREC). “The pond is also the second-most popular pond for bass tournaments.”

“The things we do impact everyone in Delaware and a whole heck of a lot of visitors,” said DNREC Secretary Shawn Garvin. “We’ve been making a lot of investments in our parks and public facilities.”

“With a facility this nice, people are going to find it,” said state Sen. Gerald Hocker Sr.

He favored a 2007 bill that increased fishing fees because the new Council on Recreational Fishing Funding would provide public input on funding projects.

“We’re just fortunate to have” seen many projects similar to Millsboro Pond, Hocker said. “Those that are paying for the fishing license can see the benefits of their money. What you need to realize is, if the State of Delaware didn’t pass this measure, the feds were,” and Delawareans could have had less control over the income, he said.

Many people were proud of the state-federal partnership that brought about the improvements. Of the $625,000 total cost, 75 percent was from the U.S. Fish & Wildlife Service, and the remainder came from Delaware fishing license fees. The four-month construction project began in July.

“Many times, you wanted to stop, but there was nowhere to park,” Briggs King said. “And now you have good parking, you have good lighting — the dock is phenomenal.”

Parking will be easier on the paved lot. The land was built out slightly to accommodate seven long parking spots (including one ADA-accessible spot) for vehicles and trailers.

Parking is free for all. However, people need a license or registration for all motorboats, fishing and crabbing in Delaware.

The pond mostly ranges from 2 to 6 or 7 feet deep. Officials also warned that people should also be cautious of the many stumps, which can damage outboard motors.

“This is the only public access point to the Millsboro Pond,” said Jeremy Ashe, construction manager. “Before the upgrades happened … this bulkhead wasn’t here, all this parking wasn’t here. So you could probably get two cars parked here, maybe. So, typically, people would park along the highway. That was one of the biggest reasons why we did the upgrade.”

The actual boat launch — first built in 1986 — is just outside of municipal limits, but the Town of Millsboro owns the narrow strip of land there.

Arguably, the town owes its roots to this pond, which was created by damming the Indian River’s western headwaters for a late-1700s grist mill. Development solidified around that point.

Fishing and boating licenses are only available online, at https://dnrec.alpha.delaware.gov/fish-wildlife, or at licensed retailers across Delaware.

For more information, contact the Fisheries Section of DNREC’s Division of Fish & Wildlife at (302) 739-9914, online at www.dnrec.delaware.gov/fw/fisheries/Pages/Fisheries.aspx or on Facebook at www.facebook.com/DelawareFishWildlife.