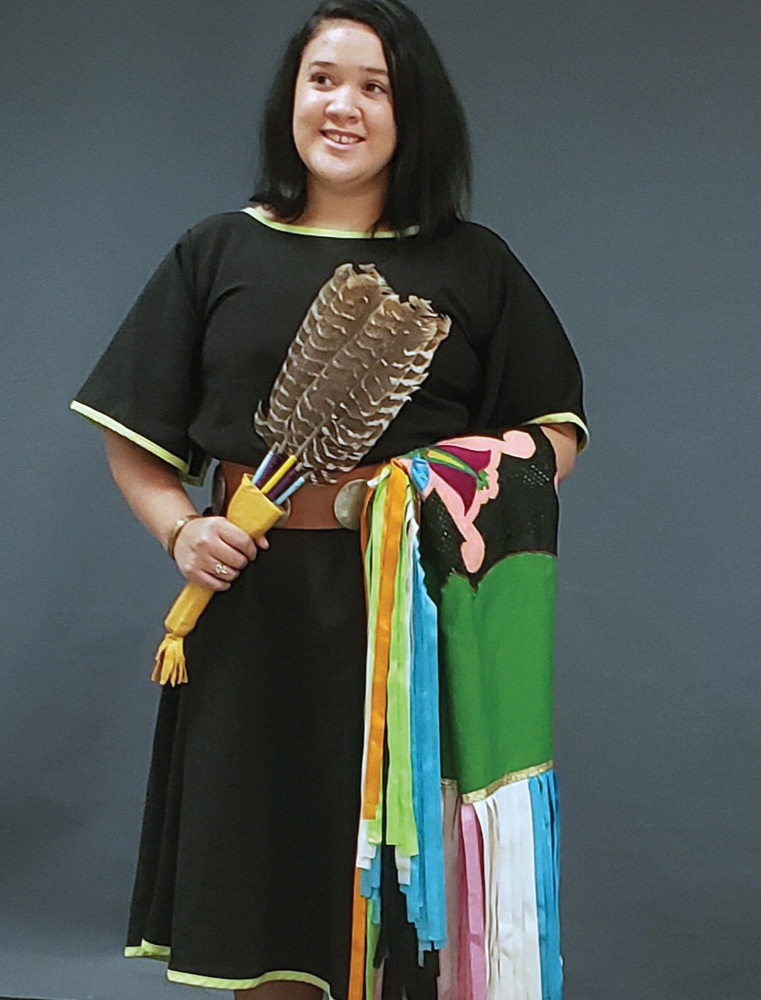 Nanticoke teen reflects on heritage ahead of Powwow

Being Native American is a way of life for Cheyenne Wright.

It is deep pride in the heritage passed from generation to generation, keeping traditions and honoring the Great Spirit.

“God gave us this earth, and we need to cherish it and everything in it. If you see a bug run across your foot, don’t kill it, because we all have value,” she said.

Wise words from a 17-year-old, but Wright, who will perform traditional dances at the Nanticoke Indian Tribe’s 42nd Annual Powwow this weekend, is proud to be Nanticoke and Lenape Indian.

Her brother is a drummer and her sister performs Fancy Dancing at powwows.

Wright is engaged in both Fancy and Traditional dancing, and started learning traditional dances “before I could walk,” she said.

“I was under a year old when my family was carrying me to powwows. I learned dances when I started walking — Traditional, then Jingle Dancing,” she said.

“We do performances, so when I was learning they would give me hints on what to do, when to spin, when to do certain things, but now I’m to the point where when we have certain dance practice, they will give me one of the kids who are learning to dance and I’ll teach them how to dance,” she said.

“There are certain things to remember. When you’re doing Traditional, I remember to always have great posture, stay on beat and do what I’m supposed to. For Fancy Dancing, I watch other people’s footsteps and try to do those. For the most part, it isn’t hard to learn,” she said.

Regalia is worn while dancing, or outfits — not costumes, as many people mistakenly call them.

“A costume is something you wear on Halloween,” Wright emphasized.

Both she and her sister make regalia.

“I sew a lot. I’ve made a bunch of regalia for other people. This year I’ve made five regalia — four for women and one for my nephew,” she said.

“As teenagers, we meet to keep our traditions alive. We have NDN Stix, our youth group. We all come together. We sit in a circle. We start by saying, ‘Peace,’ and then we say what we’re happy about and what we’re sad about, and at the end, we say, ‘Creator, please hear our prayers.’

“We normally go over Indian words of the week, so we learn what the words mean. We’ve learned what a sacred circle is. We’ve learned some songs. My aunt will teach us what a word means. We’ll repeat it, then we’ll come back the next week and have to say what it means, and we practice,” she said.

When she is a mother someday, Wright said, she will raise her children to respect their Native American tradition.

“They will be involved. Whether they dance or not will be completely on them, because I don’t feel it’s right to force your children to do something they don’t want to do. But this will be part of their heritage,” she said.

A bit of an admitted introvert who said she prefers a good book to being in a crowd, Wright has friends who are not Native American and said she is pleased “a lot of people see it as cool,” but she’s quick to correct misperceptions.

A teepee is a temporary shelter, but wigwams were used as more permanent dwellings.

Once, Wight had a disagreement with a teacher who warned students who were talking in class to “break up the powwow.”

She asked him about his choice of words and if that was his conception of a powwow.

“He said, ‘There is so much noise going on.’ He kept telling me I was wrong,” she said.

In another class, students were shown a video that Wright said depicted Native Americans as “people jumping around.”

“I was like, ‘That’s not what we do,” she said, denouncing it as bigoted.

“I asked if I could leave the room or if the teacher could turn off the video. … I got up. I walked down to the principal’s office, and I told the principal what happened. The Board of Education didn’t do anything. It was a racist video.

“It makes me a little angry that it’s 2019 and we still have a bunch of racism.”