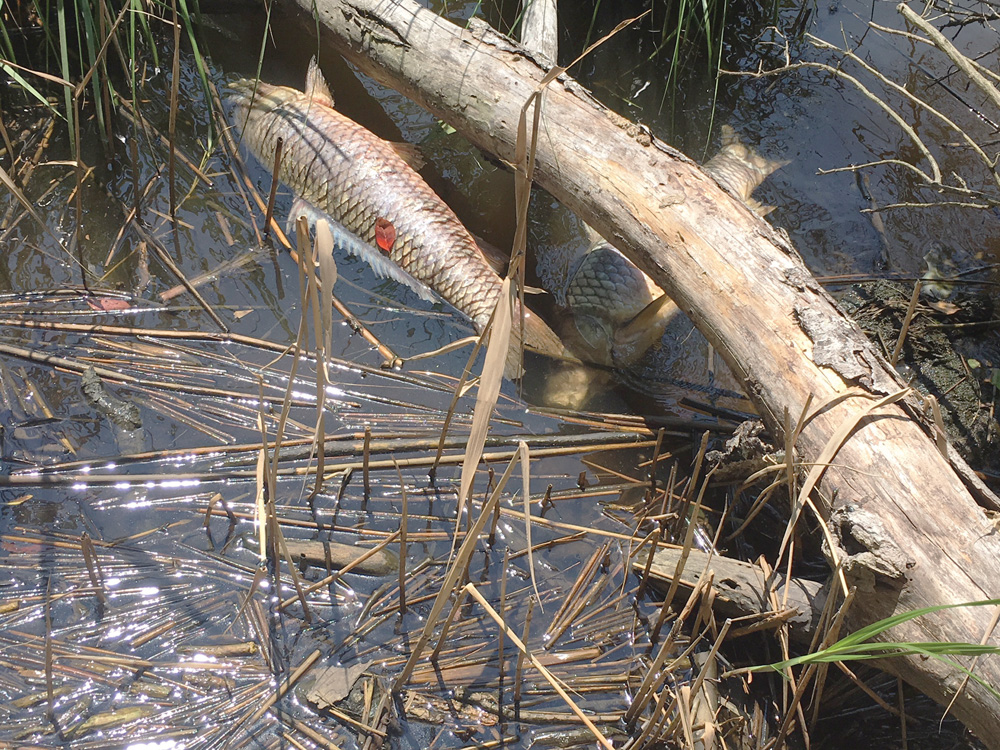 Anyone who notices a fish kill in Delaware waters is encouraged to immediately call the DNREC’s toll-free environmental hotline at 1-800-662-8802.

In Dirickson Creek, the carp can grow 2 feet long. That made for an unsettling scene when scores of dead fish were observed floating in a fish kill that happened on Independence Day weekend.

“This fish kill seems to be affecting only carp. The carp here are 2 feet long or so. They’re really large fish,” said resident Murray Oltman, who lives on Old Mill Bridge Road near Roxana and Frankford. “To have 2-foot-long fish carcasses along the banks is rather eerie.”

He and his wife, Tami, first noticed the fish kill along their waterfront property on Friday, July 5, and state wildlife scientists responded that day.

“Friday was when we started to see them,” Oltman said, “floating not only down the creek, but also against the banks of the creek. … There were still dozens and dozens floating” as of Sunday, he said.

The fish kill was observed near the western headwaters of Dirickson Creek, which flows eastward to the Little Assawoman Bay.

Scientists have not identified a specific cause for the fish kill. At any time, aquatic life could be affected by a virus or parasite localized to carp, or an environmental factor relating to dissolved oxygen levels or Delaware’s recent high air temperatures.

“There was no sign of other fish in the creek in dissolved-oxygen distress, and at this time no cause of the July 5 fish kill has been determined,” Globetti said.

“Years and years ago, there was a large fish kill with menhaden, but the best guess was [dissolved oxygen],” Oltman said.

They are a non-native species to Delaware waters. They’re typically reeled in at weights of 1 to 10 pounds. Omnivores, they will eat vegetation, crayfish and aquatic insects.

Anyone who notices a fish kill in Delaware waters is encouraged to immediately call the DNREC’s toll-free environmental hotline at 1-800-662-8802. Water conditions can change quickly, so if an incident is not reported quickly, determining what caused the fish kill becomes very difficult.