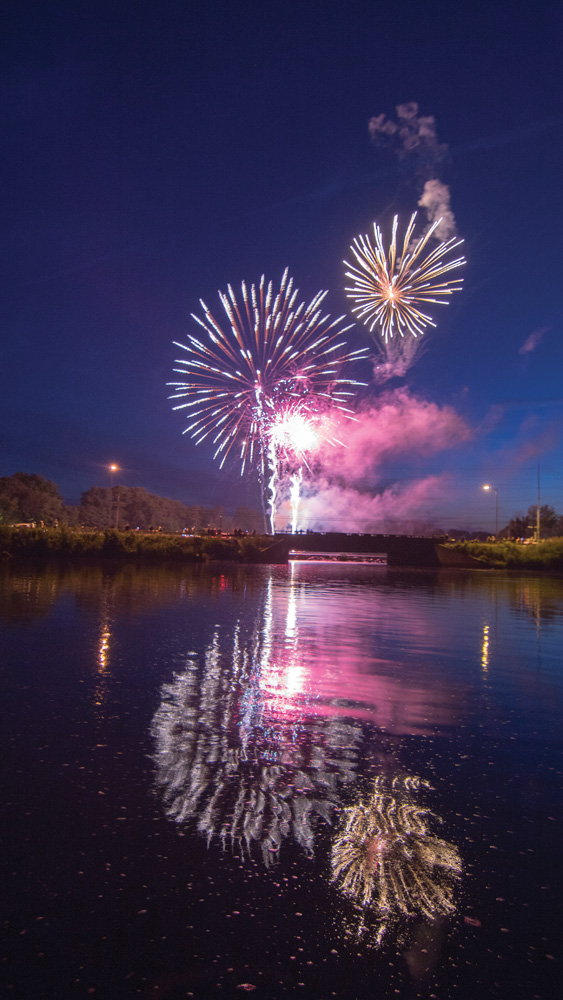 It’s time to break out the red, white and blue, and dig out that festive spirit, as the Fourth of July is less than a week away. And, to make it easy to hit all the festivities happening in coastal Delaware and its environs for Independence Day, here’s the lowdown on what’s planned throughout the area.

Bethany Beach’s Fourth of July events extend beyond the fireworks display, with events on July 4 and in the week surrounding it.

Athletes can kick off the Fourth of July week, before all the hotdog-eating contests and patriotic confections, with a 5K. On Sunday, June 30, Bethany Beach will host the Firecracker 5K Run/Walk, starting at the Bethany Beach bandstand at 7:30 a.m. All proceeds benefit the Town’s Fourth of July Parade Committee.

Registration for the event costs $30 and ends at midnight as June 29 becomes June 30. To sign up or for more information, visit https://runsignup.com/Race/DE/BethanyBeach/BBFirecracker5k.

About a week later, Bethany will have a slate of Fourth of July events to celebrate the nation’s birthday. Every year, the parade has a theme, and this year it is “Celebrating 35 years,” with float creators encouraged to depict a 35-year milestone of some sort in their design.

The day will start with the parade at noon, around downtown Bethany. Some featured bands during the parade are the Delmar District Pipe Band, the National Guard Army Band, Back Bay Strummers and The Honeycombs, as well as the Nautical Sounds chorus. At 7:15 p.m. on the bandstand, there will be an awards ceremony for the parade floats, based on the 35-year theme, followed by a concert by Jimi Smooth & the Hit Band.

To end the night, Bethany will put on a fireworks display around dusk, off the beach downtown.

Kicking off the week’s fireworks displays, Millsboro and the Greater Millsboro Chamber of Commerce will host the town’s third annual Stars & Stripes Fireworks Celebration in Cupola Park on Saturday, June 29, from 6 to 9:45 p.m., with the fireworks set to go off around 9:30 p.m. There will also be food trucks and music in downtown Millsboro starting at 6 p.m.

Attendees of Stars & Stripes are being encouraged to bring their own chairs to enjoy a fun-filled evening. (In the event of a weather-related cancelation, the show has a rain date of Sunday, June 30, at the same times.)

Highway One Companies (owners of the Rudder, Northbeach, Cork, Ivy, Hotel Dewey, Dewey Liquors and Jimmy’s) are bringing free fireworks to Dewey Beach on July 4. As in the past, the fireworks will be on Rehoboth Bay, in front of Northbeach/Ivy and two blocks from the Rusty Rudder. Zambelli Fireworks International will again be handling the fireworks display, from a barge set out about 200 yards into Rehoboth Bay.

Entertainment that night will be provided by Go Go Gadjet at Northbeach and Laura Lea & Trip Fabulous at the Rusty Rudder.

The City of Rehoboth Beach Fireworks will take place a day early, on July 3, around 9:30 p.m., also being provided by Zambelli Fireworks. The fireworks in Rehoboth will be launched from the beach south of Rehoboth Avenue, and should visible up and down the boardwalk and beach. Organizers urged those planning to watch the show to be in town early, due to traffic and other concerns. Depending on the weather, they said, the fireworks may be launched any time after 8 p.m.

On the Rehoboth Beach Bandstand on July 3, entertainment will be provided by The Funsters from 8 to 9:15 p.m., before the fireworks, and then again until 11 p.m., following the fireworks. For event information, visit rehobothbandstand.com.

Neighboring Lewes will host fireworks and other Independence Day features on July 4, with the fireworks set for dusk off Lewes Beach. (For more information on the fireworks display, including viewing locations, traffic restrictions and more, go to https://gofourthlewes.org/2019-fireworks.)

The Lewes Old Fashioned Fourth of July Celebration will run all day on July 4, from 9 a.m. to 10 p.m. Visitors can watch the Boat Parade along the Lewes-Rehoboth Canal and the Doo-Dah Parade on Kings Highway/Savannah Road/Second Street, and enjoy old-fashioned games for kids, followed by the fireworks show.

The community of Ocean Pines, Md., will host a special fireworks display sponsored by the Ocean Pines Association on July 4 at a new location at Veterans Memorial Park at 11144 Cathell Road. The show will begin shortly after dark, around 9:15 p.m. Parking will be available in the lots around the park. The rain date is July 5.