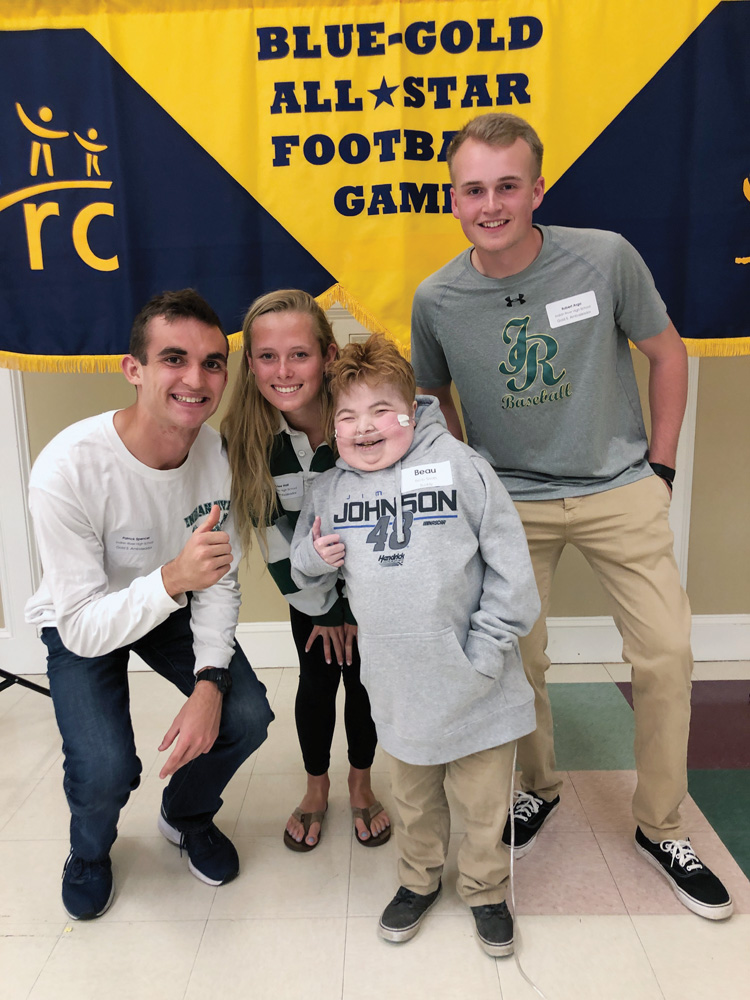 Blue-Gold game about more than football

The 64th Annual DFRC Blue-Gold All-Star Football Game is an annual showcase for high school seniors that allows them to don their respective schools’ football helmets for one last time.

However, the game is not just about the play on the field. There are others who are involved, from cheerleaders and band members to Senior and Junior Ambassadors for the annual affair.

And Indian River High School will be well-represented as a whole for all the festivities.

“The Blue-Gold is such a great organization, and I am extremely grateful for being a part of it,” Hall said. “We have a ‘buddy’ named Beau who makes this opportunity so special.”

The “buddy” that Hall talked about is a part of the Hand-in-Hand Program that is associated with the Blue-Gold game. Started back in 1974, the program was created as a way to “help educate the high school participants about intellectual disABILITIES and lend greater meaning to the game experience.”

For Argo, the Blue-Gold experience — his second in a row — is an experience of a lifetime.

“Being a part of the Blue-Gold game is such an eye-opening experience,” the recent IR grad said. “It has allowed me to befriend people who I never thought I would. It has taught me so much about life, and I am truly honored to be chosen as an Ambassador two years in a row.”

It was a first-time opportunity for IR’s T.J. Moore as a Junior Amabassador this year. Like Hall, Argo and Spencer, Moore was a participant with the “buddy” program and spent time with Beau Smith.

“It is such a privilege and an honor to able to spend time with our buddy,” said Moore. “The experiences we have had have been so much fun.”

The Blue-Gold game will be played Friday, June 21, at Tubby Raymond Field on the campus of the University of Delaware. Gates will open at 5 p.m., with opening ceremonies commencing at 6 p.m. The kickoff for the game is scheduled for 7 p.m.

IR’s Zach Schultz will be playing in the contest, and will wear No. 55 for the Gold team.

Tickets for the game cost $10 for general admission, with kids 18 or younger paying $8. There is also a $5-per-car fee for parking. Tailgating is permitted, but those individuals must follow University of Delaware and City of Newark rules.

Proceeds from the annual contest go directly to fund programs to help people of all ages with intellectual disABILITIES in Delaware. Distributing grants since 1956, the DFRC broke the $6 million mark in 2015 in funding programs throughout the state.

The DFRC is a 501(c)(3) charitable organization that was established in 1956. Their mission is: “to enrich the lives of Delawareans with intellectual disABILITIES. It is dedicated to raising funds and consciousness through events, such as the Blue-Gold game, that support enrichment programs so that “all Delawareans with intellectual disABILITIES can maximize their potential, independence, and enjoyment of life.”