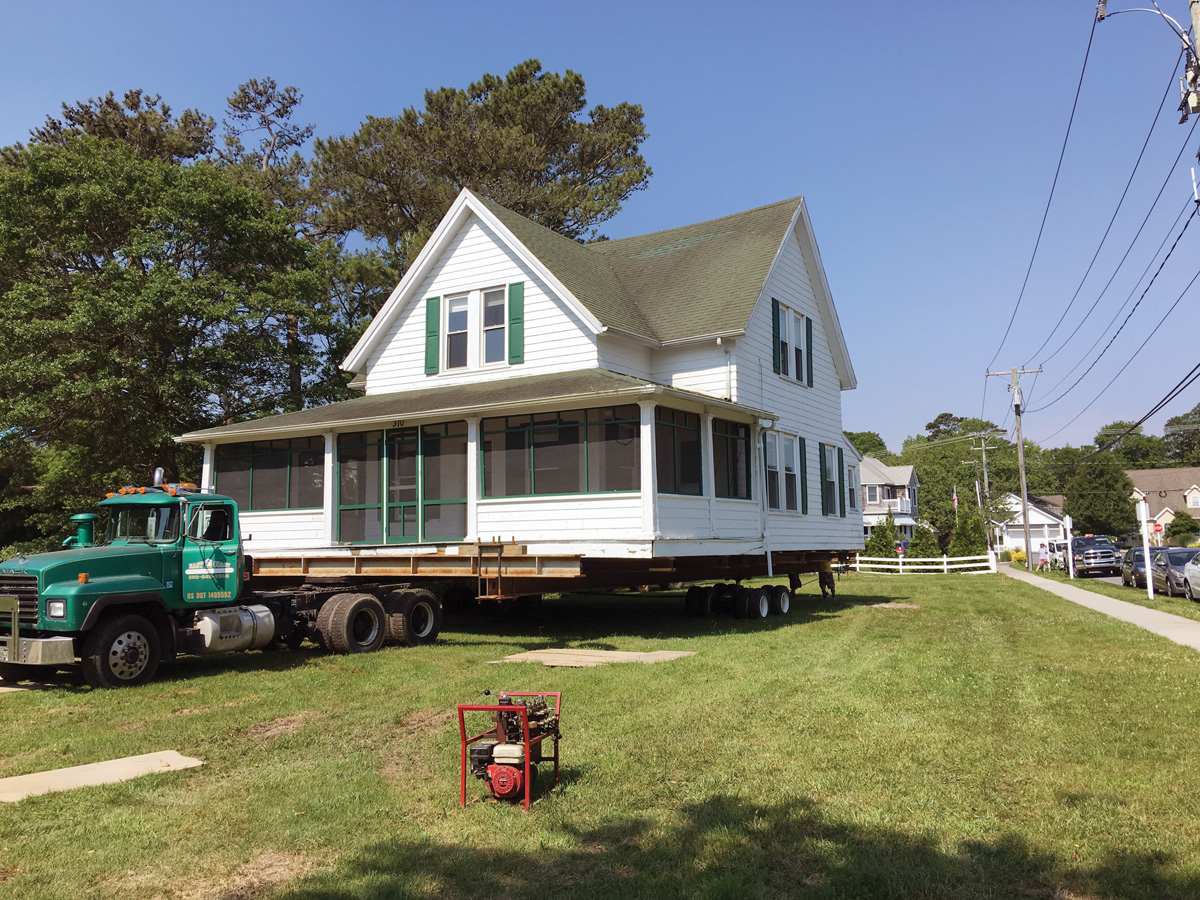 Public could get peek inside historic cottage this summer

Sometimes history takes a little while to percolate. That’s the case for the new Bethany Beach museum, which is now slated for its full opening around Memorial Day of 2020 — though the public could get a peek inside this summer as the structure gets ready for its transformation.

Bethany Beach Cultural & Historical Affairs Committee Chairwoman Carol Olmstead this week provided an update to the Bethany Beach Town Council on the status of the Dinker-Irvin Museum, which will be housed in the historical home donated to the Town in 2016 and moved to a nearby location on Town-owned property last year.

With the 1903-era house moved to its new location on Garfield Parkway Ext. last June, the recent months have focused on repairs to and reconstruction of portions of the former town post office, which was one of the six original houses built in the town by its founding families — in this case, the Dinkers.

Olmstead said at the April 15 council workshop that most of that repair work has now been completed, with the home’s exterior restored to resemble it as it appeared in the early 1920s, after it had been moved from 1st Street to Garfield Parkway and while it served as the post office.

An old photograph of the cottage, complete with post-office signage, has been the guideline for the work.

“The Town searched high and low to find it, so it would be the same as when it was placed on Garfield in 1911,” Olmstead said.

The work by Miranda & Hardt has included a new rock-face block foundation, restored porch railings (the home had a wrap-around porch at one point in more recent times) and removal of the green shutters that were also a later addition. (The shutters are now in storage, in case they should be wanted in the future, she noted.)

While the work on the house has been in progress, CHAC’s work on what will eventually fill the house has also been ongoing. The group initially focused on researching the information needed to place the structure on the National Register of Historic Homes, which they successfully did last year. Olmstead said the cottage qualified under the Register’s “Criterion C,” under which it was designated as a “rare example of early 1900s beach cottage.”

It subsequently was purchased by the Irvin family, who owned it for more than 90 years before Irvin descendent Christina Edgar and her husband, Clem, donated it to the Town. As a result, the cottage is now officially known as the Dinker-Irvin Cottage — a name that will remain in its new role as a museum of town history.

“It had to be Dinker-Irvin, and we were happy to do that,” Olmstead noted of the moniker.

A vision of the future’s past

CHAC has also been working with museum designer Elaine Fay (www.e-lanestudio.com) after selecting her to design the new museum. Olmstead said the group had visited a number of local museums and had been most impressed with one in Lewes that Faye had helped design. (Faye has also designed exhibits for the Ocean City Life-Saving Station Museum in Maryland and the Rehoboth Beach Museum.)

Faye’s job will be to take the content — written, photographic and more — provided by CHAC and turn it into a series of mural-style displays that will adorn the walls of the historic cottage.

“There isn’t a lot of floor space,” Olmstead noted of the home, considering that there are plans to include some period furniture in the museum when it is completed, so the information will primarily be in displays on the walls.

She said the plan is to not use any of the existing mural boards from the museum space in the town hall lobby, but to create all new displays, while also using some of the artifacts that have been on display at town hall, as well as others that have been in storage and some that have been and are still being donated by the public.

The town hall museum, she said, will be focused as a museum about the Town of Bethany Beach and will feature revolving exhibits, such as those one the history of the Town’s lifeguards, the Fourth of July in Bethany, and more.

Meanwhile, the Dinker-Irvin museum will focus on early life in the town, which was founded in 1901 as part of a Disciples of Christ (Christian Church) summer religious retreat, and later incorporated by a group of six Pittsburgh men who all built summer cottages there.

Olmstead said the idea is to keep the cottage “as original as possible, as a museum and as a historic home in Bethany Beach.” That vision is being guided by a mission statement and interpretive goals the committee has developed under Faye’s direction.

“We have the information on Mr. Dinker and his family, but we don’t know how to put it together,” she said of the part of the job they’re relying upon Faye to do. “CHAC does most of the work, creating the text and coming up with photos and artifacts, and we present to her and she puts it together,” she explained.

The vision of the Dinker-Irvin museum is that visitors will enter up the main, front stairs, with parking being on Garfield Parkway Ext., but some room in the back for docents to enter away from the main entrance.

Olmstead said each of the rooms in the home will be themed to some aspect of early life in the town. The dining room, for instance, will focus on the early 1900s Chautaqua movement as a framework for the Christian Church, in which group activities, such as summer retreats, were designed as a way of creating a sense of community in a church congregation. It will also house period furniture and dishwear.

The front porch will use porch furniture “to relate the importance of porches at the beach,” with displays on early travel to Bethany and the building of the Loop Canal, and with the inside porch becoming a re-creation of the Bethany post office circa 1922, including postcards and early Post Office history, and a possible gift shop.

Olmstead noted that the cottage is the oldest “public” building in Bethany Beach, since it was once used as the post office. She said the committee had been in touch with the U.S. Postal Service to gather information on the history of mail delivery in the early 1900s, including local post office locations during the period and reflecting that the Star Route took three to four hours a day to deliver mail from Bethany to Dagsboro via horse and buggy.

The living room will feature some early 1900s furnishings, as well as displays on the role of William A. Dinker and others in Bethany’s beginnings and a history of the Irvin family’s ownership.

Olmstead noted that, entirely coincidentally, the day in 2016 that the Town accepted the Edgars’ donation of the cottage, a woman was visiting Bethany Beach and had seen an article on the donation in the newspaper. The woman, she said, realized, to her surprise, that the William Dinker who had owned the home was her great-grandfather. She has subsequently supplied a photograph of him to the committee, as well as other information.

“Tina Edgar has joined CHAC,” Olmstead added, “and she and her husband have been very helpful with information on the house. They have all deeds, and they’re giving them to us. And she has created an entire library of the history of the house, her family and Bethany Beach, including photos we don’t have.” She noted that Clem Edgar gathered information from the USPS.

Elsewhere in the museum, the kitchen and pantry will be focused on early food sources, preparation and possibly some recipes, portraying the cottage’s use as an early Bethany home, with a wood-burning stove and refurbished icebox. The enclosed back porch will be themed to the beach and beach safety, such as beach attire, the lifeguard station and lifeguard service, as well as the beach and boardwalk.

Olmstead said there are no immediate plans to develop exhibits on the home’s second floor, but eventual themes for several rooms up there have been developed, including a “children’s room,” featuring period furniture, toys, photos and artwork; a room featuring other stories and a “reading room” with books on the town, plus the existing scrapbooks of news articles and Bethany memorabilia. One small room on the second floor will be utilized as an office and storage area.

More than a year of work ahead

Olmstead said the current timetable has the museum not being finished and ready to open to the public until Memorial Day of 2020. The plan is for the group to continue to gather information until September, with production of the museum displays to take place through the spring of 2020 and the displays to be installed in May 2020.

“Do we want to wait a whole year before presenting the house to the public?” was the question Olmstead said the committee had asked. Looking to the Coastal Towns Museum being developed in Ocean View by the Ocean View Historical Society the help of CHAC and other local historical groups, she said, the idea had been that the Dinker-Irvin museum should be showcased sooner than 2020, if only to give people a hint of what is to come.

With that in mind, she said, the plan is to create some temporary displays that will indicate what sort of displays will eventually be there and to open the house this summer, “on a very limited basis,” for perhaps a day or two a week, for just a few hours. (There will be no furniture or other artifacts on display this summer, she said.)

Olmstead said the estimated date for the brief pre-development public openings for the cottage is in July.

“It’s going to take so long because it’s going to be first-class,” Olmstead emphasized of the overall plan for the museum.

She estimated the cost of developing the museum to be around $100,000 to $150,000, which is already set to be funded through a designated budget line item in the Town budget, under which CHAC has contributed some funding raised by its annual Bethany Beach Seaside Craft Show each June. CHAC has already contributed $75,000 for the project, including more than $40,000 that went to the structure’s move to Town property.

“When we complete the park, I imagine there will be a lot of interest back and forth,” Mayor Lew Killmer said of the progress on the Central Park project across Garfield Parkway from the cottage.

“This is an important part of our history,” she emphasized. “When you think about the six homes of the people who helped found Bethany, there are only two left.”

Resident Tracy Mulligan called the project “an extraordinary effort of competence and a labor of love.” He asked whether any fundraising from the community had been considered. “There’s been a lot of enthusiasm in the town. Are there any ways to channel that enthusiasm?”

Town Manager Cliff Graviet said the way to do that would be through a “Friends”-type group, which could fundraise and support the museum without the restrictions that would be put on official fundraising by the Town. Currently, the project is only being supported by the Town and its committee.