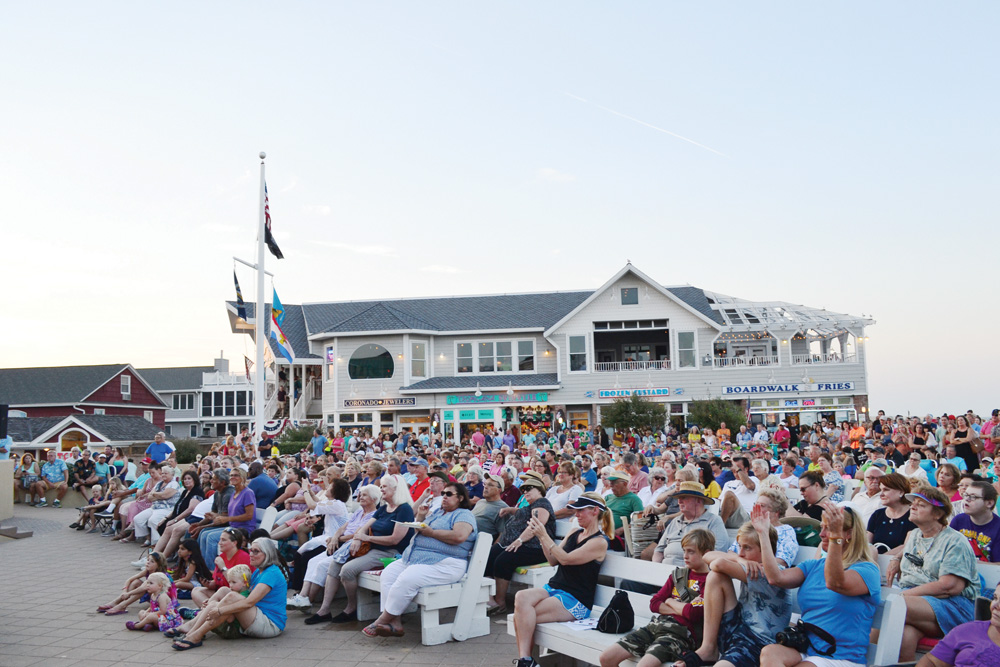 The 2019 lineup will introduce 15 acts completely new to the Bethany stage.

“Our audiences really appreciate a variety of music,” said Julie Malewski, events director. “Even though they have their favorite genres, most are willing to try something new.”

The series, she said, gives a nod to feedback received from the annual audience participation survey.

This August marks the 50th anniversary of Woodstock. The Janglebachs will make their bandstand debut on Aug. 9, performing the music of the Woodstock generation, and melding the music and fashion that shaped the ’60s.

Also, in August of 2018, the world lost Aretha Franklin. The Uptown Band will include a mini tribute to “the Queen of Soul” in their show on Aug. 11. (This was one of the bands that was rained out last season, Malewski noted, adding that they have a varied set list and mix of lead vocalists that reaches a younger audience.) Also performing soul and R&B is Leroy Hawkes & the Hipnotics. The group has been around for almost 10 years, but 2019 will be their debut in Bethany Beach.

Two heavyweights in the music business have been diagnosed with Parkinson’s disease, limiting their ability to tour: Neil Diamond and Linda Ronstadt. Both singers will be honored in professional tributes by Real Diamond (another group rained out last year) and newcomer Ronstadt Revue, whose show has the backing of former Ronstadt bandmates.

And, in recognition of the resurgence of boy-band vocal groups, two acts will appeal to Baby Boomers and beyond. Lights Out will debut their tribute to Frankie Valli & the Four Seasons on Father’s Day. Later in the season, the award-winning ’90s group As If will revisit favorite songs that shaped the millennial generation, from boy-bands and girl-bands to pop, punk and hip-hop.

The Town’s celebration of Périers Day falls within the Summer Concert Series again this year. The annual event, which marks the twinning of the towns of Bethany Beach and Périers, France, will feature USO tribute act The Delmarvalous Dolls on Saturday, July 27, and French Quarter-inspired creole dance band Zydeco-A-Go-Go the following day.

True to form for the bandstand, every weekend will feature an eclectic mix of rock to country to jazz and anything in between, sometimes even on the same night. Two examples of this are new to the roster: The 19th Street Band fuses Americana, country and rock into a show that has shared the stage with stars including Rodney Atkins and Crag Morgan. Cello Fury offers a mix of classic symphonic sounds and driving rock beats that delivers a progressive indie sound.

The child-friendly Kids Club will return in July. Along with Carnival Night and Children’s Theater, Kidsinger Jim and the Big Barn Puppets is scheduled to bring the puppet musical back, this time with an anti-bullying show, “Kindness Rocks!” (Note, this show will get an early start, of 6 p.m., to accommodate the younger viewers.)

Twice Removed is a new addition to the lineup. The teen rock band is made up of former students from the Southern Delaware School of the Arts and is geared toward tweens and teens.

The Summer Concert Series will follow two other annual events that will kick off the 2019 summer season. The Poseidon Festival will run on Memorial Day weekend from May 24 through May 27, and feature island-inspired entertainment. The Seaside Craft Show takes place on June 1 and will host fine-craft vendors and music by jazz duo Notes on the Beach.

All shows are free and sponsored by the Town of Bethany Beach. Bonfires and movies begin the week of June 17. For complete details, visit www.townofbethanybeach.com, under Activities.