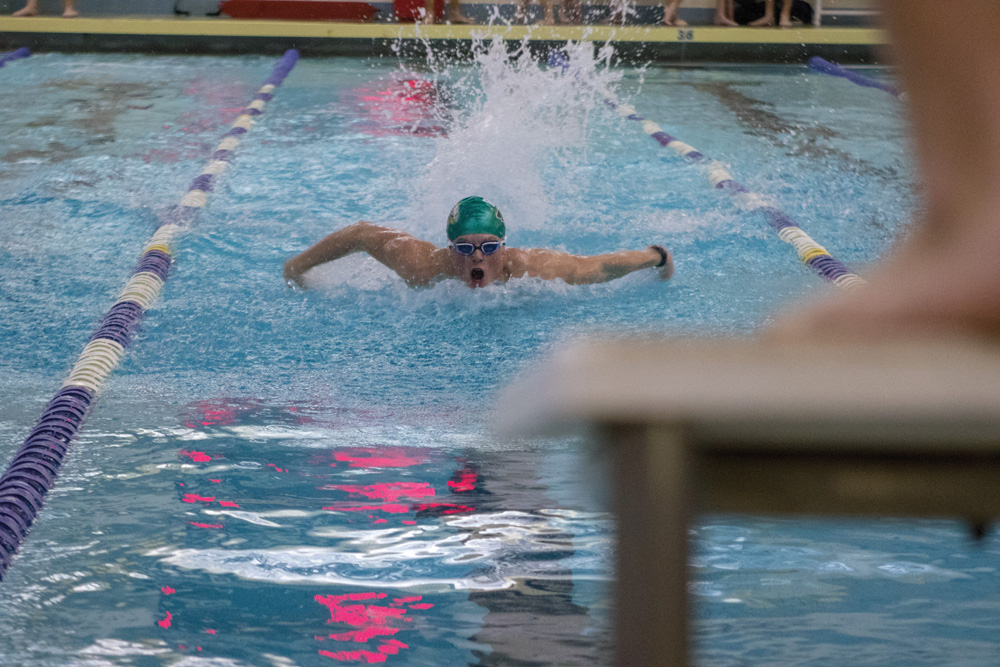 For the boys, IR finished fourth, with 282.5 points, while the girls came in sixth with their 111 points.

Sussex Tech took home the boys’ title with a winning 326.5 points, and Cape Henlopen came away with the girls’ crown thanks to their 410 points. Caesar Rodney’s Danielle Stewart and Nick Hartmann each were awarded the Outstanding Swimmer awards for the meet.

The conference also recognized this year’s Coaches of the Year, and Indian River boys’ coach Colin Crandell, along with Sussex Academy’s girls’ coach Tom Martiner, were honored with those awards.

“It’s always an honor to be recognized by your peers, but any coach will tell you — we don’t earn this award alone, we have lots of help,” Crandell said of his honor. ”I’d like to share this award with [assistant coaches] Donna Smith, Cathy Gallagher and Dana Schaeffer, all of whom contributed to the team success. I was truly surprised by the award, since I see so many deserving coaches in our conference.”

Overall, the boys qualified nine swimmers, while the girls will be sending six, for the DIAA State Championship meet. Qualifying swims for the finals will be on Wednesday, Feb. 20, (girls), and Thursday, Feb. 21, (boys), before the championship finals take place on Saturday, Feb. 23.

Senior Michael Barnes broke the IR team record in the 50 freestyle with a time of 22.33. In the process, he picked up two second-place finishes, in the 50 and 100 freestyle events.

Barnes was also a part of the winning 200 freestyle relay team, with Mitch McGee, Max Kohr and Will Douds, which also took down the IR team record with their time of 1:31.50.

And it became a trifecta of record-breaking efforts for Barnes as he joined McGee, Kohr and Declan Burke to shatter a long-standing team record in the 400 free relay, while finishing second overall in the meet, with their time of 3:22.53. They were edged out by 0.2 seconds by Sussex Tech.

Burke came away with a second-place finish in the 200 free, just ahead of teammate McGee. Burke also picked up a fourth place in the 500 free. McGee was also third in the 100 fly.

“I was amazed and stunned at how well they swam, and how mentally prepared they approached the meet,” Crandell said of his boys’ competitors. “All their hard work paid off, and it was a pleasure to watch them bloom at the right moment. It was certainly one of my most memorable meets as a coach. My jaw dropped so many times — I was simply in awe. It was a great team effort, and IR was well-represented in the meet.”

Other notable performances from the IR boys included:

• Burke, Douds, Dylan Tuttle and Ethan Forrey were sixth in the 200 medley relay.

• Kohr and Douds each turned in Top 10 efforts in the 50 free event, with their sixth- and eighth-place finishes, respectively.

• Zach Lingenfelter was 10th in the 500 freestyle.

• Tuttle was third in the 100 breaststroke, while Lian Adkins was 10th.

Over on the girls’ side of things, the Indians’ youth certainly turned in a strong performance, with sophomore Emma Barthelmess having the best finish overall, with a third place in the 100 breaststroke event.

Barthelmess also turned in a Top 10 finish in the 50 free with a 27.02, which was good enough for eighth place. The time was more than a full second better than her seed time. Alex Hall was 15th in the same event.

The quartet of Barthelmess, Hall, Emma Kelly and Amber Hills came away with a sixth-place finish in the 200 medley relay.

Other notable performances from the IR girls included:

• Hall, Hills, Barthelmess and Kaitlyn Kreiser joined forces for a sixth-place finish in the 200 free relay.

• Hills, Kreiser, Czycewski and Kelly were sixth in the 400 free relay.

“We’re so proud of the boys and girls,” said IR girls coach Dana Schaefer. “It’s really incredible what they’ve been able to do with such limited pool time.

“We share a pool with Sussex Central a few days a week at Howard T. Ennis School, when there isn’t a swim meet or pool closure there; then renting the Sea Colony Fitness Center, and being packed eight [swimmers] to a lane in the five-lane pool. They were doing dry-land exercises to make up for the hours when we can’t get into a pool.

“Colin Crandell is simply a swim-training genius, and he’s so modest about it,” she added of the team’s success despite the limited pool access.

So now the 15 swimmers that have qualified for the state meet will spend their time continuing to train in preparation for their biggest meet of the year — the season finale — at the University of Delaware.