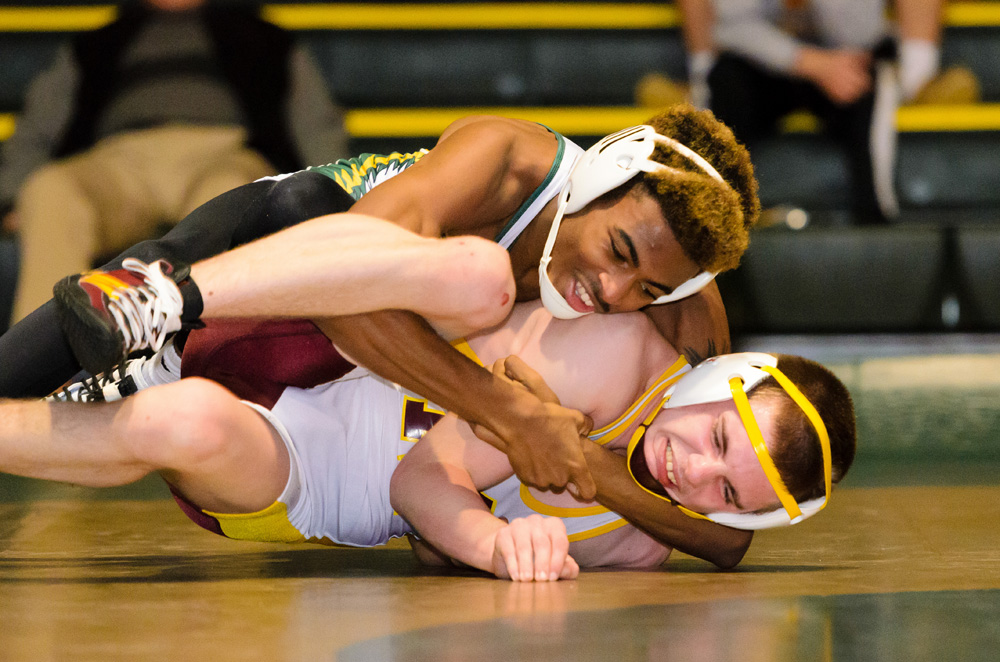 The Indian River-Sussex Central high school rivalry continued on Saturday, Feb. 2, in a matinee contest inside the Golden Knights’ gymnasium.

An injury-depleted IR had jumped out to an initial 21-0 lead, but Central recovered through the middle weights, en route to a convincing 42-30 decision in the Henlopen Conference divisional crossover match.

“We knew coming into this match that it was going to hinge on bonus points at some pivotal weight classes, and we left some points out there that would have changed the outcome of the match,” head coach Jeff Windish said. “We were able to get most of the wins we were counting on but let one or two of the ‘swing matches’ get away. In a tight dual, you can’t allow that to happen.”

The Indians got things rolling early at 106 pounds, with Chris Saylor decking Central’s Gunnar Abbott at the 3:36 mark.

IR’s Ian Shaubach followed that up with a technical fall over Dylan King at 113 pounds. Shaubach made it look easy with his 16-0 score, getting the stoppage at 5:44.

Will Rayne continued the Indians’ early efforts with a 14-4 major decision over Central’s Mason Ankrom, to make it 15-0 IR.

It became a four-pack of wins for IR when Ta’Jon Knight got the slap over the Knights’ Tyler Hudson at 2:25 in their 126-pound contest, to make it 21-0.

That early success came to a crashing halt, though, when the Indians’ middleweights struggled.

The Golden Knights ran off eight straight wins, including six by pin-fall, to erase their deficit and build an insurmountable 36-21 lead.

IR’s Zach Schultz picked up a pin at 220, over Central’s Hiram Lasher at the 3:01 mark, and Ramond Turner closed out the match with a 7-3 decision over Tyler Farr at 285, for the final verdict.

Meanwhile, at 285, “Ramond Turner getting a solid 7-3 win over Tyler Karr was a great way to end the match, and an important individual match-up for seeding at conferences.”

The Indians — sitting at 13-4 on the season — were scheduled for a non-league contest with Middletown on Monday, Feb. 4, but that match was canceled.

On Wednesday, Feb. 6, after Coastal Point press time, IR was set to host Delmar for Senior Night, in their final dual meet of the regular season. Results of that contest will be available on the Coastal Point sports Facebook and Twitter pages.

“The seniors are excited for Senior Night on Wednesday against Delmar,” concluded Windish. “It’ll be their last chance to wrestle in their home gym, and I know they’ll be pumped up for that match.”