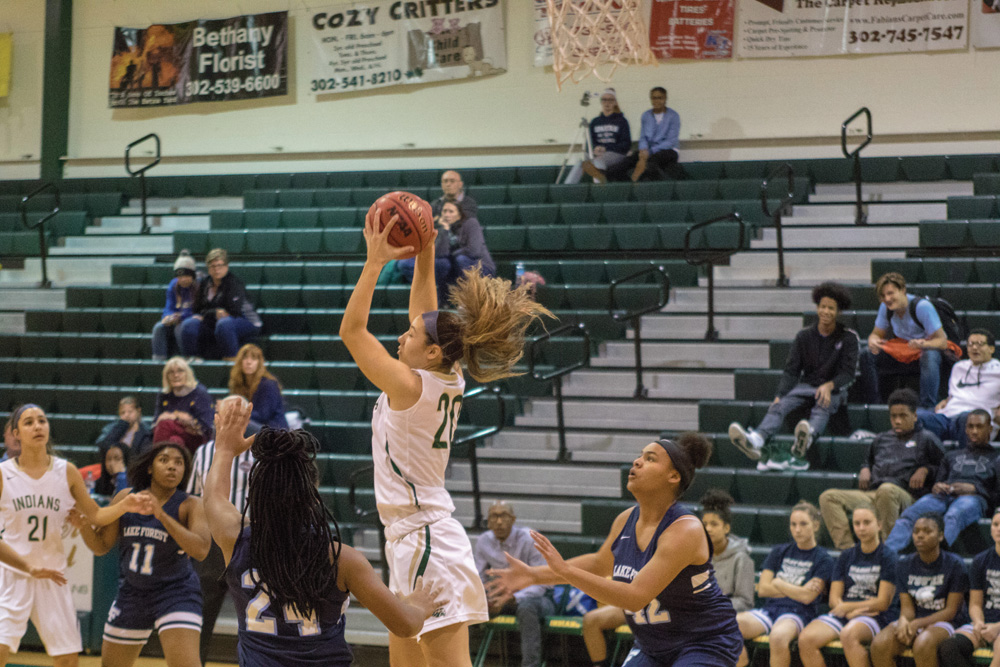 The Indian River High School girls’ basketball team has become quite the cohesive unit during the second half of the 2018-2019 campaign. Since the holiday break, the Indians are playing above .500.

That impressive play has them in prime position to erase the struggles from early in the season and finish the season with double-digit wins for just the second time in the past six years.

On Tuesday, Feb. 5, the Indians once again played strong defense, and generated enough points to come away with a 35-27 win over host Delmar.

“We switched to a man defense in the second half, and it helped pick up our energy,” head coach Paul Weisengoff said after the game. “Lauren [Meehan] locked down [Delmar’s] three-point threat, but it truly was a team effort.

“It certainly helps to have Julia as our rim-protector, and when other teams see her waiting in the paint, they are reluctant to challenge her. So, it does not always result in a block, but it’s the same result.”

Wise has certainly started to come into her own since the holiday break, and Weisengoff was quick to praise the junior, as well as sophomore Lauren Meehan.

“Yonya Wise has really come on strong the last few weeks,” Weisengoff said. “She always has a tough defensive assignment and has become a scorer for us.

“People might look at the box score [Tuesday night], and see Lauren with no points and think she didn’t have a good game. But, make no mistake, we don’t win without her. She did a really good job on the defensive end, and when they went to a man defense, she ran our spread offense with poise and composure. I am just so proud of this whole team.”

The win brings the IR girls’ team’s record to 8-10 on the season, with the two games remaining. They were set to host Sussex Academy on Thursday, Feb. 7, after Coastal Point press time, in what is also Sennior Night for the Indians. Back on Jan. 3, IR defeated the Seahawks, 40-18.

They will close out the season on the road at Milford on Tuesday, Feb. 12.

On Jan. 31, it was a fast-paced, back-and-forth high school boys’ basketball game that featured plenty of action — certainly enjoyable for those in attendance.

And through three quarters of action, the Indian River and Delmar squads were all locked up at 49-49. Unfortunately for the host Indians, offensive struggles proved to be too much to overcome, resulting in their 72-62 loss to the Wildcats.

A trio of seniors led the Indians’ offense, with Jamier Felton scoring a team-high 18 points, while Antonio Jones chipped in with 15 and Michael Meehan added 13 markers.

The Indians — sitting 6-12 overall on the season — were set to close out the 2018-2019 campaign with a game at Sussex Academy on Thursday, Feb. 7, (after Coastal Point press time), before returning home for Senior Night against Milford on Tuesday, Feb. 12. IR defeated Sussex Academy 69-31 the first time the teams met this season, back on Jan. 3.