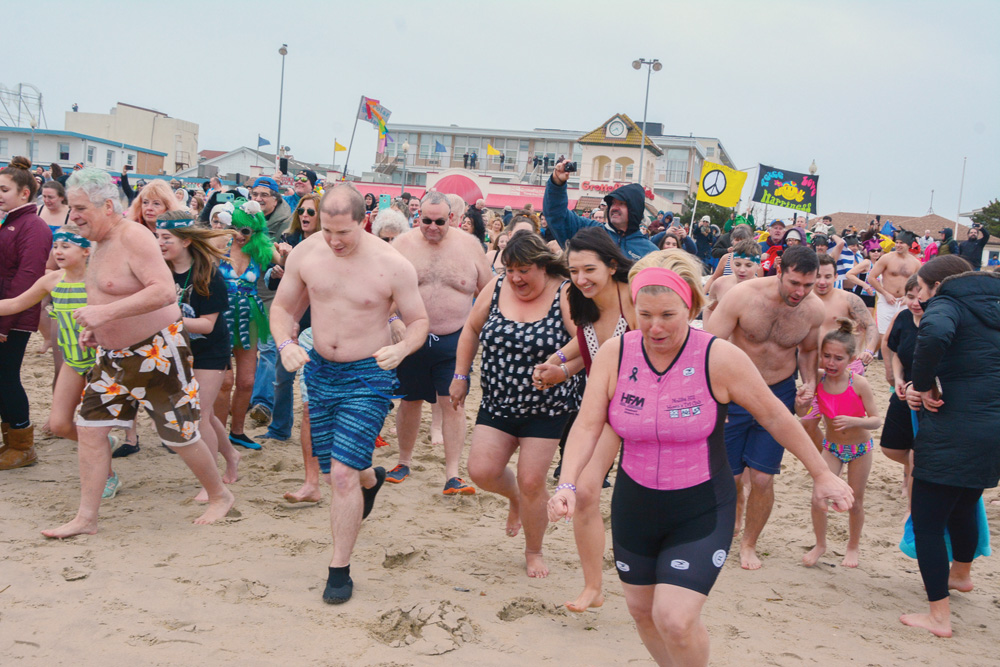 Those who missed taking a dive into the frigid ocean on New Year’s Day have another opportunity to take the plunge for a good cause.

The 28th Annual Lewes Polar Bear Plunge in support of Special Olympics Delaware (SODE) will be held on Sunday, Feb. 3, at 1 p.m. by the Rehoboth Beach bandstand.

“We thought that was a great opportunity to raise a quick few thousand dollars during a one-day event,” said Jon Buzby, director of Media Relations & Program Innovations for Special Olympics Delaware. “That first year, we only had 78 people raise $7,000 at Cape Henlopen State Park. We thought that was a great event. We had no idea back then that it would turn into what it is today.”

Buzby said that when the plunge first began in 1992, it was run in conjunction with the Lewes Polar Bear Club, and was not the same day as the Super Bowl.

“The Super Bowl Sunday picked the plunge,” he said with a laugh. “Over the years the event has grown and grown and grown. What we’ve tried to focus on the last several years is people developing teams of plungers. We have a lot of teams that do it — not only in schools but businesses, and just individuals who put it together. It’s just become one of those things that people do for the first time, and then they decide they want to do it again.”

In its first year, Buzby said, most plungers were people who had a passion for Special Olympics — long-time volunteers, “They were our coaches, they were our family members and a few athletes.

“It has now gotten to the point where people plunge because it’s the plunge. And then they find out it’s for Special Olympics, and they think it’s even cooler.”

After having to move the plunge to Rehoboth Beach a number of years ago due to the state park closing for a nor’easter, the non-profit realized the potential of holding the event downtown in the resort town.

And with the event growing to nearly 4,000 plungers each year, the weekend has become more than just a quick dip into the ocean.

“We created the weekend festival. It all started with the businesses offering our Bears discounts,” explained Buzby. “That was a way to get the businesses involved and, of course, the businesses wanted to be involved, because it’s one of the busier weekends, if not the busiest weekend, of the winter season.

“It’s been a great partnership with the City of Rehoboth as a whole, but in particular the businesses and retailers, with this event.”

On Saturday, Feb. 2, there will be a sand-sculpting demonstration from 11 a.m. to 3 p.m. on the beach south of Rehoboth Avenue. A culinary Fire & Ice event featuring ice cream and wing samples will take place at the Rehoboth Beach Fire Department from noon to 2 p.m. (or while supplies last). The 5K Run to the Plunge will begin at 1 p.m., and the Restaurant Chili Tasting Contest will run from 2:30 p.m. to 5 p.m.

“We thought, ‘How else can we engage the City of Rehoboth and what else can we give the people of Rehoboth to do?’ Over 500 people take part in the Chili Contest. For $10, you get to go around to 12 to 14 different restaurants and sample their chili. That has become a very popular event. We say, probably of all the events, that’s the one where most people come and do and don’t plunge.

“We wanted to draw people to the event and to the weekend, in the hopes that they would eventually want to plunge. We’ve heard a lot of stories where that’s happened.”

In addition, restaurants and retailers throughout the Rehoboth Beach area provide registered “Bears” with special discounts.

“There are flags that hang outside of any business or restaurant offering Bear discounts. All you have to do is go in and show your wristband, and sometimes it’s a free appetizer, sometimes it’s 10 percent off your bill, sometimes it’s buy-one-get-one-free.”

Those who participate in the plunge can register and/or check-in at the newly renovated Rehoboth Beach Convention Center. Those who wish to do so on Sunday should visit the tents near the bandstand on Rehoboth Avenue.

In its 27 years, the plunge has raised a total of $11 million for Special Olympics Delaware.

“We’re getting close to raising nearly a million dollars every year,” said Buzby. “Every single dollar stays in the state of Delaware and goes toward our program, which benefits more than 4,000 children and adults with intellectual disabilities.”

Buzby said Delaware is the only state in the country where an athlete participates completely free of charge, regardless of their family’s income bracket.

“We provide uniforms, we provide training facilities, we provide equipment, and we provide competition opportunities for every single one of those 4,000-plus people. And it’s completely free for them.”

Buzby said the plunge is the largest fundraising event for SODE every year.

“It’s our largest fundraiser, not only in terms of dollars, but — just as importantly — in the number of people we are able to touch to make them aware of our program, and the benefits for all of the athletes.

“We’ll have more than 25,000 people who will hear the term ‘Special Olympics’ and, hopefully, learn a little more about it during that weekend, whether they’re running, eating chili, plunging or just stumble upon the event because they happen to be in Rehoboth Beach. That is what we always say — we need the money, we want the people and the numbers to be up, but we can’t pay for the impact that the event of this magnitude is able to create for us from a marketing standpoint.”

“We always say we’d love to get to 4,000 bears. We would love to say we’ve raised $1 million this year. It would be the first time we’ve done that.”

According to its website, the mission of Special Olympics Delaware is to “provide year-round sports training and athletic competition in a variety of Olympic-type sports for more than 4,200 children and adults with intellectual disabilities, giving them continuing opportunities to develop physical fitness, demonstrate courage, experience joy and participate in a sharing of gifts, skills and friendship with their families, other Special Olympics athletes and the community.”

“Special Olympics Delaware offers 19 sports year-round and it gives our athletes the opportunity to reap the same benefits of being part of sports that everybody else benefits from,” said Buzby. “It increases their self-esteem, they become more physically fit, they develop confidence.

“Our hope is that all of that will also overlap into their everyday life. If they are participating in a church bowling activity, they know what they’re doing because they’ve experienced it through Special Olympics. They know how to roll the ball, they know they need special shoes, they know how to keep score.

“On top of that, we want it to overlap into the workplace and into the schools. When our confidence level is high, we’re going to be better at whatever we’re doing. We hope by providing sports to our athletes, they’re able to develop the confidence that with instruction and training, be able to perform on the courts and in the pool and on the track, and then also perform in the classroom, workplace, and in the community.”