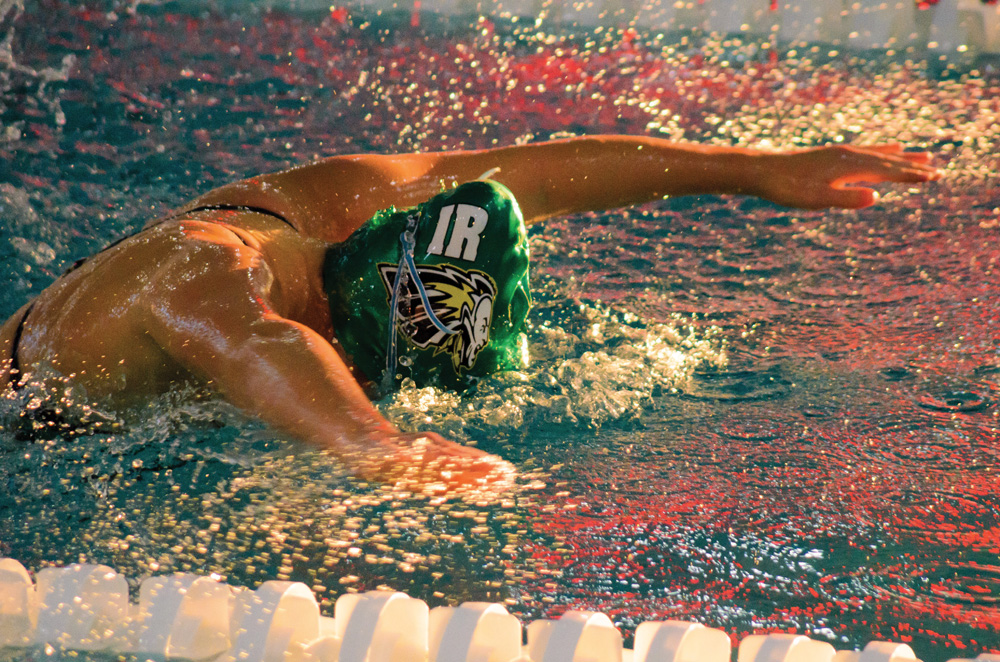 Graduation can certainly take its toll on high-school athletic programs. Bigger schools are generally fortunate in having the numbers to make the pain a little more bearable when a team loses significant contributors. Small schools are not as fortunate and can face rebuilding a program when graduating seniors’ scholastic careers come to a close.

Potentially, such could be the case for the Indian River High School boys’ swimming team this year.

Following an impressive 11-1 overall regular season performance during the 2017-2018 season, the Indians find themselves looking to fill holes left by several talented individuals who have moved on.

“We lost a lot of talented seniors, and well-rounded swimmers,” head coach Colin Crandell said. “This year will serve to rebuild and strengthen our team.”

Key returnees for the Indians this year include senior Michael Barnes, who will participate in the sprint freestyle. Classmate Mitch McGee will be swimming in the distance free events. Sophomore Declan Burke will also take part in the freestyle events, but will see his time split between the middle- and long-distance events.

Crandell, who is an eighth-grade science teacher at Selbyville Middle School, this week was still assessing his newcomers to find out what other holes he will be able to plug.

“Most of my newcomers have never swam before,” he said. “It’s hard for me to predict their future when, currently, we are teaching them how to swim each stroke. What I can say is that they are learning fast and are athletically talented. My hope for them is to mature quickly and be ready to race when the season opens.”

On the girls’ side of things, it was a tough road… um… lane to swim last year, with small numbers on the roster, which led to a 4-8 finish.

Head coach Dana Schaefer said she is hoping that seven of the returning swimmers will help to develop the other girls on the team.

A trio of senior captains leads the charge for the Indians. Kaitlyn Kreiser, Amber Hills and Grace Furman are those seniors.

Kreiser achieved many of her best times a year ago swimming in the 200 medley, 200 freestyle and 400 freestyle relays. Hills made dramatic improvements over the course of the year in the 200 freestyle. Furman led the team in the 100 backstroke, while also being a reliable performer in the 200 individual medley.

Junior Elizabeth Towne has seen her work in the off-season pay off in early practices, with time drops in the 50 freestyle, 100 freestyle and 100 backstroke. Fellow junior Emma Kelly is the team’s most versatile swimmer, competing in all but one event last year. Schaefer said she thinks Kelly will “be a role model to all the new swimmers.”

“Our young team will benefit from the eager newcomers on the team, some of whom have some junior-lifeguard and Sea Colony Sharks swim-team experience,” Schaefer added. “We will look for freshman Madison Bemis, sophomore Maelyn Bryan, freshman Nadia Czyczewski, and freshman Emma Rickards to score points in a variety of events.

With a deeper and ever-improving squad, Schaefer said she is very hopeful, and even more optimistic in the potential her team will have over the course of the season.

“The depth of our developing team this year enables us to put more point-scoring competitors in each event,” Schaefer concluded. “As we congratulate each girl for her new best times, we’ll also celebrate scoring more points in meets. It’s the personal achievements — the little victories — that are what competitive swimming is all about. Winning is a bonus.”

The Indians will open the season with a meet against Sussex Academy on Friday, Dec. 8, at 3:30 p.m. Their 12-match slate runs through Feb. 1, 2019, before the Henlopen Athletic Conference championship meet, which will take place on Saturday, Feb. 10.